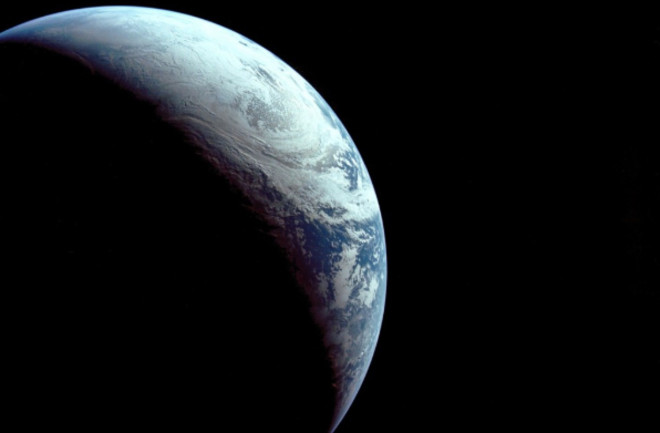 Space, the final frontier,” announces James T. Kirk at the start of the first Star Trek episode. As the spaceship Enterprise flies past the screen, the voice sounds as though it was recorded in a very reverberant cathedral. I know space is a big place, but where are the reflections meant to be coming from? And anyway, space is silent or, to quote the catchy tag line from the 1979 movie Alien, “in space, no one can hear you scream.”

For an astronaut unfortunate enough to be caught outside the spaceship without a space suit, screaming to occupy the moments before asphyxiation would be pointless, as there are no air molecules to carry the sound waves. But Hollywood does not let anything as trivial as physics get in the way of a compelling soundtrack. The latest Star Trek film showed the outside of the soaring Enterprise accompanied by lots of powerful engine noises; the photon torpedoes sounded pretty impressive as well.

When I think of the inside of a real spacecraft, I picture people floating serenely and gracefully in zero gravity. I met NASA astronaut Ron Garan in early 2012, when he had just returned from a six-month mission on board the International Space Station. He explained to me that the sonic environment in a real spacecraft is a long way from being serene. Even outside on a spacewalk (his previous mission had included a walk that lasted six and a half hours), there is no silence.

Indeed, it would have been worrying if there had been, because it would have meant that the pumps circulating air for him to breathe had stopped working. Spacecraft are full of noisy mechanical devices, such as refrigerators, air-conditioning units, and fans. Theoretically, the noise could be reduced, but quieter, heavier machines would be expensive to lift into orbit.

Studies on a single space shuttle flight found temporary partial deafness in the crew. Inside the International Space Station (ISS) it is so loud that some fear for the astronauts’ hearing. At its worst, the noise level in sleep stations was about the same as in a very noisy office (65 decibels). An article in New Scientist reported, “Astronauts on the ISS used to have to wear ear plugs all day, but are now only [required to] wear them for 2 to 3 hours per work day.” The need for earplugs, even for part of the day, indicates how hostile the soundscape is. Squidgy foam earplugs can reduce sound by about 20–30 decibels. The higher levels of carbon dioxide and atmospheric contaminants that exist at zero gravity in spacecraft might also make the inner ear more susceptible to noise damage.

Outer space might be devoid of audible sound, but that is not true of other planets, and scientists have put microphones on spacecraft such as the Huygens probe to Saturn’s moon Titan to record it. As long as a planet or moon has an atmosphere—some gas clinging to the planet—there is sound. Microphones have the advantage of being light, needing little power, and being able to hear things hidden from cameras. Mind you, the audio recorded from Titan as the Huygens probe descended through the atmosphere is not very otherworldly. It reminded me of wind rushing by an open car window while driving on a highway. However, when I consider where it was recorded, almost a billion miles away from Earth, this mundane sound feels much more exciting.

If a pipe organ were taken to Mars for a performance of Bach’s Toccata and Fugue in D Minor, the astronauts would find the notes coming out of their musical instruments at a lower frequency. The atmosphere of Mars would transpose the music to roughly G-sharp minor.

The frequency of the note produced by an organ pipe depends on the time it takes sound to travel up and down the length of the tube. Because Mars has a thin, cold atmosphere of carbon dioxide and nitrogen, sound moves at about two-thirds the speed it does on Earth. The slower round-trip up and down the organ pipe produces a lower frequency.

Given the toxic gases in the atmosphere, visiting astronauts would not be taking their helmets off to sing. But if someone did dare to do this, the voice would drop in pitch like the organ pipe, turning tenors into Barry White soundalikes. Unfortunately, the sexy voice would not carry very far, because Mars’s thin atmosphere is almost a vacuum.

Venus has a very dense atmosphere, which would slow down the vibration of the astronaut’s vocal folds (vocal cords) and lower the pitch of the voice. However, sound travels faster in the Venusian atmosphere, which would make the resonances of the mouth and throat rise. As a result, the astronaut’s voice would sound squeaky, as happens when someone talks after breathing helium.

Tim Leighton, from the University of Southampton, suggests that together, these effects would make an astronaut sound like a bass Smurf.

Excerpted from The Sound Book by Trevor Cox. Copyright 2014 by Trevor Cox. With permission of the publisher, W. W. Norton & Company, Inc. All rights reserved.
1 free article left
Want More? Get unlimited access for as low as $1.99/month
Subscribe