What Does Mars Sound Like? InSight Just Recorded Martian Wind 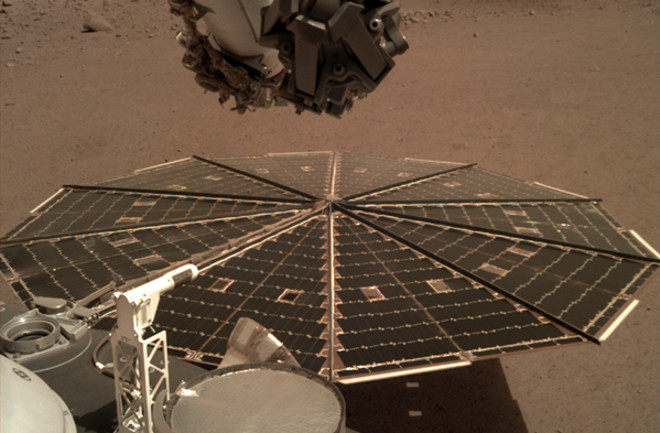 On November 26, NASA’s Interior Exploration using Seismic Investigations, Geodesy and Heat Transport (InSight) lander successfully touched down on Mars. Though the probe’s main goal is to explore the planet’s interior, its sophisticated instruments are also offering a unique way to explore the Martian surface — by recording the sound of Martian wind.

The recordings capture the sounds of winds gusting through Elysium Planitia, InSight’s Martian home, at about 10–15 mph (16–24 kph) on December 1. Pressure changes generated by the moving air were picked up directly by InSight’s Auxiliary Payload Sensor Subsystem (APSS), which is designed to record meteorological data. “That’s literally what sound is — changes in air pressure,” said APSS science lead Don Banfield of Cornell University in a press release. “You hear that whenever you speak to someone across the room.”

The wind also rattled InSight’s two solar panels, each of which is about 7 feet (2 meters) in diameter, causing them to vibrate like a flag flapping in the wind. The lander’s vibrations were subsequently picked up by the Seismic Experiment for Interior Structure (SEIS).

In this case, “It’s like InSight is cupping its ears and hearing the Mars wind beating on it,” said InSight team member Tom Pike of Imperial College London. He added, “When we looked at the direction of the lander vibrations coming from the solar panels, it matches the expected wind direction at our landing site.” That direction is northwest to southeast — the same direction as dust devil streaks visible on the surface from orbit.

APSS picked up audio at about 10 Hz — below the range of human hearing. To make the sounds more audible in the video, the data were sped up 100x, which also shifted the frequency higher. While APSS could continue to record the wind, SEIS, which has short-period sensors capable of recording vibrations up to 50 Hz, will soon be shielded from future gusts. To study the planet’s interior through the seismic waves generated by marsquakes, the instrument will be lowered to the surface and covered with a protective dome. That dome will isolate SEIS from potential sources of noise, including variations in air pressure and temperature. Though the instrument might still feel vibrations from the lander, it will only sense those vibrations if they’re transmitted through the Martian soil to the sensor.

In addition to the potential for similar transmissions from InSight, NASA’s Mars 2020 rover will carry two microphones to capture sound during the rover’s landing and science operations.