This Tyrannosaurus has holes in its jaw, and scientists still struggle with understanding why. 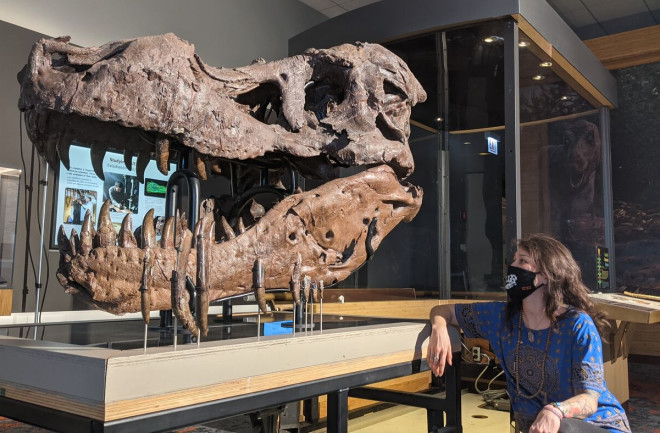 The Tyrannosaurus rex at the Chicago Field Museum, affectionately known as "Sue," ranks among the biggest and best-preserved specimens of T. Rex in the world. That said, the fossilized dinosaur is far from flawless. In fact, the 67-million-year-old specimen has several strange holes in its jaw, and scientists have long wondered why.

A study in Cretaceous Research recently states that their search for answers is far from over. Rejecting the popular theory that these holes came from a common protozoan parasite, this new study stresses that the cause of these injuries remains unknown.

First found in 1990, Sue’s skeleton indicates that the dinosaur suffered from a variety of injuries and aliments throughout its 33 years. The strangest of these resulted in a smattering of sizable holes — some almost two inches across — in Sue’s lower left jawbone. And though the same sorts of injuries have appeared in several other T. Rex skulls over the years, the origin of these holes isn't clear.

"These holes in Sue’s jaw have been a mystery for decades," says Jingmai O’Connor, a study author and a paleontologist at Chicago’s Field Museum, in a press release. "Nobody knows how they formed, and there have been lots of guesses."

One popular theory among scientists states that Sue had been infected by a species of protozoan parasite similar to Trichomonas vaginalis, which causes a condition called trichomoniasis in humans and several other animal species to this day.

"Trichomoniasis is found in birds, and there’s a falcon specimen with damage to its jaw. So, some paleontologists thought that a Trichomonas-like protozoan might have caused similar damage to Sue," O’Connor says in a press release. "For this study, we wanted to compare the damage in Sue’s jaw with Trichomonas damage in other animals to see if the hypothesis fit."

Ultimately, O’Connor and two colleagues used these comparisons to conclude that Sue’s injuries were actually inconsistent with trichomoniasis. They were likely produced by some other cause beyond protozoan parasites.

To arrive at this result, the team turned to the skulls of other animals infected by Trichomonas vaginalis. The realization that these other specimens had no holes in their jawbones allowed the researchers to outright reject the theory that Sue’s injuries resulted from trichomoniasis.

"You don't see jaw holes," says O’Connor of these other animals in a press release. "You do see signs of infection, and they are in the back of the throat, but there aren’t holes bored through the jaw like we see in Sue."

Aiming to come up with an alternative theory, the team then assessed the injuries in Sue’s skull alongside several other types of injuries in the skulls of other species, including those incurred by the violent piercing or penetration of sharp objects.

"We found that Sue’s injuries were consistent with these other examples of bone injury and healing. There are similar little spurs of bone reforming," O’Connor says in a press release. "Whatever caused these holes didn’t kill Sue, and the animal survived long enough for the bones to begin repairing themselves."

Though the team is not entirely sure what this may mean for Sue, one possible explanation suggests that the holes were incurred by the teeth or the claws of another T. Rex during the processes of fighting or mating. That said, the study authors say that many other potential theories could account for Sue’s injuries, many of which remain to be fleshed out by paleontologists in the future.

"The more I started learning about these jaw holes, the more I was like, 'This is really weird,'" concludes O’Connor in a press release. "We still don’t know."