A food scientist explains why soaking a turkey in a water and salt solution makes it juicier. 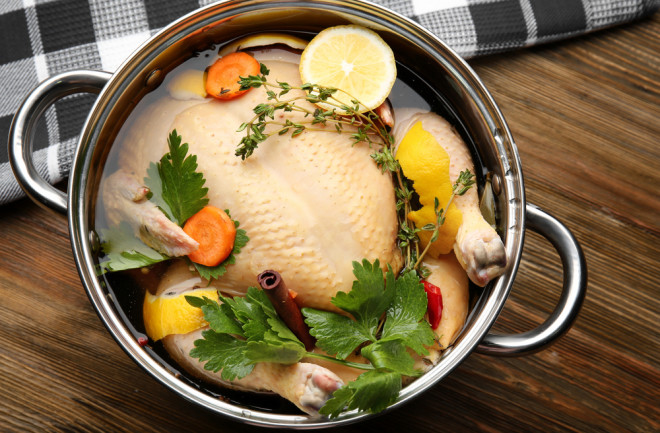 Everyone cooking on Thanksgiving dreads the same thing: a dry turkey. Tough, chewy meat can suck the enjoyment out of a meal, which is why people might consider submerging their holiday bird in a brine overnight.

The strategy has kept meats tender for centuries — even ancient Romans had recipes for making a tasty boar ham in seawater. Brining has likely earned its place in cookbooks through time because it’s one of the most effective tactics for ensuring the centerpiece of your meal is actually something your family wants to eat. A saltwater bath transforms proteins and allows them to hold onto more moisture — a change that both softens meat and makes it juicier. This chemical transformation is so helpful that many turkey producers have perfected a similar — but much faster — procedure that they use in processing to boost your Thanksgiving bird’s palatability even before you take it home.

You might think that the brining process is as simple as submerging food in salty water to get moisture and salt inside. But what's happening on a chemical level is a bit more complicated than that. The goal isn't to get the brine to seep into the meat, per se. If that's all that was happening, any added water content would disappear during the cooking process, says Casey Owens, a food scientist at the University of Arkansas. Rather, the act of brining actually causes chemical and structural changes in the meat itself that primes it to suck up moisture. “What you want is for the proteins and the meat to be able to hold on to that water.”

When table salt dissolves in water, it separates into two atoms — sodium and chloride. This separation leaves each atom with an unusual number of electrons, which makes them take on a positive or negative charge — just like a magnet. These unbalanced atoms — called ions — float around in the water and are attracted to the meat. Muscle cells in the flesh also have positively and negatively-charged regions. Opposites attract, with the negatively-charged dissolved salt ions binding onto the positively-charged muscle cells, and vice versa.

Meat soaked in a brine will slowly absorb the dissolved salt, and soon, water will follow. The negatively charged ions from the dissolved salt actually attach themselves to muscle fibers and start to crowd together — but they then repel one another. The mutual push physically opens a tiny gap in the muscle tissue, which allows water to come inside. Post-cooking, each bite is juicier thanks to the water that's drawn into each cell.

Saltwater also tenderizes meat. Those same muscle fibers start to dissolve and soften slightly in brine. Food taste tests have shown that we also tend to perceive juicier meats as more tender, regardless of the physical differences in texture, Owens says.

White meats, like chicken and turkey breast, have lower fat content and release more water in the cooking process, Owens says. Brining is particularly useful for people cooking poultry and want to avoid potentially dry, tough parts of a bird. The conventional at-home brining process works, but it takes a while for the saltwater to move its way through the entire piece of meat. Recipes typically recommend eight to 12 hour soaks for turkeys. Keep in mind that this means dedicating precious fridge space to the brining process, as it’s a health hazard to let raw meat sit out on the counter for that duration of time. If you're cooking a big turkey, the saltwater might not reach the center of the bird at all, Owens says.

Turkey producers get around this problem by injecting the meat with brine. “They don't have the luxury of holding something overnight, necessarily,” Owens says. “[They're] producing to get the product out the door and to the grocery store.”

Instead of waiting for saltwater to migrate through turkey from the outside, processing facilities send turkeys down a conveyor belt to a bank of spring-loaded needles that descend together, contouring to the shape of the bird and pushing uniform levels of saltwater into the meat in 40 to 50 different places. The injections help turkey producers counteract the likelihood of someone drying up (and not liking) their food after they cook it at home. Commercially-brined turkeys are generally labeled as “enhanced” or “marinated with saltwater” on their packaging, says Owens. Sometimes packages have a note about containing a certain percentage of salt and a flavoring solution. But if you opt for a pre-treated bird, Owens recommends not brining it at home, as it could make the meat too salty. Instead, apply a rub to ramp up flavor on the surface.

Beyond that, brining can only go so far when it comes to turkey perfection. A patient and loving brine bath can be a wasted step if you overcook your bird. This tendency has an easy solution, one that Owens plans to bring up in her lectures with students. “We're going to talk about cooking, and I'll probably get on my soapbox,” she says. “You all need a thermometer in your kitchen.” Cooking the turkey to 165 degrees Fahrenheit in its thickest parts, like the thigh and breast meat, ensures the bird is cooked to perfection. Plus, it'll stop you from getting sick from any potential pathogens.

Visual cues alone — the color of the juice running from the meat, or texture changes, for example — can't tell you if harmful bacteria in the meat has been killed. A recent study found that 40 percent of people said they relied on chicken texture to assess doneness, yet there was no correlation between how the meat looked and whether it carried harmful bacteria. A meat thermometer is the only way to ensure your bird meets the crucial food safety threshold. Surpassing that temperature doesn't make the meat any safer to consume, Owens says; it'll just dry it out.

So, go to town on your brine — or don’t, if you’d like the turkey producer to handle that step for you. But when coming home from the store, make sure you have other essential tools, like a thermometer, on hand to ensure a delicious and safe Thanksgiving.