What An Ancient Tooth Tells Us About The Denisovans

Scientists know little about this extinct subspecies that fall between modern humans and Neanderthals, named Denisovans, and this recent discovery could be proof they lived outside of Siberia. 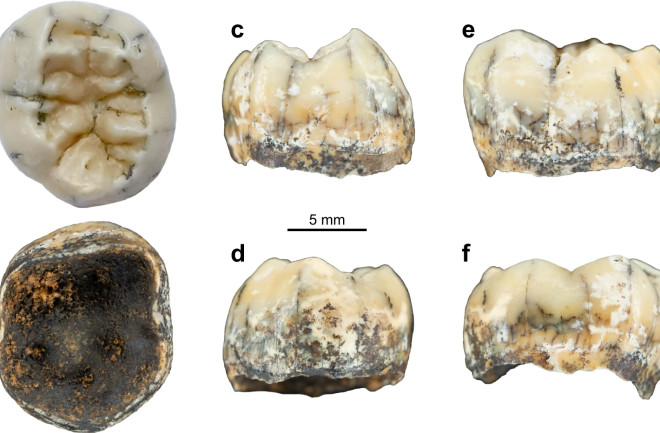 When paleoanthropologist Laura Shackelford first explored a tiny remote cave in northern Laos, she didn't expect to find anything compelling. She was used to working in sediment at the bottom of caves and didn't see anything of interest. But then she shined her flashlight towards the cave's walls and immediately noticed a mosaic of prehistoric teeth that had formed on its surface.

The cave consisted of breccia: rocks, minerals and fossilized teeth that landslides or water events form when crushing sediment into a cave's walls. The force is so strong that rocks and teeth are usually the only things solid enough to survive.

"It looked like fruit in a fruitcake, the tiny pieces stuck inside," says Shackelford.

The team had uncovered a goldmine of prehistoric teeth, and one of them looked different from the rest. It didn't come from a giant tapir, a deer or an ancient elephant. Rather, it was an odd-looking molar. "We knew it looked human, but it didn't look quite right," Shackelford says.

The team's findings, published in a recent edition of Nature Communications, show that the molar had several features that separated it from modern humans. The excavated tooth displayed differences in its surface and where it meets the gums, says Shackelford.

At first, researchers assumed it was Homo erectus, a species of ancient humans previously found in the area. But then they compared the tooth to images of a Denisovan mandible found on the Tibetan Plateau and realized they were onto something big. The prehistoric tooth looked to be a match.

Additionally, the tooth wasn't finished developing, and it had never been used. This meant the tooth had not pushed through the gum, so it likely belonged to a young child who hadn't yet sprouted their adult molars. Using the proteins that form from DNA, researchers could also discern that it was a little girl.

Clues to an Extinct Species

Denisovans are an extinct subspecies that fall between modern humans and Neanderthals that once lived in what is now Siberia. This tooth is significant because it tells us that Denisovans lived outside Siberia. We've already speculated that this could be true because people today with Denisovan DNA are often found all over Southeast Asia. But the tooth provides actual evidence.

"Now we know that Denisovans not only lived and thrived in very cool environments, we also know they lived in tropical environments. It shows that they had the same ability as humans to adapt to different climates," says Shackelford.

It's also important because tropical climates like Laos typically don't have as many preserved fossils because of the climate, says Chris Stringer, a paleoanthropologist at the London Natural History Museum.

"Any new human fossil from an under-represented area like Laos is important, especially if it's a non-sapiens fossil, as this clearly seems to be," says Stringer, "If it is a Denisovan, it would extend the known range of these ancient humans into Southeast Asia, where we previously guessed they must have lived."

Still, Stringer cautions that we shouldn't be so quick to call it a Denisovan because researchers aren't entirely sure. "The authors have done a great job in describing and dating the find, but I'd prefer to say it's a putative Denisovan fossil," he says.

Researchers are only beginning to learn about Denisovans because we have so few high-quality specimens. Many of the fossils we've gathered in the past may turn out to be Denisovan, but that's not completely clear. We don't have enough specimens to compare them to, and we don't have any high-quality ancient DNA, says Stringer. Still, paleontologists see this as a step in the right direction, and they're excited to explore a different part of the world that we now know could hold more clues to this extinct species.