What a Half-Vulcan Taught Us About Science 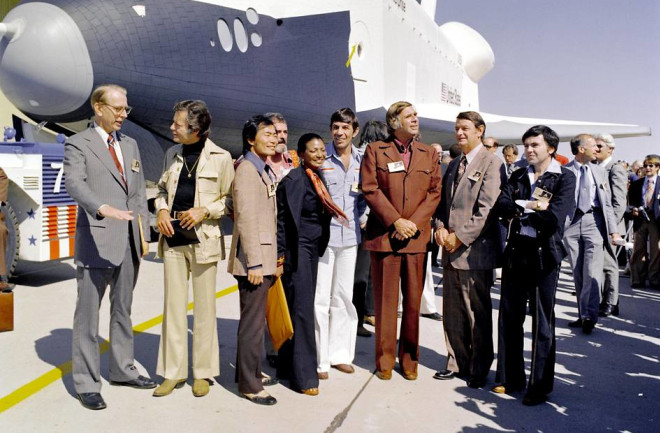 Leonard Nimoy (center) with most of the Star Trek cast and NASA administrator James Fletcher (far left) at the 1976 unveiling of the Space Shuttle Enterprise. (Credit: NASA) The death of Leonard Nimoy yesterday inspired an outpouring of moving testimonials about his vast impact: as an actor, as a supporter of science and smart science fiction, as a voice of reason in media both traditional and digital. You can find these memorials all over Twitter, often accompanied by incredible photos, such as this on-set candid moment and a look at his sensitive moment as an advice columnist. Look at #LLAP (live long and prosper) and see what I mean. Even President Obama weighed in with an appreciation of Nimoy. Nimoy's indelible, decades-long performance as Mr. Spock is one of the greatest performances ever in science fiction. He was, in many ways, the central axis of Star Trek, and Trek's inspiring influence on three generations of young researchers is widely acknowledged. Spock's great importance as a role model of rational thought is also undeniable; in his tribute, Obama praised the character as "cool, logical, big-eared and level-headed." Spock's catch phrase was "fascinating." No wonder that Nimoy was so beloved by so many scientists. But the most interesting aspect of Spock is that he was not just a logical Vulcan. He was half-human, and the war between his ostensibly "rational" and "emotional" sides provided some remarkably subtle and insightful commentary on how science really works. Psychological duality is a staple of science fiction and fantasy. It defines every superhero who lives a civilian life but also dons a costume to act out his or her superpowers. It is the essence of characters ranging from the Incredible Hulk (id and ego, split in two!) to Harry Potter (the Muggle turned wizard). Spock follows in that tradition, and yet is truly unique. Neither the human nor the Vulcan side was his "true" personality. The struggle between the two sides was typically portrayed as his Vulcan side trying to suppress his base human impulses, and yet in the Star Trek universe--and especially in Nimoy's portrayal--it was clear that both sides needed each other equally. Put in pop-psychology terms, Spock had both emotional intelligence and rational intelligence, and he relied on both to succeed.

Logic and emotion, tightly intertwined: That was the genius of Leonard Nimoy's Spock. (Credit: CBS/Paramount/Desilu) Anyone who has closely observed scientists in action will recognize this balance. The Vulcan side of science is a simplification; it is a caricature. Cold logic is one essential element, but it is not sufficient. Everything from the initial decision to pursue a career in science (hardly the easiest or most lucrative way to make a living) to the choice of specific field (why do some find meaning in genetics, others in cosmology?) is an emotional decision. New theories are inspired by hunches and daydreams. Today, images of other planets and moons seem like the very epitome of a scientific investigation, but when Bruce Murray first proposed putting cameras on space probes he was widely derided for favoring showmanship over rational utility. As science officer on the Enterprise, Spock was called on to parse data but also to offer theories and interpretations. Often he would openly admit that he lacked enough information even to propose an explanation--a style of open curiosity that is rarely seen in popular fiction. I can think of only a few other similar examples. (One notable companion to Spock, though far less famous: Professor Victor Bergman from the even more short-lived show Space: 1999, who seemed to relish saying "I don't know!" when his commander asked him for his scientific opinion. My friend Phil Plait has admiringly commented on this character, too.) Star Trek made good use of Spock's willingness to confront the limits of knowledge. In the episode The Devil in the Dark, Spock confronts the enigma of the Horta, a silicon-based life form, and declares, "It is not life as we know or understand it. Yet it is obviously alive, it exists." This line is often rephrased--inaccurately, but in the right spirit--as "It's life, Jim, but not as we know it." This mix of knowledge and self-aware ignorance inspires much of today's astrobiology. Many Trek episodes also called on Spock to consider obscure or controversial theories about time travel, psychological regression, and the like. Speculation without adequate data is not strictly rational (ie, not strictly Vulcan), but it is a crucial component in deciding how to direct further research--or, when necessary, how to make intelligent-guess decisions.

During the first season of Star Trek, Nimoy toured the 8-year-old Goddard Space Flight Center. (Credit: NASA/GSFC) Some of Nimoy's best-loved performances in Star Trek were built around stories that brought his human side to the fore (This Side of Paradise) or that exposed the hidden, illogical undercurrents of his Vulcan nature (Amok Time). On the surface, these stories are about the inherent contradictions between logic and emotion embodied in Spock's character. But what is so effective about Spock, and about Nimoy's sly acting style, is that the Vulcan and human sides are never fully walled off from each other. Even when he is emotional, he is still a precise observer of detail; even when he is rational, he still embraces intuition. Spock's whole friendship with Captain Kirk is predicated on the notion that he speaks with both logical and emotional truth. Isn't that a fine description of a good science adviser? Isn't that a good description of a good scientist? The idea that scientists even aspire to be pure Vulcan is fiction. Paradoxically, Nimoy's fictional portrayal of a half-Vulan, half-human science officer has much more ring of truth. Look at Albert Einstein and Charles Darwin, Isaac Newton and Louis Pasteur--they were all extraordinarily talented at reading and analyzing data, absolutely. But they were also guided by an emotional attraction to certain questions and by intuitions about the best way to tackle them. In The Galileo Seven, Spock finds himself in an unwanted leadership position, learning the hard way that pure logic is not always effective, or even relevant, in such situations. Innumerable scientists have landed in the same situation, albeit not while marooned on a planet populated by hostile humanioids (so far as I know). The duality of Spock's character speaks directly to the challenges of researchers who become lab directors, university administrators, heads of large research teams, or presidential science advisers. The Galileo Seven is regarded as a middling Trek episode by many fans, but Nimoy's nuanced performance as he struggles to reconcile two modes of problem-solving is a quiet highlight of the whole series. Star Trek even experimented with applying the duality of Spock's character to that of Captain Kirk. In The Enemy Within, a transporter accident divides Kirk into two people, one with all the passion and one with all the intellect. Neither can live without the other, just as Spock's two sides are essential to the meaning and appeal of his character. The turnaround doesn't exactly work; William Shatner's performance in this episode is notoriously hammy and over the top. Nevertheless, Trek remained impressively on-message. Paraphrasing Einstein, logic without emotion is lame; emotion without logic is blind.

Astronaut Terry Virts, aboard the International Space Station, gave the Vulcan salute as a tribute to Nimoy. (Credit: Virts/NASA) Leonard Nimoy was much more than Spock, as all those testimonials make clear. Over the years he parlayed his fame and talent into a wide range of roles in movies and TV, books, poetry, directing, social media, and even, um, music. Not all of his experiments were successful. But all of them were marked by a blend of intellectual rigor and spontaneous looseness, the talents that made his portrayal of Spock so indelible. Science could not have asked for a better role model about what it is, and what it is not. Follow me on Twitter:@coreyspowell