We Still Don't Know How to Deal With Moon Dust 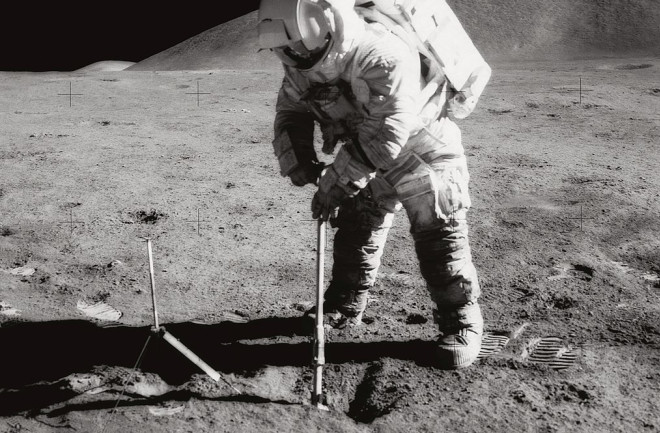 Astronaut James B. Irwin, lunar module pilot, uses a scoop in making a trench in the lunar soil during Apollo 15. (Credit: NASA)

U.S. President Donald Trump has made returning to the moon a priority, and China and India both have lunar landers in the works. The endeavor is difficult for myriad reasons, but one borders on the prosaic — moon dust.

The moon is a dirty place. Apollo astronauts reported returning to their lander covered in dust that smelled of spent gunpowder — astronaut Alan Bean even worried that dust floating around the cabin was making it too difficult to breathe as they lifted off. The dust coated spacesuits, instruments, visors and skin. It occasionally caused serious problems. One astronaut, Harrison Schmitt, reported a mild allergic reaction, similar to hay fever, after a moon walk, and some scientists worry the fine particles could wreak havoc on our lungs.

A seismometer deployed by Apollo 11 — the first instrument placed on the moon — failed soon thereafter when dust caused it to overheat. China’s Yutu rover died in 2014, and moon dust was a top suspect. Aside from issues with overheating, the grit can cause parts to wear out quickly, clog up seals, obscure vision, degrade traction and result in false instrument readings. It’s a real problem.

The dust comes from meteorite impacts, which throw up and briefly melt lunar rock. The droplets condense into a kind of vapor, which settles back to the ground as dust. Billions of years of such impacts have made for a lunar surface that’s very dusty indeed.

The dust is so frustrating, in part, because its so small. Lunar dust measures in at just 70 micrometers, or 0.07 millimeters, in diameter on average. That’s around the size of the very finest grains of sand, or silt. To add to the annoyance, lunar dust carries a slight electric charge, a result of solar radiation stripping electrons away, and that property serves to make the dust even stickier. Its structure doesn’t help, either. Due to the lack of wind-swept erosion, the grains are barbed and jagged, which helps them stick to everything.

There are surprisingly few solutions to such a seemingly simple problem. Astronauts on some Apollo missions carried a special brush with them to help clean off spacesuits before re-entering the lander. A vacuum was included on some missions, which worked, but made for tedious work. Because the dust is magnetic, one researcher has proposed simply using magnets in a filter to collect it, though it hasn’t been tried on the moon yet. Keeping dust off of external equipment is a more daunting task, and one that’s likely to continue to be a problem.

So, should NASA manage to navigate the political and technical challenges necessary to get a moon mission off the ground, they’ll come face to face with an old nemesis once again. Perhaps this time, we’ll be better prepared.