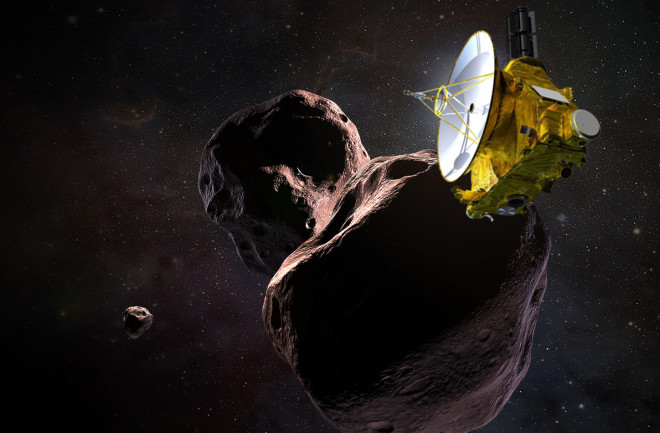 A billion miles past Pluto, at 12:33 a.m. EST tonight on New Year’s Day, NASA’s New Horizons spacecraft will swoop in close to the most distant object humans will have ever visited. For just a moment, the craft will fly within 2,200 miles (3,540 km) of Ultima Thule, a primitive space rock from the Kuiper Belt far beyond Neptune.

This will be over three times closer than the craft flew to Pluto, according to New Horizons principal investigator Alan Stern.

If New Horizons successfully completes this flyby, the encounter may tell us invaluable information about Kuiper Belt Objects like Ultima Thule. Many have likely remained the same since the dawn of the solar system, making them essentially time capsules for astronomers. This flyby follows a three-week search through New Horizon imagery for debris or other objects near Ultima Thule that might damage the spacecraft during the encounter. But we won’t know for sure that the spacecraft survived until the first data from closest approach streams back tomorrow morning.

On December 22, the United States government shut down for the third time this year. As a result, most NASA personnel were furloughed, though the flyby itself won’t be affected. You can watch the flyby live via NASA TV.

The webcast will begin at 12:15 a.m. EST and include live coverage and real-time flyby simulations. Signal acquisition should happen around 9:45 a.m. EST New Year’s Day. In addition to the webcast, Alan Stern and the rest of the New Horizons mission team continues to answer questions from the public in a Reddit AMA (Ask Me Anything) forum.