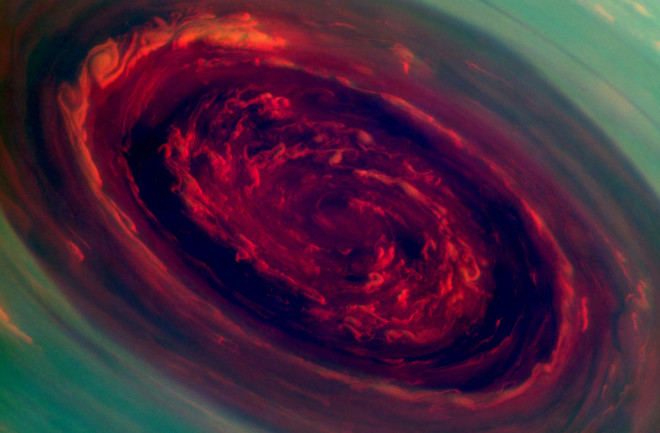 The spinning vortex of Saturn's north polar storm resembles a deep red rose of giant proportions surrounded by green foliage in this false-color image from NASA's Cassini spacecraft. Image courtesy of NASA/JPL-Caltech/SSI The Cassini spacecraft has provided NASA with the first visible-light glimpse of a massive weather system circling Saturn’s north pole. The spinning storm is 20 times larger than the average hurricane on Earth. Cassini detected a vortex-like weather phenomenon inside a mysterious, hexagonally shaped jet stream near Saturn’s north pole shortly after arriving at the planet in 2004, but Saturn’s winter prevented any visible light viewing. Since its equinox in 2009, however, Saturn has been receiving more sunlight at its north pole, illuminating the hurricane-like system, which scientists believe has been ongoing, possibly for years. http://www.youtube.com/watch?v=HesYzfjQZ5U This NASA video clearly shows the system’s cloudless eye and counterclockwise spin, evocative of our planet’s hurricanes, though its size — the eye alone is 1,250 miles across — and speed, clocking in with 300 mile an hour winds, are on a far more impressive scale. NASA researchers hope to determine whether the system is a hurricane and, if so, how it sustains itself given the limited amount of water on Saturn. Video courtesy of NASA