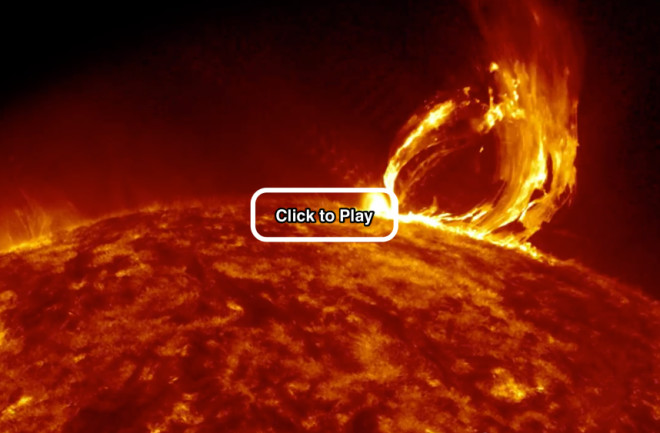 Source: NASA Goddard Spaceflight Center The Sun was very restless late in June. Starting in the third week of the month, it erupted with numerous flares and flung giant clouds of solar material, called coronal mass ejections, or CMEs, toward Earth. One result: A strong geomagnetic storm that caused the skies to ignite in spectacular displays of the Northern Lights much farther south than usual.

SEE ALSO: Another in a String of Flares Explodes From the Sun, Sending a Cloud of Solar Material Racing Toward Earth

NASA's Solar Dynamics Observatory spacecraft was there to capture all the action, including a gargantuan eruption on June 18th that arched high above the surface and then blew out into space as a substantial CME. You can see the giant arch of glowing plasma in the image above. Several Earths could fit under that arch! Make sure to click on the image to watch a spectacular video by the NASA Goddard Spaceflight Center covering about four hours of the event. Right now, the Sun is comparatively calm, and it is forecast to stay that way for the next several days. (For the latest three-day forecast from the Space Weather Prediction Center, go here.)