Watch as a giant explosion on the Sun blasts material into space, followed by dancing loops of glowing gas

NASA describes the display of coronal loops as particularly unusual 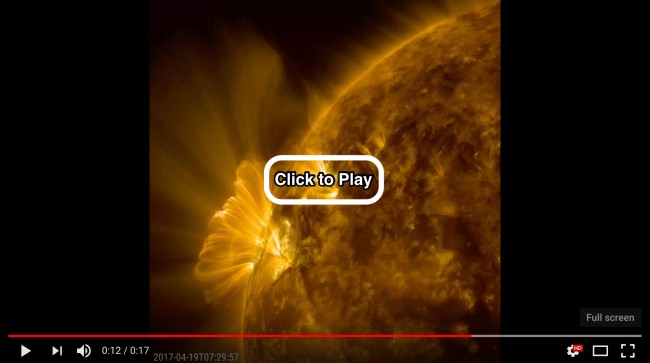 Please click to watch a video showing a coronal mass ejection exploding from the Sun, followed by the formation of coronal loops. (Source: NASA SDO) As NASA's Solar Dynamics Observatory watched on April 19, 2017, a huge explosion of hot, ionized gas and magnetic field blasted outward from the Sun. Immediately following this coronal mass ejection, or CME, gargantuan loops of glowing plasma many times larger than Earth arced high in the Sun's atmosphere. Such bright coronal loops form as charged particles spin along the Sun's magnetic field lines. While such displays occur frequently on the Sun, a description on NASA's SDO website noted that this one was unusual: "We have observed this phenomenon numerous times, but this one was one of the longest and clearest sequences we have seen in years." The action was captured in a combination of two wavelengths of extreme ultraviolet light over a period of about 20 hours.

NASA's SOHO spacecraft captured this view of the coronal mass ejection exploding from the Sun on April 19, 2017. The Sun itself is blacked out so the CME can be visible. (Source: Helioviewer/NASA) CMEs explode outward, typically at speeds of about nearly 700,000 miles per hour, from regions on the Sun where magnetic activity is particularly intense. If a CME impacts the Earth’s magnetic bubbled (called the "magnetosphere"), it can cause a geomagnetic storm that's potentially damaging to satellites, communications networks, power grids and other systems. Beautiful aurora are a more benign result. Coronal loops often follow a CME. The glowing plasma that forms these beautiful features is one of the four normal states of matter. It consists of an electrically charged gas in which some electrons have been stripped away from their atoms.