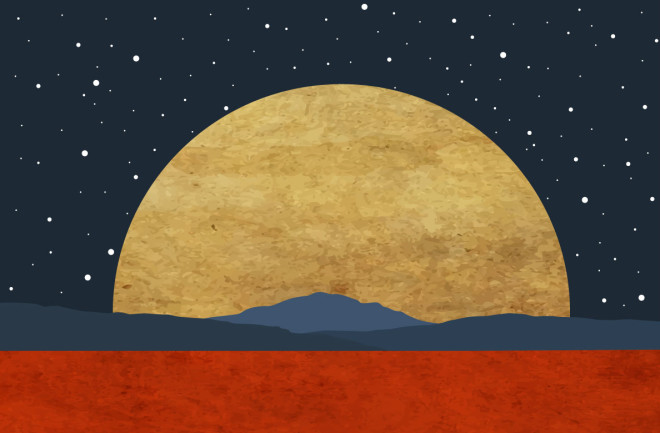 (Credit: Dima Oris/shutterstock) When Igor Ashurbeyli walked onstage to be inaugurated Asgardia’s head of state, it was a few small steps for the Russian scientist and businessman, and one dubious leap for the world’s first “space nation.” The national anthem that preceded him fills the mind with scenes of an epic, pioneering future, and that’s just what Ashurbeyli envisions. Our descendants take up residence in “space arks” with artificial gravity, a fleet of ships defends earthlings from asteroids and other “threats emanating from space.” Humans carry life to moon settlements and venture ever deeper into the universe. That’s the end goal, Ashurbeyli says. But for now, they’re progressing in bite-sized chunks. During his inauguration speech last week, he rattled off a list of accomplishments since he founded Asgardia about a year and a half ago. So far, they’ve recruited over 200,000 citizens from more than 200 countries; established “territory” in the form of a toaster-sized nanosatellite; created a national constitution, flag, coat of arms and even calendar; and elected a parliament, speaker, chief justice and prime minister. “We have thus established all branches of nation,” Ashurbeyli proclaimed, “and now I can therefore declare with confidence that Asgardia, the first space nation of the united humankind, has been born.” Over the next 25 years, he said, they will proceed to flesh out their government, establish a national bank and introduce a national currency. They’ll continue developing their sci-fi technology and prepare for space colonization. When they’re through, the Asgardians will gain acceptance from all Earth’s nations and spark a new era of infinite expansion and bliss. But wait, hold the applause - not so fast, legal experts warn. These claims are enticing and eye-catching. They're also pretty absurd.

If you were to watch Ashurbeyli’s speech with scholars of space and international law, most would point to a hitch at nearly every one of his boasts. These complications stem from the definitions of the four widely accepted elements of statehood: population, territory, government, and interstate relations. Let’s walk through them. Yes, it’s true that about 200,000 people from around the world have received citizenship to Asgardia. But Charles Brower, a professor of international law at Wayne State University, argues this virtual community doesn’t quite meet the criteria. “The people on a blog could get together and do the same thing,” he said. Furthermore, to truly be a state, the population would have to live permanently in a defined territory. For now, the Asgardian constituency is scattered across the globe, and likely won’t fit into a toaster. In some ways it’s reminiscent of Sealand, a group that since the 1970s has claimed statehood from a decommissioned anti-aircraft artillery platform off the coast of England. Unsurprisingly, they've yet to win over the United Nations. Granted, Asgardia has done a better job of attracting citizens and has even elected executive, legislative and judicial officials. But even this leadership may fall short of the classic notions of government. It’s unclear in what sense these leaders could be said to govern, since their citizens remain citizens of other nations that already cover their needs. Asgardia isn’t providing military defense or a police force, they aren’t managing institutions like postal service or social welfare. In other words, they aren’t exercising the normal functions of every other earthbound government. Similarly, it would be difficult for the dispersed nation of Asgardia to enter into the kind of negotiations and treaties that are characteristic of relations between other established states. Above all else, what Asgardia will need is the approval of the world’s countries, and in particular the UN. For that to happen, Brower said, the UN would need an incentive to accept Asgardia as legitimate. “It’s hard to imagine why states and governments would have any interest in setting the bar to statehood so low,” he said. Joanne Gabrynowicz, a professor of space law at the University of Mississippi, noted that there are already many separatist groups unsuccessfully seeking statehood right here on the planet’s surface. So what are the odds the UN will make Asgardia the exception? “I wouldn’t bet a lot of money on it,” Gabrynowicz said. “There’s a long road between saying you’re a nation and actually being a nation.”

An admirable, if unrealistic, idea

Ashurbeyli’s purpose is, of course, grander than Sealand’s. His overarching philosophy calls for a break from the “vicious cycle” of “a perpetual spiral of bloody wars, competitions for territory and resources.” He urges a new “space politics” to replace the geopolitics that have given rise to the most horrific moments in human history. In the endlessness of space, where there is room for everybody, he believes his people can attain a peaceful utopia and immortalize Homo Sapiens. “Isn’t it beautiful?” Ashurbeyli mused. Of course it is. It’s heaven. His nation’s name is adapted from the word the Norse gave to the realm of their gods. It’s no wonder hundreds of thousands of earthlings signed up. The appeal of the Space Kingdom of Asgardia is clear. In a time when many forecast impending doom by nuclear war or climate change, it represents an escape into a pure future. For others it’s truly the final frontier, a ticket to romantic exploration. Most outside the Asgardian community agree it’s a moonshot. It’s unlikely the international community will see enough value in the space nation to consider its recognition, and the logistics of extensive space colonization on Ashurbeyli’s timeline are questionable. Brower noted that existing nations with significant space programs are in a better position to accomplish Asgardia’s goals anyway. But its merits may lie elsewhere. Chris Newman, a professor of space law and policy at Northumbria University, suggested that maybe Asgardia’s importance rests in the fact that it’s inherently thought provoking. “More than anything else,” he said, “it’s probably a bit of a laboratory animal.” Others agree this kind of intellectual curiosity is worthwhile. It could push humanity to think outside the physical boundaries that have been an essential component of the state for millennia, and to experiment with a revolutionary form of governmental framework. The space nation as Ashurbeyli sees it may evade us for now. But perhaps it’s the imaginative kickstart we need to help us forge a brighter tomorrow. “Asgardia may not be a nation,” Newman said. “But what it is, I think, is an idea. It’s a chance to try to learn and explore as a species.”