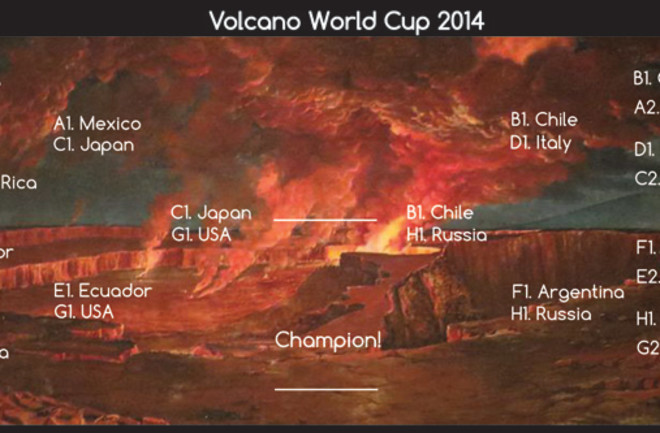 Volcano World Cup 2014 Bracket We've reached the Semifinals of the Volcano World Cup and now it really becomes a battle of the titans. The Quarterfinal matches weren't that close -- except for a spirited battle between Chile and Italy that saw Italy briefly take the lead until a late surge of Chilean votes. Now the final four teams vie for a shot at the Finals and the chance to bring home the Volcano World Cup trophy. Vote now! Voting will be open until 5 pm Eastern time on July 10.Game 1Japan: It seems fitting that Japan's push for the Finals should be lead by the most iconic of Japanese volcanoes, Fuji (below). The nearly-perfect cone of the volcano has been featured in countless paintings, ink drawings, photographs and films as it looms near Tokyo. It has been over 300 years since the last eruption of Fuji (in 1707-8), it can almost lull you into a sense of peace and serenity -- but remember, it is an active volcano. That eruption in 1707-8 was big, on the same scale as the 1980 eruption of Mount St. Helens and over the last 4,000 years, it has produced multiple explosive eruptions of that magnitude. It might not be the most active volcano in Japan today, but it is clearly the team captain.

Japan's Fuji, seen from Fuji-Hakone-Izu National Park. Photo by SteFou! / FlickrUSA: No currently-active volcano has been in eruption longer than Hawaii's Kilauea. The volcano has been erupting lava flows and producing lava lakes for over 30 years straight now and there is no end in sight to the eruption. Most of the lava flows are coming from a vent on the side of the volcano (Pu'u O'o), but small eruptions have occurred up and down the volcano and added to its growing shield. Even today, lava flow fields are very active on Kilauea (as the image below attests) and we've now reached 5 years with a persistent lava lake at the summit caldera of Halema'uma'u. The best thing about this eruption is how it might be the most fan-friendly eruption on the planet, where you can go visit the lava flows (with guidance) or watch them from the comfort of your living room.

A new lava flow breakout from Kilauea's Pu'u O'o vent, seen on June 27, 2014. Photo by USGS/HVO.Game 2Chile: Chile just slipped by Italy in the Quarterfinals, but its path to the title gets no easier. However, you have to remember the shear number of volcanoes in Chile. There are somewhere between 120-140 potentially active volcanoes up and down the country with possibly as many as 500 places that have seen active volcanism in the past million years. It is hard to be more volcanic than that. Back in 2009, Llaima put on quite a show, producing a tall lava fountain that towered over the volcano. This lava fountaining was accompanied by lava flows as well that cascaded down multiple sides of the volcano. Within sight of Llaima is another volcano - Villarricca - that has a persistent lava lake at the summit as well. This density of volcanism is just what to expect when Chile takes the field.

The summit lava fountain and lava flows during the 2009 eruption of Chile's Llaima. Photo by Pato Novoa / FlickrRussia: As much of a case as you can make for Chile, it is hard to get by the constant eruptions from Russia's gaggle of volcanoes on Kamchatka. The peninsula boasts 19 potentially active volcanoes and as I've mentioned before, sometimes up to a half dozen of those 19 are in full eruption at the same time. Two of the most dramatic eruptions over the past century have occurred at Tolbachik, a complex volcano made of multiple volcanoes really - one part is a low, broad shield volcano with a caldera and the other is a composite volcano with steep slopes. The most recent two eruptions from Tolbachik have been decided basaltic, producing vast lava flow fields. The 1975-76 eruption was the largest historic basaltic eruption on Kamchatka (over 2 cubic kilometers) while the 2012-13 eruption (see below) was likely not far behind in terms of lava extrusion. That would be impressive by itself, but when you consider that eruptions like this occur frequently in Kamchatka, finding a place to rival Russia might be impossible.