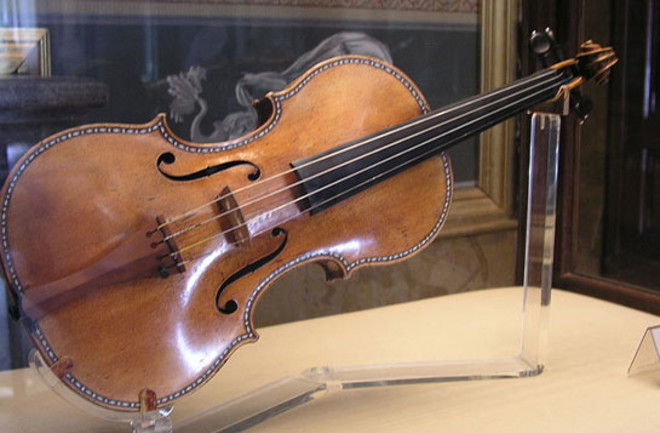 Antique Italian violins, such as those crafted by Antonio Stradivari or Giuseppe Guarneri “del Gesu”, can fetch millions of dollars.  Many violinists truly believe that these instruments are better than newly made violins, and several scientists have tried to work out why. Some suspected at the unusually dense wood, harvested from Alpine spruces that grew during an Ice Age. Others pointed the finger at the varnish, or the chemicals that Stradivari used to treat the wood.

But Claudia Fritz (a scientist who studies instrument acoustics) and Joseph Curtin (a violin-maker) may have discovered the real secret to a Stradivarius’s sound: nothing at all.

The duo asked professional violinists to play new violins, and old ones by Stradivari and Guarneri. They couldn’t tell the difference between the two groups. One of the new violins even emerged as the most commonly preferred instrument.

Ever since the early 19 century, many tests have questioned the alleged superiority of the old Italian violins. Time and again, listeners have failed to distinguish between the sound of the old and new instruments. But critics have been quick to pick holes in these studies. In most cases, the listeners weren’t experts, and the players and researchers knew which violin was which – a flaw that could have biased the results.

What’s more, no one has tested whether violinists themselves can truly pick up the supposedly distinctive sound of a Strad. The common wisdom is that they can, but Fritz and Curtin showed that this isn’t true. “Many people were convinced that as soon as you play an old violin, you can feel that it’s old, it’s been played a lot, and it has a special sound quality,” says Fritz. “People who took part in the experiment said it was the experience of a lifetime when we told them the results. They were fully convinced they could tell the difference, and they couldn’t.”

During the Eighth International Violin Competition of Indianapolis – one of the world’s most important competitions – Fritz and Curtin persuaded six violinists to part with their instruments. Three of the violins were new; one was made a few days before. The other three had illustrious, centuries-long histories. Two were made by Stradivari and the other by Guarneri. One of the Stradivari, denoted “O1”, currently belongs to an institution, and is loaned to only the most gifted players. All three have featured in concerts and recordings, bowed by famous violinists. Their combined value is around 10 million US dollars, a hundred times more than the three new ones.

Curtin’s influence was essential in persuading people to give up such prized, fragile possessions, especially to be played by blindfolded strangers. “Joseph is a well-known person in the community and people trust him,” says Fritz. “That’s why we managed to do the study: the combination of me as the scientist and him as the violin-maker.”

Back in the lab, Fritz and Curtin asked 21 professional volunteers to play the six violins. They had played for anywhere from 15 to 61 years, and some of them were even involved in the competition as contestants and judges. They played the instruments in a dimly lit hotel room chosen for relatively dry acoustics.

The test was a true “double-blind” one, as neither the players nor the people who gave them the violins had any way of knowing which instrument was which. The room was dimly lit. The players were wearing goggles so they couldn’t see properly. The instruments had dabs of perfume on the chinrests that blocked out any distinctive smells. And even though Fritz and Curtin knew which the identities of the six violins, they only passed the instruments to the players via other researchers, who were hidden by screens, wearing their own goggles, and quite literally in the dark.

First, the players were given random pairs of violins. They played each instrument for a minute, and said which they preferred. Unbeknownst to them, each pair contained an old violin and a new one. For the most part, there was nothing to separate the two, and the players preferred the new instrument as often as the old one. There was one exception: O1, the Stradivarius with the most illustrious history, was chosen far less often than any of the three new violins.

Next, Fritz and Curtin gave the recruits a more natural task. They saw all six violins, laid out in random order on a bed. They had 20 minutes to play any violin against any other and to choose the one they’d most like to take home. They also picked the best and worst instruments in terms of four qualities: range of tone colours; projection; playability; and response.

This time, a clear favourite emerged. The players chose one of the new violins (“N2”) as their take-home instrument most often, and it topped the rankings for all four qualities. As before, O1 received the most severe rejections. Overall, just 38 percent of the players (8 out of 21) chose to take an old violin home, and most couldn’t tell if their instrument was old or new. As Fritz and Curtin write, this “stands as a bracing counterexample to conventional wisdom.”

There are some issues with the study. Curtin, being a maker of new violins, has an obvious bias, but the double-blind design should have prevented that from affecting the results. The sample size – six violins and 21 players – is fairly small, but as large as can be expected when dealing with rare and incredibly expensive objects. There might also other variables that could affect the players’ perceptions – perhaps, for example, they might feel differently in rooms with different acoustics.

Fritz expects scepticism. She says, “It might help to change people’s mentality, but quite slowly. It’s a very conservative community. We’ll probably get critics saying we didn’t take this or that into account, but obviously, it was the same for the new violins too.” She adds, “Modern makers should be very happy, and we hope that it’ll help them to promote their violins. It shows that they’re doing a great job and their violins are on a par with the old ones.”

Perhaps the esteem that’s placed on Stradivarius violins is less about the triumph to age-old craftsmanship, and more a testament to our ability to delude ourselves. This ability has come out in other areas. Take wine, another product where certain specimens fetch critical acclaim and exorbitant prices on the basis of superior quality. And yet, study after study has shown that expensive wines taste the same as cheap plonk when you test people under double-blind conditions. The imagined link between price and quality is a delusion but, as Jonah Lehrer skilfully argues, it can be a pleasant one.

The same could be said of violins. The joy of owning and playing a Stradivarius comes not from any objective advantage in its sound, but simply from the knowledge that it is a Stradivarius. Never mind what it sounds like – it’s an elegant and beautifully made instrument that carries status in its name, gravitas in its price tag, and the weight of centuries in its wood.

For this reason, studies like this are useful for busting some myths, and they may boost the credibility of new violins, but they are unlikely to diminish the lust for the old ones. Fritz and Curtin recognise as much. Writing about one of their volunteers, they say, “When asked the making-school of the new instrument he had just chosen to take home, he smiled and said only, “I hope it’s an [old] Italian.”

UPDATE: John Soloninka, one of the 21 violinists who took part in the study, has commented about his experiences below: "It was fascinating. I too, expected to be able to tell the difference, but could not. Claudia sent me my comments about the instruments that I made while I was playing them, and it was hilarious how wrong my impressions were at the time!"