We’re still learning a lot about the sun, including what cool sounds it makes. 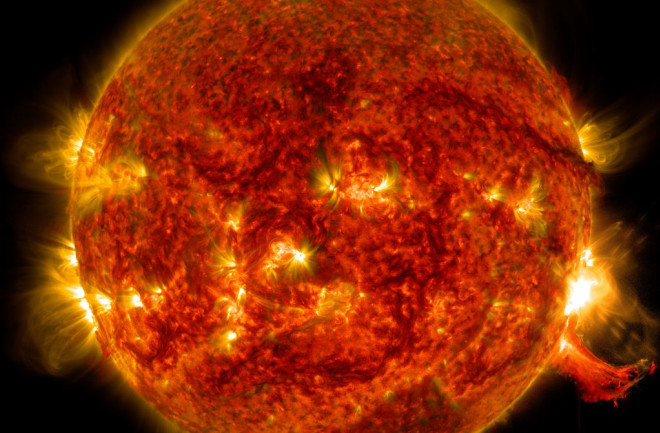 You know, for how often we see the sun, there’s an awful lot we don’t know about it.

I mean, we know it’s powered by nuclear fusion, that it’s 92.96 million miles away, and that it’s about a million times bigger than the Earth by volume. But there’s more to it than that. Like, why is its corona so hot? How does the sun make solar wind? How does it give Superman his powers?

Luckily, NASA is hard at work answering some of these questions.

Mission to Touch the Sun

In August 2018, NASA launched a mission to touch the sun. It’s called the Parker Solar Probe, and it’s designed to withstand super-high temperatures. Over the next few years, it’ll swoop around the sun several more times, getting closer than any spacecraft before it.

And it will actually fly through the sun’s corona, which is the wispy outer layer that’s visible during a solar eclipse. That’s nuts because the corona is incredibly hot — millions of degrees Fahrenheit. Turns out the surface of the sun is only a few thousand degrees.

The probe will also take measurements of the hot, electrically charged plasma that comes off of the sun’s corona and streams through space, called solar wind. These winds are what cause auroras on Earth — and on other planets, too.

One of the biggest things researchers hope to learn is how the sun transports energy into the corona in the first place. How is it so hot? And how does it push the solar wind out at such high speeds? Scientists have suspected that magnetic fields have something to do with it, but they don’t know exactly what.

The probe has already made a few laps around the sun and reported back. So far, Parker’s found out that there are dramatic changes in the vibrations of the magnetic fields coming from the sun, which seem to get weaker as they get farther away. Though the findings aren’t yet conclusive, it’s possible that these magnetic interactions are what’s heating the sun’s corona and accelerating the solar wind.

Sounds of the Sun

The other super rad thing we’ve gotten from the Parker Solar Probe are some sound clips. Let’s listen.

What we’re hearing is the solar wind. That’s the whooshing and whistling noises.

Now, this isn’t literally sound, like we think of it on Earth. There’s no microphone on board the solar probe. Instead, it’s measuring the frequencies and amplitudes of the pressure waves in the solar wind.

And that is kind of like sound because here on Earth, we hear pressure waves as sound. So all the researchers had to do was translate the waves that the probe measured into the types of waves we can hear.

I don’t know, I’m counting it.

So different sounds are produced by different types of particles doing different things, like, if a beam of electrons streams along a magnetic field.

Or, if electrons spin around a magnetic field.

So, anyway, the researchers weren’t just looking for some sweet new space sound effects. They’re going to look into these data some more and see if they can learn about how the hot corona and the solar wind work.

Scientists are stoked about these initial results. They’re really hopeful that more data from the Parker Solar Probe will spill some of the sun’s remaining secrets.

By the way — the sun does make actual sound. We just can’t hear it because space is a vacuum, so the sound waves don’t have a way of getting to us. But if we could hear the constant roar, it’d be pretty loud, even from here. One heliophysicist crunched the numbers and estimates the noise would be around 110 decibels, or about the same volume as speakers at a rock concert.

Anyway, the Parker probe isn’t the only way we’re getting new info about the sun.

Just a few days ago, the European Space Agency and NASA successfully launched a joint Solar Orbiter — a new mission on its way to go check out the sun.

And let’s not forget the good ol’ fashioned telescope.

In fact, the new Daniel K. Inouye Solar Telescope in Hawaii — the biggest solar telescope on Earth — has taken its first video footage of the sun. These new shots are the highest-resolution views of our star yet, showing details on the sun’s surface as small as 18 miles across.

On the sun, hot plasma rises to the surface, cools and sinks back down in a process called convection, like water boiling in a pot. The grainy pattern you see are these cells of plasma, which turn over about every five minutes.

The brightest spots are the hottest, where new plasma has just risen up from below. And the darker spots are where cooler plasma is sinking down. These plasma cells are roughly the size of Texas.

The bubbling motions are important for researchers to study because plasma is electrically charged, so its motions can create magnetic fields. And it’s the sun’s magnetic fields that are responsible for some of its most dynamic behavior, like solar storms, which can mess with satellites and power grids on Earth.

The new telescope can also do more than take pretty pictures. It’s got all sorts of instruments that can measure information about the magnetic forces in the sun’s atmosphere.

With all this new information, scientists are closer than ever to figuring out how, exactly, our sun keeps on shining.

This video is based on reporting by Erika K. Carlson and Nathaniel Scharping.