Our Sun, the Still-mysterious Star That Gives Us Life

When it comes to our local star, science is just warming up. 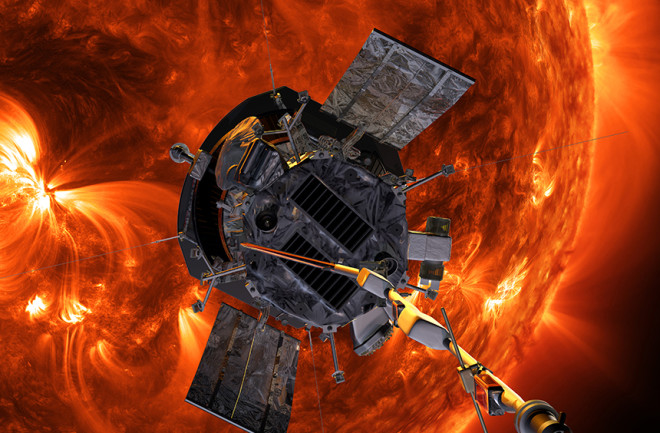 The sun has always loomed large, bringing heat and light and life. In ancient times, it was worshipped as a god; now we revere it as our local blob of luminescent hot plasma — a close-up example of the twinkling stars that come out at night. The sun shines thanks to fusion reactions deep in its core, melding hydrogen atoms into helium and releasing photons in the process. That light then spends tens or hundreds of thousands of years bouncing around before it finally escapes the sun’s surface.

Life on Earth depends on sunshine — but that dependability belies our star’s complexity. The sun’s outermost visible layer, for instance, is roiled by invisible magnetic fields, which break and reconnect over and over, releasing energy every time. And no one knows why its atmosphere-like corona becomes hotter, not cooler, as you move away from the solar surface.

Learning about the sun is something of a Pandora’s box, says NASA heliophysicist Nicola Fox. “We’ll answer these first questions, but we’ll probably answer them with 10 more questions.”

Parts of the Sun

CORONA: The outermost part of the sun’s atmosphere, it's visible during a total solar eclipse, when the moon blots out the rest of the sun’s light. PROMINENCE: A tumultuous loop of plasma — the superhot gas that makes up the sun — that stretches into the corona from the solar surface. Prominences follow the twisted and constantly changing magnetic fields that envelop our star.

SOLAR WIND: The invisible flow of charged particles constantly streaming away from the sun along magnetic field lines.

FLARE: A bright, visible flash that may last minutes or hours; it signals the powerful release of magnetic energy. Flares often occur near sunspots, and they may accompany CMEs.

CORONAL MASS EJECTIONS (CMEs): In the sun’s corona, billions of tons of plasma can accelerate up to supersonic speeds and blast outward along the solar wind. Why that happens remains a major mystery. These events may be accompanied by a flare.

What happens on the sun doesn’t stay on the sun. When blobs of charged particles are burped up into the solar wind, they can strike Earth’s magnetic fields to create auroras, as well as extreme weather events like geomagnetic storms.

The most powerful known space weather storm struck in 1859, and all things electromagnetic were at risk: Telegraphs spewed sparks, shocking operators and setting nearby papers on fire. If an equally strong storm struck today, it could cause widespread damage to satellites, power grids and electronic devices.

First Glimpse of an Unsolved Mystery

In August 2018, NASA launched the Parker Solar Probe, a mission designed to get closer to the sun than ever before. It’s already beaming back surprises. Data from its first orbit, unveiled at a conference in December 2018, showed unexpected patterns in how the sun’s plasma flows — something scientists thought they understood. “You could hear audible gasps in the audience,” says Fox, Parker’s former project scientist. “Now we have to say, 'Why doesn’t it look like we thought it would?' ”

As Parker continues to beam back reports, researchers like Fox hope to better understand how the corona heats up and accelerates the plasma blobs that can cause big trouble on our little planet.

Temperature: At 15 million kelvins, or 27 million degrees Fahrenheit, the sun’s core is its hottest part. But forget about ever seeing it: The human body, along with anything we can build, would vaporize before even reaching the sun’s surface, itself a roasting 6,000 K (10,300 F).

Birth: The sun — along with the rest of the solar system — formed more than 4.5 billion years ago, when a big swirling cloud of gas and dust collapsed under its own gravity.

Death: In 5 billion years or so, the sun will run out of its hydrogen fuel and expand into a type of star called a red giant, likely consuming Earth along the way. Godspeed to any possible descendants!

We’ve been seeing sunspots for thousands of years, though some early scholars dismissed them as the shadows of planets, to preserve the perfection and purity of the sun. The number of spots fluctuates year to year, following a roughly 11-year cycle of highs and lows. Measurements suggest we’re currently approaching the end of a cycle, and drifting into a solar minimum.

Every cycle ends — and begins — with a reverse of the sun’s magnetic orientation: Magnetic north becomes magnetic south, and vice versa. An uptick in sunspots often tells us the field is about to flip.