America’s second satellite stopped communicating with Earth in 1964, but it will stay in orbit for centuries. 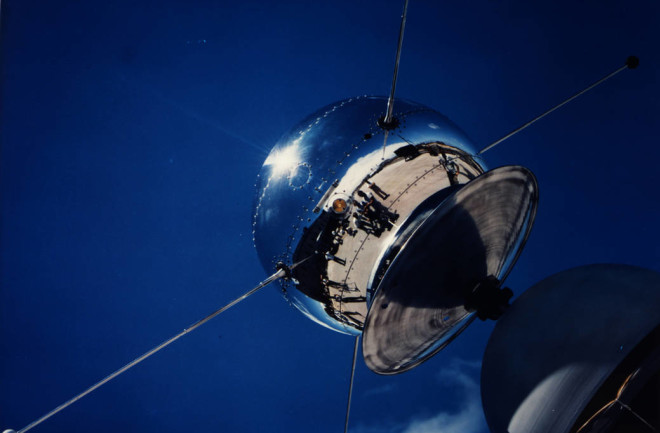 The Vanguard spacecraft, the oldest satellite still in orbit, is seen here in Cape Canaveral, Florida, back in 1958. (Credit: NASA)

Today, there are more than 2,600 active satellites in orbit, as well as thousands of dead satellites that circle the planet as space junk. But plummeting rocket prices and a revolution in small electronics are now fueling a commercial space rush, with companies combining to launch hundreds of additional satellites into orbit every year.

Just one of those companies, SpaceX, has plans to launch tens of thousands more satellites as part of its controversial Starlink constellation, which aims to provide space-based internet to the world. However, each Starlink satellite is expected to last just couple years before powering down and burning up in Earth's atmosphere.

But a lifespan of a few years is nothing compared to Earth’s oldest satellite: Vanguard 1. As America’s second satellite, it was launched into space on March 17, 1958. And though it only blasted off some six months after the Soviet's Sputnik satellite, Vanguard 1 still remains in orbit — more than 60 years later.

This makes Vanguard Earth’s longest-orbiting artificial satellite, as well as the oldest human-made object still in space. And that's not likely to change any time soon. Although Vanguard stopped communicating with Earth in 1964, it will remain in orbit for centuries to come.

A Satellite the Size of a Grapefruit

Part of the key to Vanguard's longevity is that it is truly puny. Vanguard is a metal sphere that weighs just 3 pounds (1.5 kilograms) and stretches 6.5 inches (16.5 centimeters) across — making it smaller than a basketball. Or, as Soviet leader Nikita Khrushchev dubbed it, “the grapefruit satellite.”

Despite its minuscule measurements, Vanguard was groundbreaking. It was the first solar-powered spacecraft, drawing its energy from six matchbox-sized panels. The U.S. Naval Research Laboratory was tasked with building the spacecraft as part of the science program for the International Geophysical Year from 1957 to 1958.

In some ways, Vanguard was also a precursor effort to NASA. A number of Navy researchers who worked on it ended up joining NASA when the space agency was first formed in 1958, creating the core of Goddard Space Flight Center. When the project transferred from the Navy to NASA, the researchers went with it.

These scientists designed Project Vanguard as an experiment to study how the environment of space affects satellites. When it reached orbit, researchers meticulously tracked its flight path. They observed how its trajectory strayed from their predictions, using that information to refine their understanding of the properties of Earth’s upper atmosphere.

But Vanguard was also meant to test the launch abilities of a three-stage launch vehicle, which was (uninspiringly) also named Vanguard. And that’s why it has such a distant, long-term orbit.

The first two satellites successfully launched into orbit — Sputnik 1 and Sputnik 2 — were sent on smaller rockets. That meant they didn't get as far from Earth's surface, causing them to plummet back to Earth within the first year. The third (and America's first) satellite, Explorer 1, stayed aloft a bit longer, returning to Earth after 12 years.

But with Vanguard 1, its high orbit led scientists to suspect it could stay in the void of space for roughly 2,000 years. Eventually though, the researchers learned that space has more drag than they expected, which forced them to revise Vanguard's predicted orbital lifespan to about 240 years.

So, more than a century from now, long after Starlink has been forgotten, future space travelers may be able to take a trip to visit Vanguard, getting an up-close look at humanity’s oldest space-based archaeological site.

Editor's Note: This story has been updated to reflect that Explorer 1 stayed aloft until 1970, though its final transmission to Earth was a few months after its January 1958 launch.