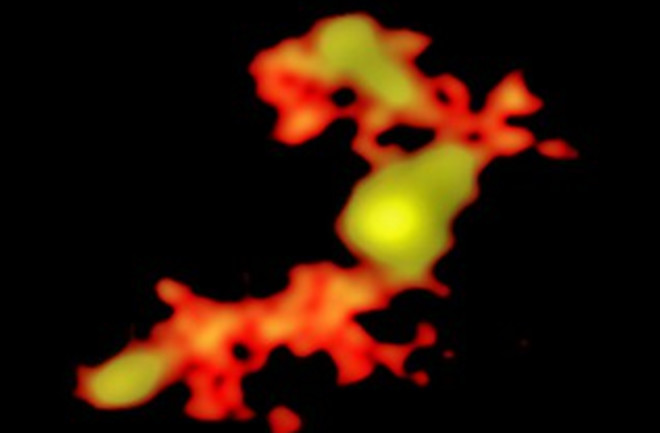 An ALMA image of W2246-0526, the bright, central galaxy, feeding off of its neighbor galaxies through streams of dust and gas. (Credit: T. Diaz-Santos et al.; N. Lira; ALMA (ESO/NAOJ/NRAO)) In the early days of our universe, the gravity of an ultra-bright galaxy pulled streams of dust and gas from nearby galaxies to power its supermassive black hole and associated bright quasar. Now, for the first time ever, researchers have observed this cosmic interaction. When gravitational forces shepherd material like dust and gas into a supermassive black hole at the center of a galaxy, that material grinds together and emits energy that's observed as a quasar. A quasar is the active center of a galaxy where a supermassive black hole shoots out jets of gas. Dusty quasars are a particular flavor of quasars that are also embedded in a blanket of dust that absorbs and re-emits the energy generated by the supermassive black hole. Now, a new imaging analysis of W2246-0526 —the most luminous galaxy discovered to date— shows how, in the early universe, this galaxy's gravity pulled in dust and gas from three other nearby galaxies. The stolen material helped power W2246-0526's quasar and black hole and shrouded it in dust. This analysis could show how luminous galaxies, in general, might feed their supermassive black holes while also obscuring their black holes and quasars with dust. Previously, astronomers have identified similar dusty, powerful quasars but haven't been able to determine how they formed. Now, a team of researchers used the Atacama Large Millimeter/Sub-millimeter Array (ALMA) telescope to study the quasar WISE J224607.57−052635.0 that lies at the heart of the ultra-bright galaxy W2246-0526. They found, by observing the quasar with ALMA and studying dust emissions, that the quasar in the luminous galaxy was tethered to three smaller galaxies by streams of gas and dust. "What we detected for the first time was basically streams of dust connecting the satellite galaxies to the central galaxy that hosts the quasar," lead researcher Tanio Diaz Santos said, adding that this is the first time such connecting streams of material have been observed. Essentially, Santos said, the team found that the bright, central galaxy's gravitational forces ripped material (gas and dust) from its neighboring galaxies. And, after digging a little deeper, the team found that the merger of these small companion galaxies provided the dust that obscures the quasar, as well as the material that fell into the supermassive black hole in the first place. As Santos explained, this central galaxy didn't just steal a little bit of dust — it siphoned off a significant amount of material from these neighboring galaxies. "If you make some calculations about the amount of material that is being pulled from these neighbors, that amount of material is enough, if you assume that its gonna fall into the central galaxy, that the accretion rate — the rate at which the material is falling into the central galaxy — it's enough to sustain the star formation in the central galaxy as well as the feeding of the supermassive black hole for at least a few hundred million years," Santos said. This work is published in the 16 November 2018 issue of Science.