Turrialba in Costa Rica Has Largest Eruption Since 1866 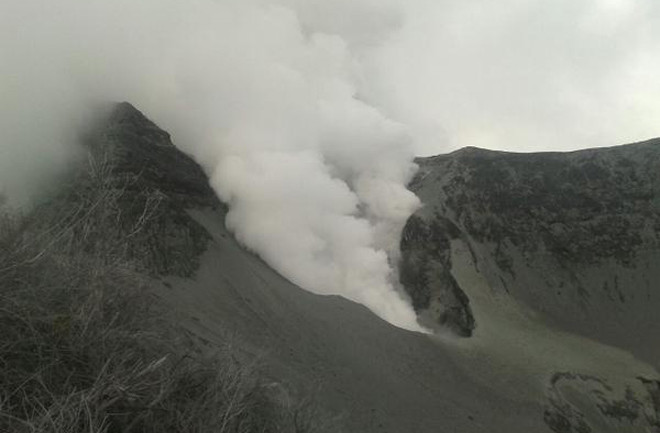 The crater of Turrialba seen on November 1, 2014. The volcano produced its largest eruption since 1866 over the weekend.

RSN Costa Rica Turrialba in Costa Rica has been rumbling for the past few years, producing the occasional small explosions but starting yesterday and today, it looks like the real show has begun. The volcano had its largest eruption in almost 150 years on Saturday, with an ash plume reaching at least 5.8 km (19,000 feet) according to VAAC reports. OVSICORI geologists say that magma has reached the surface at Turrialba, although there is likely not a large volume that have been erupted so far. Recent shots of the vent show a strongly steaming crater with dark grey ash mantling the surrounding area. La Nación has some impressive shots of the plume from the last few days activity, along with timelapse video of the plume. Ash has fallen as far away as San Jose, 35 km away. The area around Turrialba is currently on a Yellow alert status and some small evacuations have begun including 400 cattle grazing near the volcano. The eruption of 1866 was a VEI 3 event that saw activity across multiple vents at the volcano. After that eruption, Turrialba was quiet until 2007 when this unrest began. Most of the past eruptions at Turrialba has been basalt to basaltic andesite, so a very large explosive eruption would be surprising. However, violent explosion eruptions have occurred at similar volcanoes in Costa Rica, including Arenal in 1968. If you're in Costa Rica, OVSICORI is looking for reports on ash fall from the eruption.