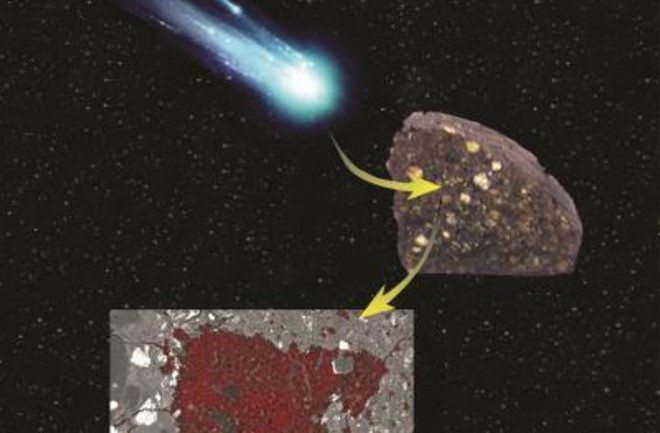 The cometary fragment was preserved inside an asteroid and transported to Earth in a meteorite. (Credit: Larry Nittler/NASA) Our solar system is a whopping 4.5 billion years old. And those earliest days were some of the most interesting for astronomers. That's when the planets formed, building from dust grains into the whole worlds that now populate our space neighborhood. But most of this material has been drastically changed since its early days – incorporated into planets, or baked by the sun and weathered by time. However, if we could find material that hasn’t been changed in some way it would help astronomers understand what the early solar system looked like. And sometimes, just rarely, such prizes rain from the heavens.

In 2002, researchers with the U.S. Antarctic Search for Meteorites program were exploring Antarctica's LaPaz Icefield when they came across an unusual space rock. The meteorite itself was valuable, belonging to a class called carbonaceous chondrites, prized for being ancient and relatively unchanged throughout the solar system’s history. Meteorites are pieces of former asteroids that broke up and eventually fell through Earth’s atmosphere and survived as rocky detritus. They can range widely, from rocky to metallic, representing the different areas and eons of the solar system where they originated. But this particular meteorite was also hiding something else special. Trapped inside, researchers found a carbon-rich inclusion – only a few thousandths of an inch across – that they say more closely resembles a comet. Comets form farther out than asteroids, near the solar system’s frozen edge. These days, that region is the zone of the Kuiper Belt, of comets and icy worlds like Pluto and Ultima Thule. The researchers think that this fragment of comet was being hurtled into the solar system toward the sun when it glommed onto the growing asteroid. Eventually, that asteroid broke up, and the piece in question made its way through Earth’s atmosphere to the ground, where astronomers happened across it. They published their findings April 15 in Nature Astronomy. “Because this sample of cometary building block material was swallowed by an asteroid and preserved inside this meteorite, it was protected from the ravages of entering Earth’s atmosphere,” Larry Nittler, the paper’s lead author, explained in a press release. “It gave us a peek at material that would not have survived to reach our planet’s surface on its own, helping us to understand the early solar system’s chemistry.”