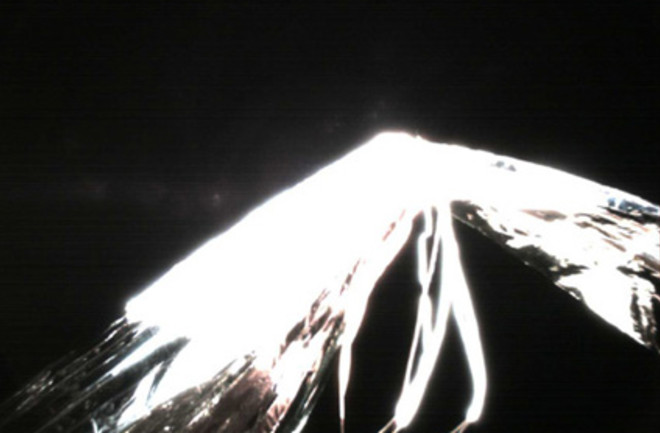 South Korea's attempt to jump into the space race met with disaster today. A little more than two minutes after takeoff today, the nation's Naro rocket exploded. It had been carrying a satellite, and South Korea was vying to become the tenth country to put a satellite in orbit with rockets assembled at home.

South Korea has invested more than 500 billion won (400 million dollars) and much national pride in the 140-ton Naro-1. The liquid-fuelled first stage of the rocket was made in Russia, while the second stage was built domestically, as was the satellite [AFP].

into space that included its solar sail project, called Ikaros. Today it unfurled the sail, seen above in the blinding light of the sun.

After separating from Akatsuki [a separate probe going on to Venus], Ikaros began unfolding four panels that, when fully unfurled, should look like a square kite measuring 66 feet (20 meters) along its diagonal. Pictures sent back by a camera mounted on the spacecraft's hub show the extension of four booms holding the panels, plus the unfurling of sail material. This is the "primary deployment" of the sail. During the secondary stage of deployment, the sail is stretched out to its full extent [MSNBC].

The sail works in two ways, as we noted in previous coverage

: It can ride the physical pressure of sunlight as a sailboat rides the wind, or it can use photovoltaic cells to produce solar electricity that powers thrusters. And another plucky spacecraft from Japan is almost home. When we last saw

the damaged and travel-weary Hayabusa, which attempted to gather samples from the surface of an asteroid, it was limping home under the power of a single remaining engine and some JAXA scientists warned that it might not make it. Now things look brighter, and it could arrive back on its home planet on Sunday.

When Hayabusa (“falcon” in Japanese) reaches an altitude of 190,000 feet, its heat shield will reach temperatures of more than 5,000 degrees Fahrenheit, while the gas surrounding the capsule will reach 13,000 degrees Fahrenheit -- hotter than the surface of the sun, NASA says. It is planned to fall over a large unpopulated area of Australia called the Woomera Prohibited Area [Popular Science].

, on the Hayabusa mission 80beats: Japan's Damaged Asteroid Probe Could Limp Back to Earth in June