It's called Wafercraft, and it's just survived its first test flight. 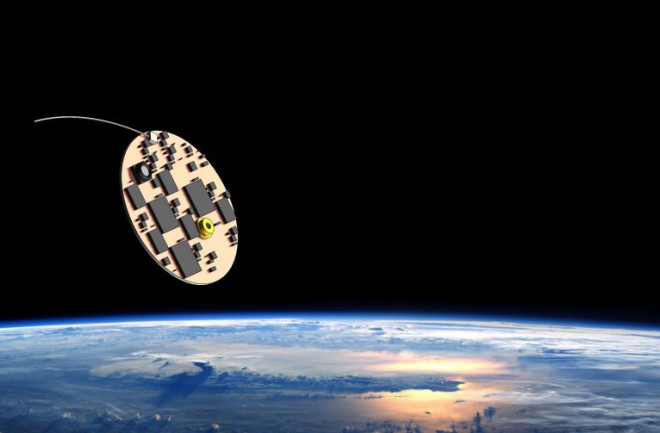 A new spacecraft planned for interstellar travel weighs no more than a stick of gum. (Credit: U.C. Santa Barbara)

The first human-made spacecraft to reach another star system might fit in the palm of your hand. That’s the design engineers from the University of California, Santa Barbara are working on. The tiny craft, which weighs about as much same as a stick of gum, had its first test flight in April, where it soared more than 100,000 feet in the air. Its creators hope its successor will one day fly in space, perhaps even beyond the solar system to neighboring stars like Alpha Centauri.

The tiny ship is being built by scientists at UC Santa Barbara. But its funding comes from aspirations both public ⁠— in the form of multiple NASA grants — and private, through Israeli-Russian billionaire Yuri Milner's Breakthrough Foundation, which seeks explicitly to develop interstellar travel capabilities based on lightweight, light-driven spacecraft — exactly like the wafercraft.

Using traditional chemical rockets, it would take 100,000 years to reach the closest star system, Alpha Centauri. But there’s another option: using Earth-based lasers to push a lightweight craft up to 20 percent the speed of light, which cuts the travel time to Alpha Centauri to only 20 years. And though the spacecraft is tiny, it could still obtain images and other data and relay information back to Earth.

In fact, much of the necessary equipment can be purchased off the shelf, thanks to a whole industry’s worth of innovation making technology smaller and smaller over the years. The test flight included some 4,000 images of Earth, and scientists imagine one day — perhaps within the next generation — sending back images of the Alpha Centauri system instead, complete with the planet scientists think resides in the system.

The Santa Barbara group is planning a suborbital flight for the wafercraft as soon as next year. In the meantime, there’s a lot of work left to do: the laser systems that would propel the craft to interstellar speeds don’t yet exist, and the current version of the craft isn’t likely to survive the harsh conditions of space: cold, filled with deadly radiation and highly charged particles — the downside to using standard equipment designed more for smart phones and watches than space travel.

But they're not the only ones working on such technologies, with the eventual goal of propelling tiny spacecraft to superfast speeds toward neighboring star systems. In 2017, Starshot succeeded in sending six similarly tiny micro-craft into low-Earth orbit onboard a rocket — a higher flight achievement, but one accomplished with less technology on board each tiny spacecraft.

"This experiment, the ones highlighted last year and a large number planned for the next few years are each designed to test an aspect of the technology," Pete Worden, the Executive Director of Breakthrough Starshot, told Discover in an email, calling each of the experiments "mutually supportive."

In the shorter term, a simpler version of the Starshot technology could explore more local space near Mars or the asteroid belt, traveling faster and cheaper than standard exploratory missions. And in the long term, this craft or one like it just might send back our first close-up images of another star system.