Enceladus’s unusual features could help scientists search for evidence of life outside Earth. 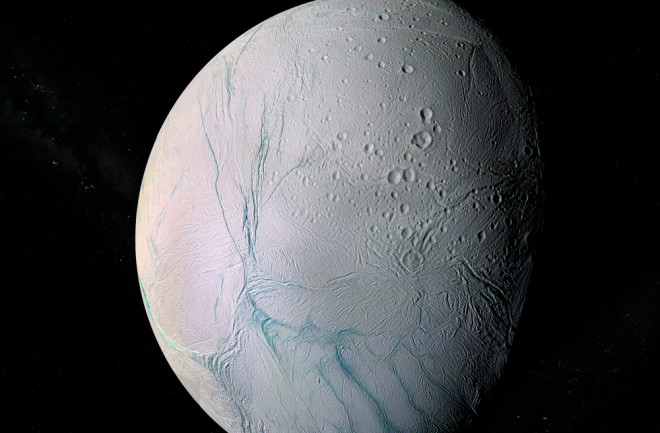 Enceladus, Saturn’s sixth largest moon, is awash with liquid water beneath its icy shell. At the moon’s south pole, the subsurface ocean erupts from one hundred geysers located along four parallel fractures known as ‘tiger stripes.’ The towering jets of ice particles form a plume that snows back down to the surface. Some of the ice even escapes the moon’s gravity and forms Saturn’s E-ring.

Icy moons that have (or are thought to have) subsurface oceans are common in the outer solar system. For example, Jupiter has several of them. These form when gravity from the planet they orbit stretches and squeezes their interior.

Scientists think that these tidal stresses generate enough heat to sustain the liquid water. Tidal stresses can crack the ice shell, but it may be difficult for these fractures to travel all the way through. Enceladus’ tiger stripes are unusual because they extend down to the ocean — and they present an enticing opportunity to search for evidence of life outside Earth.

These famous features are surrounded by 300-meter-high margins that form a valley-like trough up to several kilometers wide at the moon’s surface.

To understand exactly how the tiger stripes formed, researchers model ice shell fractures based on various thicknesses. “Our models show that tidal stresses can fracture the ice shell all the way through, but indirectly limit how thick the ice can be,” says Catherine Walker, a glaciologist from the Woods Hole Oceanographic Institution and lead author of a recent study published in The Planetary Science Journal.

This new research shows that fractures originating at the surface are unlikely to reach the subsurface ocean, even for thinner ice depths. But fractures that begin at the base of the ice shell have a better chance of piercing the surface, especially if they connect with cracks that originate from the top of the ice shell.

“The ocean is under pressure, so water is forced into tiny cracks at the base of the ice shell, which widens and propagates the cracks all the way up to the surface,” says Carolyn Porco, a planetary scientist and visiting scholar at the University of California, Berkeley, and former leader of the Cassini Imaging Team, who suggested this possibility with colleagues in 2014.

The recent study also found that it’s more difficult to form fractures through the entire ice shell than previously thought. Existing fractures reduce the overall amount of stress, and when this is accounted for, new ones don’t propagate as deep or as high, says Walker. “The exact ice shell thicknesses are not known — but it could just be that Enceladus’ ice shell is thinner than we think at the south pole.”

Over a decade ago, the Cassini spacecraft flew through the plume and detected a composition of mostly water, but also salts and organic molecules that hinted at the subsurface ocean.

The spacecraft detected tiny grains of silica, too, which suggests the presence of  hydrothermal vents. Temperatures may reach close to 212 degrees Fahrenheit within these vents, which would allow organisms to survive without sunlight, says Morgan Cable, a chemist who heads NASA’s Astrobiology and Oceans Worlds Group.

Like hydrothermal vents on Earth, those on Enceladus sit on the seafloor. There, heat from the moon’s rocky interior may erupt hot mineral-rich water in chimney-like ocean currents — and organisms could take advantage of the different concentrations of dissolved minerals in these streams. “We are conservative in our estimate of life due to the limited energy budget, but you could certainly have multicellular organisms such as crabs,” Cable says.

All in all, Enceladus’ tiger stripes offer a unique opportunity to collect and analyze fresh material from a subsurface ocean without the need to dig or drill. A future mission would include repeat fly-throughs of the plume, and a possible landing on the south polar terrain to sample freshly falling material that erupts from the geysers.

Touching down on Enceladus would enable the most comprehensive search for evidence of life and allow for easier collection of materials, including repeat and varied measurements to increase scientists’ confidence levels in any discoveries, Porco explains.

A landing could also offer detailed insights into Enceladus’ geophysical workings and help resolve open questions; for example, the ice shell thickness and the width of the fractures.

But of all the burning questions, discovering whether life exists outside of Earth is the most alluring.

“It's only in the outer reaches of our solar system that we could be assured any life found there would represent a genesis of life that is independent of life on Earth,” Porco says. “And whether or not life has arisen independently elsewhere is the most beguiling question that we could hope to answer in exploring the solar system.”