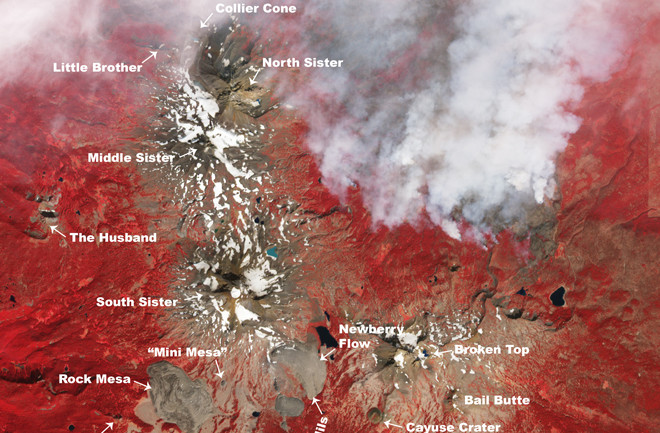 A September 19, 2012 ASTER image of the Three Sisters region in Oregon. On the east side is a prominent wildfire in the Deschutes National Forest. Image: NASA Earth Observatory. I might be biased thanks to the fact I did my Ph.D. at Oregon State, but the central Oregon Cascades are one of my favorite places on the planet. Not only are they incredibly picturesque, but they also host a multitude of volcanic features. The other day, the NASA Earth Observatory posted a new image of the central Oregon Cascades around the Three Sisters, mostly to focus on the wildfire to the east of the Sisters and the glacial bodies that are found on some of the volcanic edifices. However, what I notice when you look at a satellite image of this area is how much volcanic activity is recorded in the landscape. I labeled as many volcanic features as I could on a swath of the larger image - what I might consider a minimum assessment of the volcanic features. Some are old - that is, formed before the last glacial maximum. You can tell features like Broken Top and the Husband have been heavily weathered by glacial action. However, some features have to be younger than the last glaciation (so, less than 10,000 years old) as they remain crisp - many of the small craters and buttes in the image. The main Holocene (or Pleistocene) volcanoes in the image are South Sister, Middle Sister, North Sister (the Three Sisters) and Bachelor. I spent some time working in/around North Sister helping Mariek Schmidt (other Oregon State petrologist) on her work at North Sister. However, there are a number of young volcanic features visible that aren't classic composite volcanoes. Belknap Crater to the north, partially lost in the smoke and clouds, is a lava field that is only ~1700 years old. The domes on the side of South Sister - Rock Mesa, Mini Mesa (well, the name I use for it) and the Devil's Hills (including the big Newberry Flow) are only a few thousands years old. You can compare this image with the geologic map that covers a lot of the region by Sherrod and others (2004) and see all the many basalt lava flows and cinder cones that pockmark the area - a unique feature for the central Oregon Cascades compared to other continental arcs. The Three Sisters region is one of those hidden gems of the Pacific Northwest - sure, everything thinks of St. Helens, the Columbia River Gorge or Crater Lake. Those are all stunning places - but these central Oregon peaks rival almost anything this country has to offer.