Scientists are relieved to rule out a mysterious animal with no anus as a member of our own family tree. 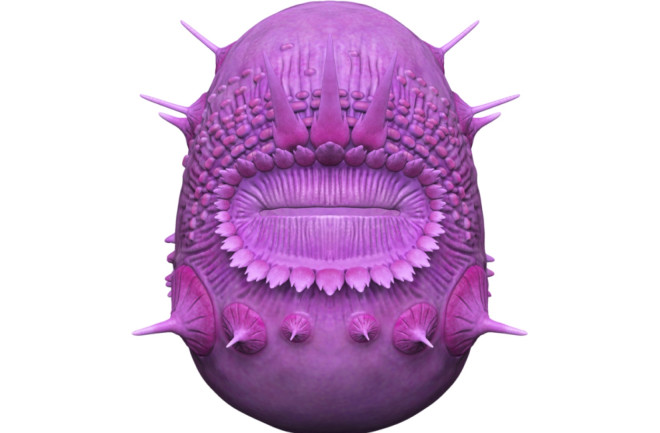 To put it simply, Saccorhytus was a small, spiny and wrinkled sack, with a massive mouth and no anus. This strange animal, which wriggled through the seabed approximately 540 million years ago, looked like nothing you’ve ever seen, and thankfully for all of our peace of mind, a team of researchers recently concluded that the creature came from another family tree, completely separate from our own.

This conclusion, published in Nature, provides much more than a feeling of relief about our origins: It also improves our knowledge about the transformation and progress of life on our planet over time.

It’s All About the Spines

"Saccorhytus was a curious beast, with a mouth but no anus, and rings of complex spines around its mouth," Yunhuan Liu, a paleobiologist at Chang’an University in Xi’an, China, says in a press release. But, despite these obviously odd traits, past analyses propose that Saccorhytus was actually one of our oldest ancestors. The support for this idea stemmed from what looked like little pits around the millimeter-sized animal’s mouth, which were understood as the pores of gills — a common attribute amongst the deuterostomes from which our own ancestors developed.

Now, fossil specimens from China about 500 million years ago have challenged this idea. "Some of the fossils are so perfectly preserved that they look almost alive," Liu says in a press release. This pristine level of preservation shows that the structures that once looked like pits were actually the bases of spines that broke away in the process of fossilization, suggesting that Saccorhytus wasn’t a deuterostome but something else entirely.

To solidify this conclusion, Liu and a team of other scientists investigated the internal and external structures of Saccorhytus fossils. After taking X-ray images of the animals at an array of angles, they developed a detailed digital model of the organism.

The model made clear that the pit-like structures surrounding the animal’s mouth were stopped by another body structure, which would’ve ultimately poked through the pits to create the creature’s spines. "We believe these would have helped Saccorhytus capture and process its prey," Huaqiao Zhang, a paleobiologist at the Nanjing Institute of Geology and Palaeontology and a member of the team, says in a press release.

Ultimately, the team found that Saccorhytus is one of the ecdysozoans, a group of animals that includes arthropods. "We considered lots of alternative groups that Saccorhytus might be related to," says Philip Donoghue, a paleobiologist at the University of Bristol and another member of the team, in a press release. "To resolve the problem our computational analysis compared the anatomy of Saccorhytus with all other living groups of animals, concluding a relationship with the arthropods and their kin, the group to which insects, crabs and roundworms belong."

Oddly enough, the team says that Saccorhytus’s absent anus turned out to be one of the most important facets of their identification. For scientists, the presence or absence of an anus in animals over time is key to understanding the development of different body plans, and Saccorhytus’s identification as an ecdysozoan, therefore, means moving the disappearance of an anus after its initial development from the deuterostomes to the ecdysozoans.

"This is a really unexpected result because the arthropod group have a through-gut, extending from mouth to anus. Saccorhytus’s membership of the group indicates that it has regressed in evolutionary terms, dispensing with the anus its ancestors would have inherited," Shuhai Xiao, a paleobiologist at Virginia Tech and another member of the team, says in a press release. "We still don’t know the precise position of Saccorhytus within the tree of life, but it may reflect the ancestral condition from which all members of this diverse group evolved."