This is What NASA Learned When Cassini Dove Into Saturn 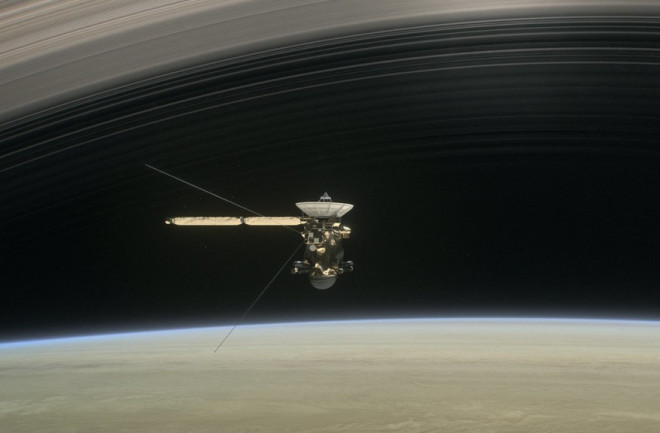 Over its nearly 20 year mission, NASA’s Cassini spacecraft redefined our understanding of Saturn. And while Cassini sent its final transmissions to Earth as it dove into the ringed planet last September, scientists have just published more than half a dozen papers using data collected during its “Grand Finale.” The studies, published in both Science and the Geophysical Research Letters help refine our knowledge of the planet and its rings and how they evolved.

Planetary scientist Hunter Waite of the Southwest Research Institute and his colleagues, for instance, have uncovered how water ice rains from Saturn’s rings into its atmosphere at a whopping 22,046 lbs (10,000 kg) per second. And other materials fall from the rings, too. “Most everything we saw was unexpected,” Waite said about the material falling into Saturn’s atmosphere. “All the things besides water were not expected, so methane, carbon monoxide, molecular nitrogen,” and more were a bit of a surprise. The team also didn’t expect to see so much material falling. “We expected to see a little bit of hydrogen and helium which would come from the atmosphere itself and perhaps a little bit of water vapor … what we saw was much more complex,” Waite said.

These results, are joined by other articles, including one from researcher Hsiang-Wen Hsu and colleagues. The team identified the composition of dust particles that fall from Saturn’s rings toward the planet.

Like Waite’s team, these researchers knew water ice makes up more than 95 percent of Saturn’s rings. But the remaining content was more mysterious, until now. Hsu’s team looked at the ice grains and found that there’s significant amounts of silicate, too.

In a different paper, researcher Donald Mitchell and colleagues also study Saturn’s falling dust grains, though they focused on the physics that make them fall in the first place.

Not all of these papers focus on the rings, however. In one article, researcher Michele Dougherty and colleagues used data from Cassini’s final transmissions to study the planet’s magnetic field. They identified small-scale magnetic structures that suggest a complex, dynamic process inside of Saturn.

And in yet another Paper, authors Elias Russos and his team detail their discovery of a new radiation belt within Saturn’s rings. Additionally, researcher Laurent Lamy and colleagues took measurements as Cassini traveled through areas of the planet’s magnetosphere that generate planetary auroral radio emissions. These emissions are generated in all known magnetized planets.