Intense quarantine, disinfection and inspection protocols are designed to keep astronauts from getting sick in orbit. 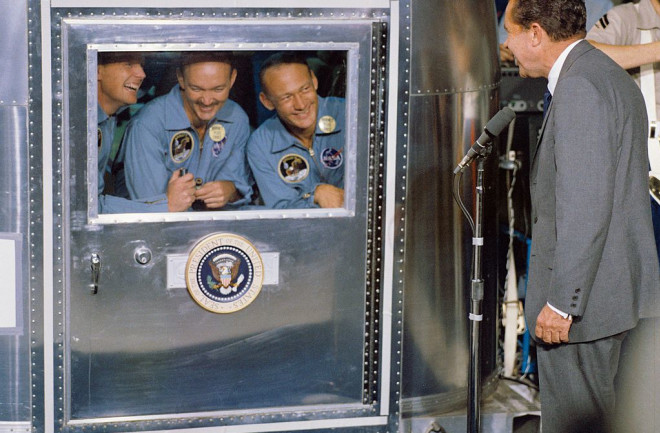 President Richard Nixon visits the Apollo 11 astronauts in quarantine after they returned from the moon in 1969. (Credit: NASA)

Three astronauts are scheduled to launch to the International Space Station (ISS) on April 9. They won’t return to our world for six months. Instead, they’ll watch from the safety of outer space as a pandemic plays out some 250 miles beneath their feet.

Escaping Earth for six months might sound like a dream to most of humanity right now, but these spacefarers must be vigilant to avoid bringing COVID-19 aboard the ISS with them. The odds of that happening are low, but the consequences of an outbreak in orbit could have dire consequences. Medical supplies are limited on the ISS, and an emergency trip home could be both risky and tricky. So to plan for the worst, American and Russian space agencies have stepped up their preventive measures ahead of the launch of astronaut Chris Cassidy and cosmonauts Anatoly Ivanishin and Ivan Vagner.

These three astronauts are not the only ones scheduled for an upcoming launch, either. NASA is moving ahead with another important crew mission as early as May. Two more astronauts, Doug Hurley and Robert Behnken, will fly to the ISS aboard SpaceX’s Crew Dragon capsule. If all goes well, they’ll be the first humans to ride a private spacecraft into orbit. According to a report by CBS News, Hurley and Behnken are also already aggressively trying to limit their exposure to coronavirus.

Sending five humans into orbit is challenging enough under normal circumstances. But it’s harder still during a pandemic. Coronavirus concerns have already had an impact on spaceflight and space science. Several employees at NASA facilities have tested positive for COVID-19. As a result, the space agency has stepped up its response, implementing additional cleaning and social distancing measures, as well as requiring many employees to work from home.

All of this has the space agency keeping an extra close eye on its astronauts.

To stop diseases — including COVID-19 — from spreading in space, NASA and its Russian counterpart, Roscosmos, keep astronauts in quarantine for weeks before a flight. They will also complete a detailed inspection and disinfection of cargo bags.

This quarantine process isn’t new, so astronauts are accustomed to such precautions. A string of space colds on early Apollo missions pushed NASA to start isolating its astronauts before launch more than half a century ago. Neil Armstrong, Buzz Aldrin and Michael Collins even lived in their Mobile Quarantine Facility — a converted Airstream trailer — for weeks after Apollo 11 returned from the moon. However, this quarantine wasn’t as much about protecting astronauts as it was about NASA’s desire to avoid bringing uninvited lunar microorganisms back to Earth. (The Soviet Union also kept its Mir space station cosmonauts in quarantine ahead of launches.)

Those early traditions carried over to the ISS, and they still help keep astronauts from getting sick in space today.

“The ISS Program has always had requirements in place to address preventing any disease-causing agent from being transferred to the ISS and thus potentially to the flight crew,” says NASA ISS spokesperson Dan Huot. “The processes in place have been very effective in this regard.”

And, this time, both the American and Russian space agencies are taking the quarantine even more seriously than usual. Astronauts are usually put into a two-week quarantine before their flightat the launch site in Kazakhstan; but, traditionally, they break it to place flowers at the grave of Yuri Gagarin, the first human to fly to space. That tradition — and all other off-site visits — have been called off, according to reporting by The Guardian. The space agencies have also extended the quarantine period, with NASA sequestering the astronauts for an additional two weeks before they even travel to Kazakhstan.

Beyond keeping astronauts in quarantine longer, NASA and Roscosmos are also taking other steps to reduce the number of potentially harmful microorganisms reaching the ISS next month. The technical support staff will wear protective gear and gloves as they handle cargo and help prepare the crew and capsule for launch from the Baikonur Cosmodrome in southern Kazakhstan. And the staff are even being kept in quarantine themselves, something typically not done. NASA says the preventive measures have been reviewed and approved by the space agency’s doctors, and they’re being “stringently followed” by the team in charge of implementing them.

The Apollo 11 crew in quarantine after their return trip from the moon in 1969. (Credit: NASA)

Getting Sick in Space

Through decades of research, NASA has shown that living in space weakens the immune system, damages DNA, thickens artery walls and alters astronauts’ gut microbiomes. Some studies also suggest more than half of astronauts also get “space sickness” not long after arriving in orbit. This temporary condition can cause fever, chills, headaches, nausea, fatigue and, in severe cases, vomiting. Those symptoms are similar to mild cases of COVID-19, which could make diagnoses tricky if the astronauts don’t bring up test kits.

And while NASA now takes strict precautions, viruses have made it to space in the past, providing a taste of what an illness might be like on station.

During the Apollo 7 mission in 1968, the first crewed mission of the moon-landing program, astronaut Wally Schirra came down with a cold less than a day into the 11-day flight. (Many common colds are actually also coronaviruses.) He soon passed the illness to the rest of the crew.

“We do not have the equipment out; we have not had an opportunity to follow setting; we have not eaten at this point,” Schirra said. “At this point, I have a cold. I refuse to foul up our timelines this way.” Later, they refused to wear their helmets during reentry. The crew never flew again. And the experience — plus other instances of space sickness during the Apollo program — pushed NASA to implement preflight quarantines.

How to Treat COVID-19 on the ISS

If Schirra suffered that much due to the common cold in space, getting COVID-19 in orbit could be a far worse experience. Thankfully, the ISS is already equipped to deal with many medical emergencies.

In January, NASA announced that an unidentified astronaut had been successfully treated for a blood clot in their neck — also known as deep vein thrombosis — at some undisclosed point in the past. Doctors on the ground prescribed the person injections of a blood thinner already in the ISS medicine stores until another prescription could be launched more than a month later. The astronaut talked with doctors on the ground regularly and took ultrasounds of their own neck. The treatment worked. The astronaut was able to cure themself in space and didn’t need additional therapy upon returning from their six-month mission.

If NASA does have a similar telemedicine plan in place to treat astronaut’s diagnosed with COVID-19, they’re not making it public. In an email, a spokesperson for the space agency “respectfully declined” to discuss the matter. However, NASA’s own astronauts have speculated they might simply have to ride out the illness.

“There would be a lot of meetings, I can tell you that, to try to assess what the risk was and how we would go forward,” Behnken, the future SpaceX Crew Dragon astronaut, told CBS News. “Could you kind of work through it from a quarantine perspective, make sure the space station crew was taken care of and whether or not we could get over whatever the sickness was and kind of move on from there?"

And while the ISS has limited medical supplies compared with a hospital, the astronauts would have better equipment to ride out the illness than anyone on Earth would have at home. We know this because a list of the contents of the ISS medicine cabinet was acquired in 2016 through a Freedom of Information Act request filed by the group Government Attic.

For starters, the ISS packs many common over-the-counter drugs that might be useful for treating a mild case of COVID-19 at home, from acetaminophen to ibuprofen. (Be sure to check the Centers for Disease Control and Prevention website for up-to-date recommendations about what to do if you are sick.)

But it also has more complex equipment, including blood oximeters to track how well astronauts are breathing. And, if things get really bad and a space-based patient can’t immediately come home, there’s equipment to intubate them to help get more oxygen in their blood. Of course, nobody wants to be the first person ever intubated in space; not to mention, it would be extremely difficult to isolate the other astronaut caretakers onboard.

That’s why NASA is taking the proactive approach, undertaking preventive measures to simply avoid bringing coronavirus to the space station in the first place.