A successful test of the abort system means the spaceflight company is on the verge of sending humans into space. 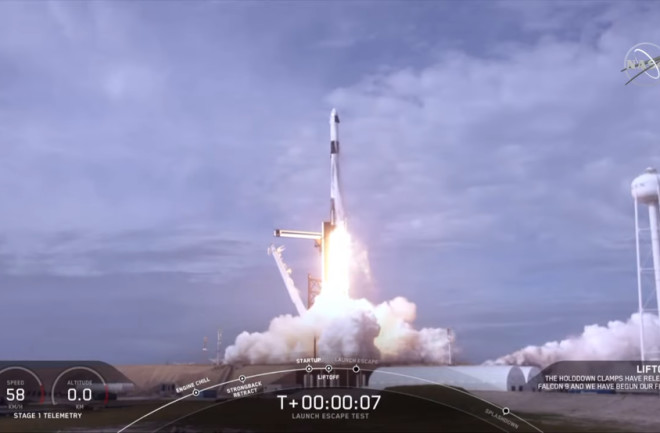 The in-flight abort test was a demonstration of the launch escape system on the Crew Dragon spacecraft. The system is meant to provide astronauts a quick escape from the rocket should something go wrong.

The capsule was uncrewed during the test.

“As far as we can tell thus far, it’s a picture-perfect mission,” said Musk in a NASA press release. “It went as well as one can possibly expect.”

The test was initially scheduled for Saturday, but after unfavorable weather was postponed until Sunday.

In a post-launch press conference, Musk said crewed missions could begin as soon as this spring. This could be a boon to NASA, a potential SpaceX customer, as it currently pays billions to the Russian Space Agency for rides to the International Space Station (ISS). SpaceX calculates it will only cost NASA about $55 million per seat aboard their rocket.

Before the test, SpaceX astronauts Bob Behnken and Doug Hurley performed a full dress rehearsal. The astronauts suited up and the launchpad practiced its full sequence of operations as though for a real launch. The data from the pre-launch sequence and the test itself will be reviewed by NASA and used during the process of certifying the company to take humans to space.

With the test's completion, SpaceX could be the first private aerospace company to send a crewed mission to the ISS.

Astronauts haven’t launched to the ISS from American soil since the Space Shuttle Program ended in 2011 — and NASA is desperate to begin again.

To that end, NASA partnered with Boeing and SpaceX to create the Commercial Crew Program. This allowed the two aerospace companies to fund new vehicles capable of taking astronauts to space without needing to hitch a ride on a Russian Soyuz rocket.

It began a race between the two companies to be the first to produce a crewed rocket. Boeing's Starliner recently undertook an uncrewed test flight to orbit, though an error forestalled its planned rendezvous with the ISS. Now, SpaceX is homing in on the goal, though it, too, has faced technical errors and setbacks.

But the timing of these tests is critical for NASA. In November, the Inspector General’s Office at NASA issued a report concerning both Boeing and SpaceX's progress. If they weren’t able to finish testing their crafts soon, it could affect the agency's ability to put astronauts on the ISS, or force longer stays for those going.

But with SpaceX completing the tests and with the data under review, astronauts may soon be flying in a Crew Dragon.