This Exoplanet's Atmosphere Is So Hot It Splits Molecules In Two

The day side of this scorching world rips hydrogen molecules apart — only to reform on the night side. 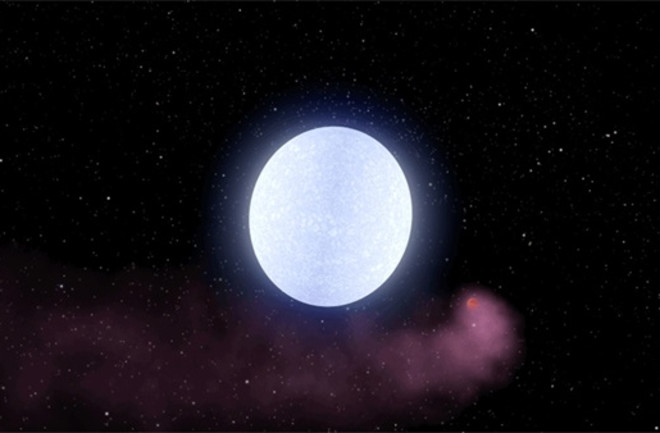 To shreds you say? The hellish world KELT-9b is so hot on its dayside that molecules of hydrogen in its atmosphere are torn apart, only to recombine again after making it to the planets cooler nightside. (Credit: NASA/JPL-Caltech)

The hottest known exoplanet is back in the news, answering some questions about ultra-hot planets, while also raising some new ones.

The planet, KELT-9b, was first announced in 2017. It’s roughly three times the mass of Jupiter, orbits its star every day and a half, and is a whopping 7,800 degrees Fahrenheit (4,300 Celsius). Just for the record, that’s hotter than some stars. And according to new research, the planet's dayside is also hot enough to tear apart hydrogen molecules, which astronomers recently observed.

Researchers, including Megan Mansfield from the University of Chicago, sought to understand how heat is distributed on this faraway world. So they watched carefully with the powerful (and soon to be decommissioned) Spitzer Space Telescope.

Like many close-in planets, KELT-9b is tidally locked to its star, meaning one side of the world is always facing its star, while the other side is permanently facing the chilling blackness of space. That means that when the planet crosses in front of its star, it shows its night side to us. And just before and after it passes behind the star, we glimpse its dayside. (It’s also how the Moon orbits Earth, with the nearside always facing us, and the farside always looking off into space.)

That tidal locking means KELT-9b only gets cooked on one side, like a burger on the grill you forgot to flip. As you might expect, it’s typical on such planets for the side facing the star to be much, much hotter than the eternal nightside. And by taking the temperature of both sides of KELT-9b as it orbits its star, astronomers can create a 2D heat map of the unevenly cooked planet.

But when Mansfield and her colleagues observed KELT-9b, they found that the two sides were more evenly matched then they expected. The hot side was slightly less hot, and the cold side less cold. What’s more, scientists would expect the hottest point on the planet to be at high noon, where the world’s surface is directly facing its host star. But instead, KELT-9b’s hot spot sits about 20 degrees to the east of noon, lagging behind. “None of our models predicted that,” Mansfield said.

On some planets, powerful winds distribute heat, carrying warm gases around to the planet’s cooler nightside. But for KELT-9b to function this way, its winds would have to race around it at nearly 150,000 miles (241,400 kilometers) per hour — a physical impossibility.

Instead, astronomers think the heat of the nearby star is tearing apart molecules of hydrogen on the hellish world, which then drift around to the planet’s dark side and reform. Based on models, this action of separation and recombination explains how heat can be more evenly distributed, Mansfield explains.

While there are no planets quite like KELT-9b, there are other super-hot planets where astronomers suspect the same star-powered atmospheric chemistry might be happening. By getting a good look at the dramatic case of KELT-9b’s heating, they hope to better understand the milder cases they might find on other worlds.

The new research was published January 7 in the Astrophysical Journal Letters.