This Exoplanet Is So Hot, It Might Be Evaporating 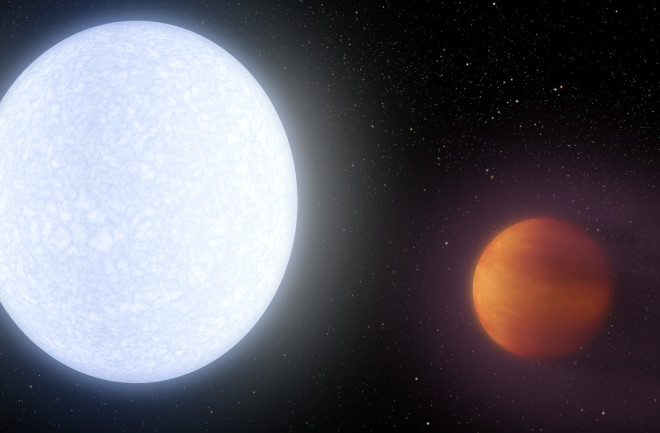 Kelt-9b and its parent star, which heats its surface to temperatures nearly as hot as the sun. (Credit: NASA/JPL-Caltech/R. Hurt (IPAC)) Astronomers recently announced the discovery of the hottest known giant exoplanet. Sitting 650 light years away in the constellation Cygnus, Kelt-9b is a scorching ball of gas roughly three times the size of Jupiter. Temperatures there are estimated to reach 7,800 degrees Fahrenheit, hot enough that the planet's atmosphere may be evaporating away into space, leaving a comet-like tail in its wake. Kelt-9b is so hot thanks to an extremely close-in orbit that takes it around its star just once every 36 hours. It's near enough that it will eventually be engulfed by its star, Kelt-9, when it reaches the end of its life and begins to expand as a red giant. Kelt-9 is about twice as large and hot as our sun, and this planet is one of only seven found around similar A-type stars. The star's radiation is enough to heat Kelt-9b to temperatures hotter than some kinds of stars and within about 2,000 degrees of our own sun. Though the planet is larger than Jupiter it is only about half as dense, the researchers write in a paper published Monday in Nature, because it has ballooned to massive proportions due to the immense heat assaulting its gaseous body. Researchers from Vanderbilt and Ohio State University found the planet using the Kilodegree Extremely Large Telescope (KELT), a low-cost observatory that scans large swathes of the sky, looking at bright objects to pick out the dips in brightness that indicate a planet could be passing between a star and the Earth. Had they waited longer, the team may not have been able to find the planet at all. Kelt-9b's orbit precesses, or wanders about, due to the fact that its star is somewhat egg-shaped, bulging out at the poles due to rotational forces. In 150 years or so, it will disappear from view entirely, not to appear again for millennia. It's not the hottest planet ever discovered, however. That honor currently belongs to Kepler-70b, a small rocky planet that orbits its star in just a little over five hours. Surface temperatures there reach to over 12,000 degrees. Though Kelt-9b may be nearly as hot as our sun, it will never see the kind of nuclear fusion and fission that power stars. That's because it's nowhere near big enough — the smallest stars need to be about eighty times as massive as Jupiter to create the pressure necessary to begin fusing their hydrogen into helium. Even brown dwarves, which aren't quite stars but will still occasionally fuse deuterium (a kind of hydrogen with an extra neutron), are larger. The planet may be getting smaller still. The astronomers think that the high temperatures are stripping planetary material from the atmosphere, which could potentially scour the planet down to a rocky core. They plan to observe Kelt-9b with more powerful telescopes, such as Hubble and the upcoming James Webb Space Telescope to gather more data to see how it behaves.