The observatory fills a key role in collecting infrared observations. 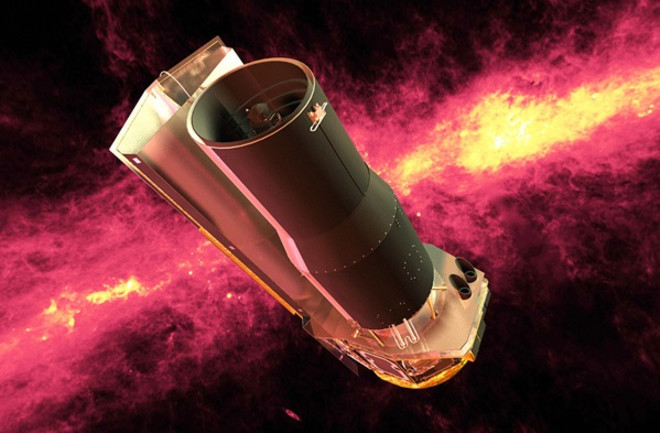 The Spitzer Space Telescope has helped astronomers unlock the infrared universe for over 15 years. (Credit: NASA/JPL-Caltech)

On January 30, NASA plans to shut down its Spitzer Space Telescope, which has provided key observations of the universe for the past 16 years. Spitzer gave crucial infrared data to scientists, and they are now looking to other telescopes to fill the gaps. Spitzer observes light in the infrared portion of the spectrum, which is light at longer wavelengths than what our eyes see. In the near-infrared (wavelengths closest to visible light), dust becomes transparent, letting astronomers peek into star-forming regions of galaxies or study cooler stars. At slightly longer wavelengths, infrared light can be used to study planetary systems around other stars and the disks that form them. At the longest infrared wavelengths, astronomers study cool clouds of dust and gas, and even peer into the hearts of galaxies wrapped in dusty clouds. Launched in 2003, Spitzer’s mission had two phases. Initially Spitzer’s instruments, cooled with liquid helium to –459 degrees Fahrenheit (–273 degrees Celsius), observed light with wavelengths from 3 to 160 micrometers during its cold mission. In 2009, the telescope ran out of coolant, beginning its “warm” mission. Spitzer could no longer observe longer wavelengths but continued observing at short wavelengths: 3.6 and 4.5 micrometers. But Spitzer is not the only space telescope in operation today, and current and future telescopes do have infrared-sensing capabilities. Here’s what astronomers will have in their infrared toolbox once Spitzer has been shut down.

The Hubble Space Telescope is famously one of astronomy’s best workhorse telescopes. It does have the ability to observe infrared light, but that capability is limited. Hubble can detect infrared light only between 0.8 and 2.5 micrometers, which doesn’t overlap with Spitzer’s current or past capabilities. So, while Hubble can certainly complement Spitzer and other infrared observations, it cannot replace Spitzer’s ability to chart the infrared sky.

NASA’s Wide-field Infrared Survey Explorer (WISE) space telescope observes the universe with a 0.4-meter mirror at wavelengths from 3.4 to 22 micrometers. Deactivated in 2011, the telescope was reactivated in 2013 as NEOWISE. Today, it is used to observe near-Earth objects, such as asteroids and comets. The telescope remains a valuable asset to infrared astronomy, but it doesn’t look beyond our own solar system, focusing on science only close to home.

The James Webb Space Telescope (JWST) is NASA’s next infrared space observatory. But JWST is still a little over a year from its current planned launch date of March 2021. JWST will observe from 0.6 to 28 micrometers, which ranges from the yellow-gold end of the visible spectrum to what astronomers call the mid-infrared. That covers the two wavelengths currently observed with Spitzer’s warm mission but doesn’t extend as deeply into the far infrared as Spitzer once could. (The definitions of mid- and far infrared can vary, but most astronomers define the far infrared as wavelengths between about 25 and 350 micrometers.) That means while JWST can replace Spitzer for astronomers who observe, say, stellar nurseries, cool stars, exoplanets, and the disks around young stars, it can’t completely replace Spitzer’s ability during its cold mission to observe very cold dust or the centers of some galaxies.

NASA’s proposed Wide Field Infrared Survey Telescope (WFIRST) has been on and off the chopping block in recent years. The telescope, if launched as planned in the mid-2020s, will use a 2.4-meter mirror to observe near-infrared light between 0.48 and 2 micrometers. That puts it more in line with the wavelengths Hubble can see, and below Spitzer’s wavelength range. WFIRST’s real claim to fame is right there in its name. It will have a wide field of view able to see 100 times more area of the sky than Hubble in a single shot, but with the same image quality. That will dramatically increase the amount of science it can do; and while it won’t look at the same wavelengths as Spitzer, its near-infrared range is suited to many projects including those that count up galaxies, supernovae, and exoplanets. So, are infrared astronomers just out of luck? After all, infrared astronomy is largely impossible from the ground because the water in Earth’s atmosphere blocks most infrared light. That’s why telescopes are launched into space, where they get a clear view. SOFIA is an observatory aboard an aircraft. It can fly above most of the water in Earth's atmosphere to observe infrared light.NASA/Jim Ross

But, it turns out, you don’t need to go all the way to space to see the universe in infrared. The Stratospheric Observatory For Infrared Astronomy (SOFIA) consists of a telescope mounted inside a modified Boeing 747SP aircraft that flies between 37,000 and 45,000 feet (11,300 to 13,700 m). That puts it above 99 percent of the water in Earth’s atmosphere. SOFIA observes light between 0.35 and 655 micrometers, which covers the entire range of Spitzer’s capability — both warm and cold — as well as JWST’s and more.

SOFIA is an observatory aboard an aircraft. It can fly above most of the water in Earth's atmosphere to observe infrared light. (Credit: NASA/Jim Ross)

In all, SOFIA is the best candidate to replace Spitzer in its entirety. Even better, SOFIA’s mirror is larger than Spitzer’s (2.5 m versus 0.85 m), so it can offer better image quality in some cases than the retiring telescope. And SOFIA’s telescope can be repaired and upgraded as needed, extending both its lifetime and its capabilities. But there are tradeoffs. SOFIA typically makes 10-hour flights, but it must still land for refueling and other maintenance. Because of Earth’s rotation, it can only observe the same region of sky for a maximum of a few hours at a time. The aircraft also takes time to get from one location to another and may not be in the right place to observe short-lived events. And finally, SOFIA is above most — but not all — of Earth’s atmosphere, so in some cases, observations are still limited by the layers above it. The Spitzer Space Telescope is a truly unique and remarkable telescope that has helped astronomers uncover clues about much of our universe, from the first stars and black holes to planets around nearby stars. Although observing the infrared sky without Spitzer may look slightly different in the future, astronomers still have tools to continue peering deep into the universe.