Meet the Big Crunch: In this theory on the origins of the universe, the Big Bang was not the beginning, but a repeating pattern of expansion and contraction. 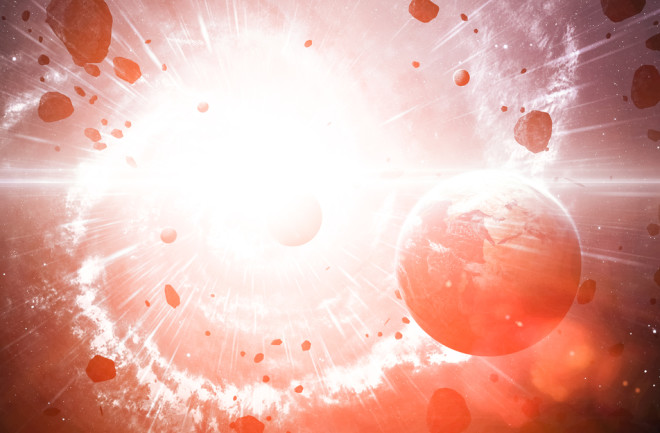 In Paul Steinhardt’s corners of the cosmology world, to say that history repeats itself would be a laughable understatement. That’s because according to him and a handful of peers, the universe’s form might be hurtling into a new cycle every trillion years or so.

The professor of physics and director of the Princeton Center for Theoretical Science co-authored a paper on this topic, A Cyclic Model of the Universe, with Neil Turok. The cyclic model of the universe he helped pioneer is just that: a theory that the universe forms itself again and again in cycles.

Proponents of this model are asking us to rethink the Big Bang and the rapid inflation of the universe. They contend that doing so could fill in some of the biggest gaps in our common understanding of the way space and time work.

The Big Bang and Inflation Model

The generally accepted understanding of the universe is this: About 14 billion years ago, the Big Bang happened. In its early seconds, the laws of physics as we understand them didn’t apply. All that would eventually become matter burst forth in a matter of seconds — first particles, like electrons and photons, and eventually neutrons and protons, the building blocks of our atoms. Early seeds of stars, planets, and galaxies expanded out from that momentous point in time and space. It spread in such a way that the universe became highly smooth.

Smoothness, on an enormous scale, just means that things within the universe are relatively evenly distributed. That is, if you were to put a cube around one section of the universe, it wouldn’t be much more dense than another randomly placed cube. On a smaller scale, like between galaxies or within a solar system, matter is “lumpy” and filled with clusters.

Physicists theorize that shortly after the Big Bang, something called “inflation” occurred. Essentially, what was once a tiny, packed-together universe expanded out rapidly in a fraction of a second, and it continues to expand today. Inflation is part of the current standard model of the universe, called the Lambda Cold Dark Matter (LCDM) model. In LCDM, the shape of the universe’s trajectory looks, in some depictions, like a funnel, its wide top growing and spreading further out over time.

That’s one interpretation. But there are others that have arisen out of the same bits of information that scientists can actually observe and measure in real life — that is, observational astronomy. The real life information is crucial if scientists are to use models to make actual predictions about the future of our cosmos.

“Cosmology is kind of teamwork, you need some people focusing on really pragmatical and observational stuff and you need people to go sci-fi,” says Leonardo Giani, a postdoctoral research fellow at the University of Queensland in Australia, whose studies focus on alternate models of the universe besides the standard model. “That's how it goes.”

What We Know for Sure

Theoretical astrophysics is all about educated guesses that are shaped by the few things we do know for certain. Something called the Cosmic Microwave Background (CMB) contributes to a big part of that observable information. The CMB is made up of the traces of radiation left over from an early phase of the universe. Radio telescopes can pick it up, and then translate the waves into a heat-map image of sorts.

This image actually shows us how the contents of the universe were distributed about 400,000 years after the Big Bang — the earliest observable snapshot of a universe devoid of stars, solar systems and galaxies. Everything was closer together and almost uniform, except for tiny fluctuations that became the matter forming stars and galaxies. This image serves as evidence that the universe started packed together, and has expanded to where it is today.

We also know that the universe continues to expand, and can even measure, to some degree, how fast it’s doing so. The CMB also serves to confirm that an earlier version of the universe was very hot, and our era is much colder.

Problems With our Current Model

Steinhardt says a number of problems arise with the inflation model, which itself expanded and corrected previous models that arose from Big Bang theory. The inflation model was supposed to explain why, for example, the universe appears so homogenous on a huge scale without the same initial conditions. But, Steinhardt says, there are so many possibilities that arise from an inflationary model that it makes the model itself less useful.

Previous models, Steinhardt says, don’t rule out predictions about the cosmos that are wrong. “It's like I came to explain to you why the sky is blue, but then when you look at my theory more closely, ‘Oh! My theory could have also predicted red, green, polka dot, striped, random [colors],’” Steinhardt says. “And then you say ‘Okay, what good is that theory?’ ”

Then there’s the singularity problem. The inflation theory, Steinhardt argues, also gets stuck at the point “before” the Big Bang, because according to it, there is nothing before it. “The fundamental philosophical problem with the Big Bang is, there's an after but there's not a before,” Steinhardt says. “In a similar way, we don't know ‘one time only’ things that happened in history.”

Mathematically, the Big Bang looks like it came from an undefined state — something that isn’t explained by the laws of physics under Einstein’s theory of general relativity. This is also called a “singularity.” To Steinhardt — but not to everyone — that’s the mathematical equivalent of a red flag. “We all learned in school, when you get one over zero for an answer, you're in trouble, because that's a nonsense answer. You made a mistake.”

In a related problem, there’s also some difficulty in reconciling the inflation theory with string theory and quantum mechanics, says Steinhardt. If the model correctly described the universe, other accepted frameworks of physics would agree with it. Instead, Steinhardt says they’re at odds. “When one's thinking about cosmology, you’re often reaching across fields of thinking, which are quite distant, either on the astro side or on the fundamental physics side and seeing, do they fit together?” The cyclic model, he says, helps do this.

The Cyclic Model and Its Spinoffs

A cyclic model of the universe is designed to solve some of the seemingly unsolvable problems of the Big Bang and inflation models. “It allows us to go beyond the Big Bang, but without any kind of magical philosophical issues,” says Stephon Alexander, a professor of physics at Brown University, and the co-inventor of an inflation model of the universe based on string theory. “Because time has always existed in the past.”

Scientists have proposed a cyclic model that could work mathematically in a few ways. Steinhardt and Turok’s model of a cyclic universe is one of them. Its core principles are these: The Big Bang was not the beginning of time; there was a previous phase leading up to it, with multiple cycles of contraction and expansion that repeat indefinitely; and the key period defining the shape of our universe was right before the so-called bang. There you would find a period of slow contraction called the Big Crunch.

So, instead of a beginning of time arising out of nothing, the cyclic model allows for a long period of time in the lead-up. It claims to fix the same problems as the inflationary theory did, but builds even further. For one thing, the existence of time before the Big Crunch removes the singularity problem — that undefined number. It also utilizes string theory and quantum fluctuations.

Like the LCDM, a cyclic model would also account for dark energy, an unobservable force that scientists believe is behind the accelerating expansion of the universe.  But in Stenhardt and Turok’s model, things get a little more like science fiction: Two identical planes, or “branes,” (in string theory, an object that can have any number of dimensions) come together and expand apart. We can observe the three dimensions of our plane, but not the extra dimensions of the other. Dark energy is both the force leading the branes into a collision, with separation between them. Expansion of the branes themselves follows, and dark energy draws them together again once they’re as flat and smooth as they can become.

Giani, the researcher, isn’t so sure, because of some of the assumptions this model brings in from string theory. He likes another cyclic model from Roger Penrose, a theoretical physicist at Oxford who came up with what Penrose himself called “an outrageous new perspective” on the universe. “I was completely amazed by it,” Giani said.

It’s hard to wrap your head around: In the distant, distant future, our solar system and galaxy will be engulfed by black holes, which eat up all the other mass in the universe, and then after an unimaginable amount of time, only black holes will exist. Eventually, only photons exist, which have no mass and therefore no energy or frequency, according to our accepted laws of physics.

Measurements of scale, Penrose explains, no longer apply at this stage, but the shape of the universe remains. At the moment of the Big Bang, he argues, when particles are so hot and close together that they also move at almost the speed of light, they also lose their mass. This creates the same conditions at the Big Bang as the cold, distant future universe. Their scale is no longer relevant, and one can beget the other. The remote future and the Big Bang become one and the same.

Ultimately, what humans can observe of our universe is limited. That’s why theories of the universe are never complete. They balance the small sliver of the universe we can observe with mathematical models and theory to fill in the rest. So, in cosmology, scientists search for observable phenomena that disprove their models, and reshape their theories again to suit the problem.

But as our technology rapidly advances, observations that support or detract from one model or another come more often. “It's completely worth making all this speculation in this work, because we are getting to the point in which this data will arrive,” Giani says. One such observation could produce compelling support for either a cyclic model or confirm the more accepted inflationary theory.

Because of how matter is distributed in our view of the oldest part of the universe (seen in the CMB), gravitational waves that reach us may be polarized, like light, at a particular frequency. Soon — within a few years, in fact — scientists may be able to determine whether this polarization exists. If it does, it will support the inflationary model. If this polarization doesn’t exist, it will undermine “slow contraction,” a hallmark of the cyclic model.

We’ll be one step closer to making sense of time and space, yet still on a journey within the cosmos that’s far from over.

[Correction: A previous version of this article erroneously stated that only protons would exist in a hypothetical future after black holes engulf our galaxy. This should have referred to photons, instead of protons. We apologize for the error.]