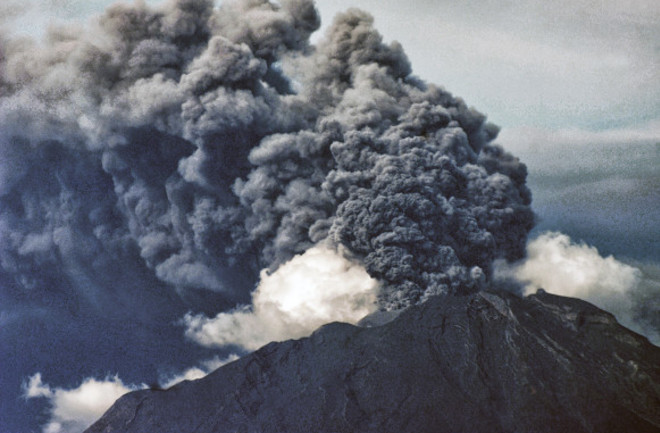 A thick plume pours from the Calbuco volcano in Puerto Montt, Chile, April 30, 2015. Ivan Konar/LatinContent/Getty ImagesCalbuco in Chile has spent the last few days fairly quiet, pumping out a small steam-and-ash plume. However, today the volcano produced the third significant explosive eruption since Calbuco came back to life last week. This explosion appears to be less vigorous than the first two eruptions, but the ~5-kilometer-tall (~16,000 foot) dark grey ash plume (see above) is likely to dump more ash and volcanic debris over an area already attempting to recover from the previous eruptions. The status update this morning from the SERNAGEOMIN may have foreshadowed today's explosion as they mention that volcanic tremor (usually associated with magma moving under the volcano) was much elevated compared to the last few days. The tremor really picked up around 1:09 pm local time, only about 10-15 minutes before the eruption began, according to the SERNAGEOMIN report on today's explosion. Today's eruption also produced new lahars on the slopes of Calbuco. If you haven't read David Pyle's summary of the Calbuco eruption on Volcanic Degassing, be sure to check it out. There you can find the initial estimates of sulfur dioxide released (0.3-0.4 million tonnes), probably too low so far to greatly impact global climate. An AIRS sulfur dioxide compilation of the southern hemisphere shows just how far that sulfur dioxide plume has spread in the upper atmosphere across South America and the south Atlantic Ocean and the same was captured by Aura's OMI detector as well. Also, be sure to check out the SERNAGEOMIN collection of Calbuco images on their Facebook page. They also have some great images of the impact of the ash fall on towns to the east of the volcano. CNN has some video of getting close to the volcano where much of the landscape is buried in the fallout of the two large explosions. Finally, if you're into photos of volcanic lightning, Francisco Negroni has a pile of spectacular shots of the Calbuco plume.

A compilation of AIRS sulfur dioxide data from April 23-29, 2015, showing the Calbuco plume spreading eastward. NASA The first two eruptions emitted ~210 million cubic meters of ash and volcanic debris. That may sound like a lot, but that's only about 0.21 cubic kilometers. This means the eruption was much smaller (so far) than the eruptions at Chaiten in 2008 and Puyehue-Cordon Caulle in 2011. However, 0.21 cubic kilometers is still enough to wreak havoc on areas for livestock/agriculture, people's roofs and sediment in river channels. Right now, over 6,000 people have been evacuated due to the ash and mudflow hazards -- and there has been some criticism on how the evacuations have unfolded. The fish farming industry around Puerto Montt has also reported heavy losses, possibly as much 21 million fish, due to the ash fall. Remember, you can watch the eruption on the (now) two SERNAGEOMIN webcams pointed at Calbuco.