These Tiny 'Brains' Could Help Demystify the Human Mind

Researchers around the world are growing brainlike organs to unravel how people evolved to think. 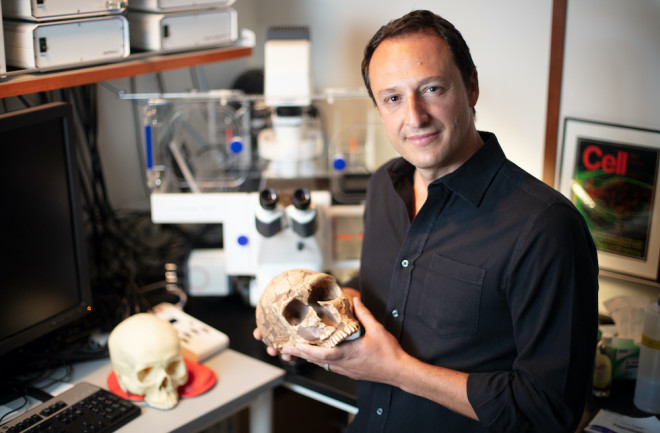 Muotri’s lab hopes to pin down the genetic mutations that created the human mind as we know it.(Credit: Muotri lab/uc san diego)

The secrets behind the evolution of the human mind might lie within the thousands of tiny “brains” called organoids that neuroscientist Alysson Muotri has grown in his laboratory at the University of California, San Diego, since 2011.

His team placed a Neanderthal gene into each organoid to learn how it affects brain growth. The experiment marks the beginning of an effort to understand how genetic mutations set our minds apart from those of earlier hominins and from our closest evolutionary cousins, the great apes. In this intellectual quest, Muotri and other scientists around the world have pioneered techniques for growing brain cell cultures in three dimensions — a novel way to revive the past.

The mystery arose about 7 million years ago, when our primate relatives diverged from the ancestors of chimpanzees. After that split, something enabled the human lineage to grow larger brains. Eventually, human brains swelled to an average of three times the size of those in chimpanzees. This had to result from genetic mutations — and brain organoids are helping scientists reveal exactly which genes were involved.

These lab marvels emerged from a concept first publicized in 2008 by Yoshiki Sasai of the private research foundation RIKEN, based in Tokyo. Sasai suspended cells in a liquid nutrient solution that fostered their growth into three-dimensional cultures. This type of cell proliferation more closely replicates the body’s natural processes than typical cell cultures grown on flat petri dishes. In Muotri’s case, he uses chemicals to transform stem cells into neurons. After three to four weeks, each neural progenitor cell begins forming separate brain organoids.

Organoids are not perfect models, though. An average human brain has roughly 100,000 different types of cells and blood vessels to provide itself with nutrients, according to Muotri. Brain organoids typically have fewer than a dozen cell types and lack blood vessels. This limits them to representing the earliest stages of brain growth. Still, they allow for experiments that would be logistically (or ethically) impossible in living humans or apes.

With these models, Muotri’s team hopes to determine how the Neanderthal variant of a gene named NOVA1, which is involved in brain growth, may have functioned differently than the modern human version. They first compared previously published Neanderthal genomes to current human ones, and identified 61 genes that differ between the two. Then, they focused on growing organoids with the two different variants of NOVA1, which is associated with early neuron and synapse development. Neurons power most brain activity by communicating electrical signals other across gaps called synapses; this forms the biological basis of thought. Ultimately, genes like NOVA1 make the human mind possible. Given the gene’s influence on the brain, Muotri predicted significant differences between the “Neanderthalized” organoids and the modern human ones.

Because the Neanderthal NOVA1’s genetic code differs from the modern human’s by a single letter, it’s fairly simple to edit the gene inside stem cells before they become neurons and grow into organoids. “We were looking for the low-hanging fruit,” says Muotri, “and NOVA1 checked all the marks.”

Muotri’s team cultivated between 3,000 and 5,000 Neanderthalized organoids and compared them with a similar number of modern human versions. The Neanderthalized organoids were relatively smaller and lumpier. As reported in a Science study from February 2021, researchers also detected differences in neuron interactions and changes in the proteins involved in synapse firing. This may indicate that extinct humans, including Neanderthals, thought differently than modern people.

But Muotri cautions that a lone mutation can only reveal so much about Neanderthal brains. The Neanderthal NOVA1 may have operated differently inside a complete genome, he adds. Genes or pieces of “regulatory” DNA might change when NOVA1 turns off and on, influencing Neanderthal neuron growth. Future work at Muotri’s lab will attempt to discern how other Neanderthal genes affect brain cell growth, along with the broader differences between human and Neanderthal brains.

We can also learn about human brain evolution from our more distant (and furrier) relatives. Until 2 million years ago, hominin brains weren’t much different from chimpanzee brains in size or shape. But both Neanderthal and modern human brains outsize those of apes, and it’s unclear why. Madeline Lancaster’s lab at the Medical Research Council Laboratory of Molecular Biology in England has found a potential explanation. Using cells from chimpanzees and gorillas, sourced via veterinary procedures, Lancaster created stem cell cultures to grow brain organoids. She compared these with organoids made from human cells — somewhat similar to Muotri’s work with Neanderthal genes — and observed them as they expanded.

The result: The human brain developed more slowly, says Lancaster, as reported in a paper published in Cell last April. The chimpanzee organoids matured quickly over about five days, during which the stem cells transitioned into neural progenitor cells before maturing into neurons. Almost all of the brain’s neurons, regardless of species, form from the supply of these in-between progenitor cells. Human brains spend an extra day in this transitional stage, which allows the progenitor cells to complete one more cell division. That extra step allows human brains to hold about twice as many neurons as chimpanzee or gorilla brains. This property likely comes from a protein dubbed ZEB2, which signals the brain to halt neural progenitor cell production and start turning them into neurons. Humans begin producing ZEB2 later than apes, providing more time to produce the cells that eventually form neurons.

Pinning down when the crucial mutations to the NOVA1 gene occurred, along with the timing of the gene behind the ZEB2 protein, remains difficult. But the fossil record provides direct evidence of when human ancestors’ brains began to expand. Paleoanthropologists Christoph Zollikofer and Marcia Ponce de León of the University of Zurich in Switzerland led a comprehensive study, published in Science in April 2021, of the insides of fossil hominin skulls. They used computerized scans to examine the brain impressions and showed that hominins older than 1.7 million years retained an apelike brain structure. After about 1.5 million years, when the species Homo erectus evolved, the traits that characterize modern human brain structure — expanded frontal and parietal lobes — began emerging. “The first 5 million years of human evolution was basically about locomotion, and probably diet, not the brain,” says Zollikofer.

Moving forward, brain organoids will be crucial in investigating which changes to the human genome allowed our ancestors to develop today’s minds. Lancaster’s future work will focus on aspects of developmental timing in humans, like determining which gene flips on the ZEB2 protein to develop neurons.

As for Muotri’s lab, they plan to create organoids to explore the other 60 gene mutations that distinguish Neanderthals from modern humans. At least four such mutations affect the brain in some way, Muotri says. He hopes that studying them will reveal what makes Homo sapiens’ minds unique. “There is a tendency now to believe that the Neanderthals were so similar to us, that you could see them in the subway and they would not be recognized, but I think our research is saying they are quite different,” says Muotri.