These Spacecraft Will Visit Jupiter After Juno 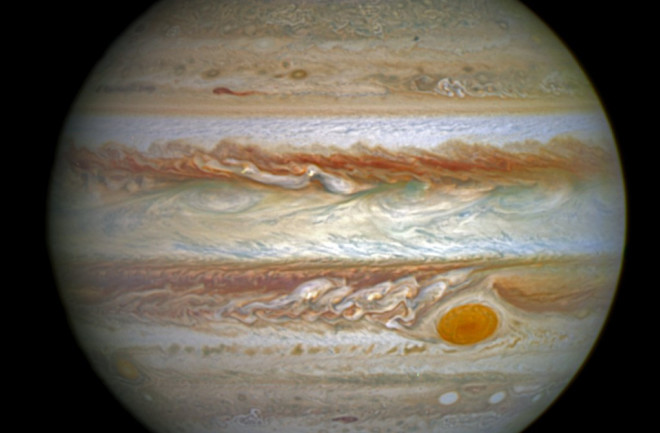 Hubble captured stunning images of auroras in Jupiter's atmosphere. (Credit: NASA, ESA) Juno (JUpiter Near-polar Orbiter) is the sixth spacecraft to study Jupiter (give or take a few gravity assists), but will be the second to fall into orbit around the gas giant following the Galileo probe in 1995. It is part of NASA's New Frontiers space exploration program that specializes in researching the celestial bodies of the solar system. Juno was launched on August 5th, 2011 from Cape Canaveral Air Force Station in Florida and intended to be placed in a polar orbit around Jupiter to study the planet's composition, magnetic and gravity fields, and the polar magnetosphere. Even though Juno's scientific mission only lasts for a year, many more spacecraft are headed Jupiter's way.

An artist's rendition of the JUICE spacecraft. (Credit: ESA) The next upcoming Jupiter mission following Juno is the European Space Agency's (ESA) first large-class mission in its Cosmic Vision program, the JUICE (JUpiter ICy moon Explorer). It is planned for launch in 2022 from the Guiana Space Centre in French Guiana and will arrive at Jupiter in 2030. JUICE will then monitor Ganymede, Europa, and Callisto, three of the four Galilean moons, as well as Jupiter for three and a half years. As all three of these worlds are believed to possess significant bodies of water beneath their surfaces, and the JUICE Mission will explore their habitability in depth. On December 9th, 2015, ESA and Airbus Defence & Space signed a contract signifying that Airbus would be building the spacecraft at their base in Friedrichshafen, Germany. The scientific instruments on JUICE will be built by scientific and engineering teams from all over Europe, with some participation from the United States and Japan.

An artist's rendition of the Europa Multiple-Flyby mission approaching its target, Europa. (Credit: NASA/JPL-Caltech) The next upcoming mission to Jupiter is the Europa Multiple-Flyby Mission spacecraft (formerly known as the Europa Clipper) comprising an orbiter and a lander. It is planned to be launched sometime in the 2020s, with the earliest target date currently set for 2022 (fingers crossed.) The original proposal called for the craft be inserted into the orbit of Europa, but because of the harsh radiation coming from Jupiter, it was later decided to orbit Jupiter and then make occasional flybys of Europa. This spacecraft would arrive at Jupiter in just under two years if it were to launch on the heavy-lift Space Launch System, but it has not been decided yet how long the scientific phase will last. The Europa Multiple-Flyby Mission's goal is to study the Galilean moon Europa with a series of flybys and a possible lander. Following discoveries made by the Galileo spacecraft during its eight year orbit around Jupiter, the orbiter plans to study the subsurface ocean under the moon. Nine scientific instruments have been chosen for the orbiter, all being contributed by various universities and laboratories such as the Jet Propulsion Laboratory, Arizona State University, and the University of Colorado Boulder.

An artist's interpretation of the IVO's volcanic plume flyby. (Credit: Fourth Millennium) The Io Volcano Observer (IVO) is a proposed robotic spacecraft proposed by the University of Arizona and John Hopkins University's Applied Physics Laboratory in 2010, and in 2015 as a NASA Discovery class mission — it was also a contestant for NASA's New Frontiers program. With the newest Discovery-class future mission being determined by NASA by September of 2016, if IVO is selected for the 13th mission, it would launch on May 29th, 2021. IVO would have a five year transit to Jupiter with an orbital insertion date of February 2026 and then would have a 22 month scientific phase consisting of at least eight orbits. It is a low-cost mission to study the volcanism on Jupiter's moon Io and its impact on the entire Jupiter system. Specifically, the spacecraft would study Io's induced magnetic field, the temperature of the lava, the global heat flow and the composition of the atmosphere, volcanic plumes and lava. As seen first by Voyager 1, Io's volcanism is likely powered by tidal heating, a process that may affect worlds like Europa and Enceladus and keep their inner oceans warm. (Io likely does not have internal oceans of water, but instead is filled with magma.)

The last proposed spacecraft to the Jupiter system is the AJAX (Advanced Jovian Asteroid eXplorer) that is also in the running for NASA's future 13th Discovery-class mission. It would have roughly the same timeline as the IVO with a hopeful launch in 2021. The goal of AJAX is to cram flybys, orbits, and landings into one mission to study one of the Jupiter's Trojan asteroids. A Jupiter Trojan, otherwise known as a Trojan, is an asteroid that shares the same orbit as Jupiter, but orbits packed together with other small bodies either 60 degrees ahead of or behind the planet. AJAX would have a twelve year cruise time to the asteroid and after a year of observations, it would drop a small instrument package onto its surface.