These Experiments Are Building the Case to Terraform Mars 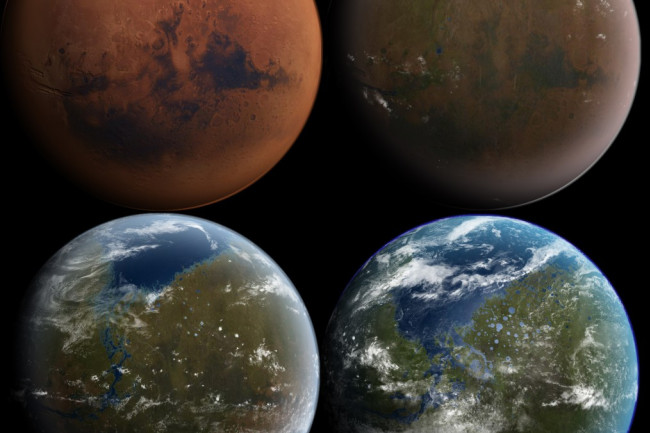 An artist's conception of what Mars could look like as it gradually becomes more habitable. (Credit: Daein Ballard/Wikimedia Commons) Whether it's extreme climate change, an impending asteroid impact, scientific curiosity or even space tourism, there are compelling reasons to think about calling Mars our second home. But before expanding humanity's cosmic real estate holdings, scientists will need to make the Red Planet feel a little more like our blue marble. That, in a nutshell, is the goal of researchers thinking about ways to terraform another planet. Elon Musk, of Tesla and SpaceX fame, has suggested we nuke the polar ice caps on Mars to unlock liquid water and release clouds of CO2 that would thicken the atmosphere and warm the planet. This notion got some press last year when Major League Baseball player and amateur astrophysicist Jose Canseco tweeted: "By my calculations if we nuked the polar ice caps on Mars we would make an ocean of 36 feet deep across the whole planet," thereby enshrining the idea in our popular imagination. Giant mirrors concentrating sunlight on the poles and smashing an entire moon into Mars also top the list of grandiose proposals to Earth-ify the Red Planet. While we may not utilize the kind of cataclysmic forces that some futurists imagine, there are very real efforts, backed up by solid science, currently underway that are building a case for terraforming, one small step for mankind at a time.

Technically, we're already getting practice terraforming at a planet-wide scale. "There's one solution to terraforming that makes sense when you work out the numbers and it's something that we know how to do," says Chris McKay, a planetary scientist at NASA's Ames Research Center. "And that’s warming the planet by greenhouse gases. That’s basically how we’re warming up the Earth." The basic plan for creating a livable environment on Mars goes like this: Introduce enough greenhouse gases into the atmosphere to begin a cycle of warming, melting the polar ice caps and releasing CO2. This would kickstart a feedback loop of warming as more and more greenhouse gases enter the atmosphere. When the atmosphere thickens and temperatures warm to the point where life could survive, scientists would introduce hardy microbes that would synthesize the gaseous chemicals, beef up the atmosphere and add molecular diversity to the once-barren planet. Over time, we'd plant trees to provide oxygen, and at some point the Red Planet would be fit for human habitation. All that's left is patience. Generations and generations of patience. Based on this plan, McKay estimates that we could fully terraform Mars in about 100,000 years. There are efforts currently under way to study how we might introduce extremophile bacteria and hardy plants to the Martian environment, once the process of warming is under way. 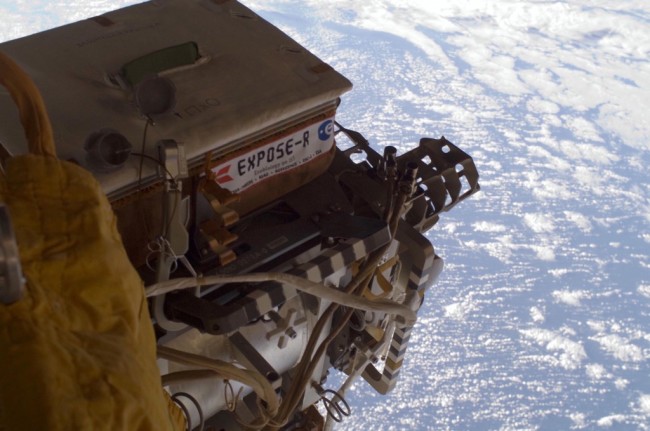 The EXPOSE-R experiment, seen from the International Space Station. (Credit: NASA) The EXPOSE experiments were a collection of crates filled with different bacteria, lichens, fungi and seeds that were attached to the outside of the International Space Station and left exposed for months at a time. Scientists wanted to determine if microbes could withstand the punishing cold and damaging radiation of outer space. Organisms that could reawaken from a dormant stage once back on Earth could be good candidates to colonize another planet. In the first round of testing, a few organisms and seeds grew and reproduced once they returned to Earth — namely those that were shielded from solar radiation. Organisms placed in a simulated Martian environment in the experiment did even better. 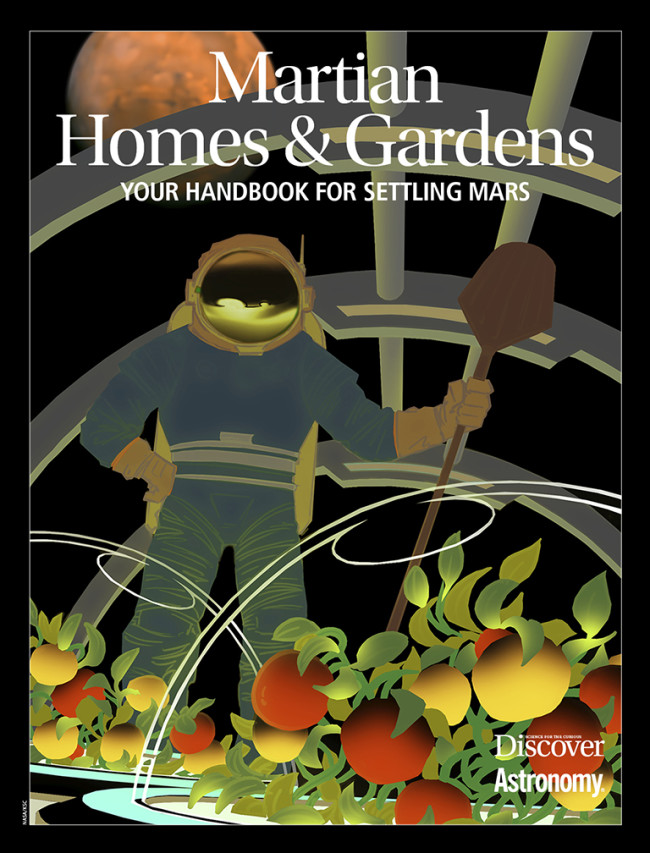 This experiment showed that there are Earthly organisms that could theoretically survive on another planet. McKay notes that EXPOSE was designed to identify organisms could survive in space, not necessarily organisms that could populate another planet. Still, the research reveals the kinds of microbes that might thrive on an otherwise inhospitable planet. Part of the second round of the experiment, EXPOSE-R2, just returned from the ISS in March along with Scott Kelly. The results of that experiment should come out in the fall.

Making Our Own Microbes 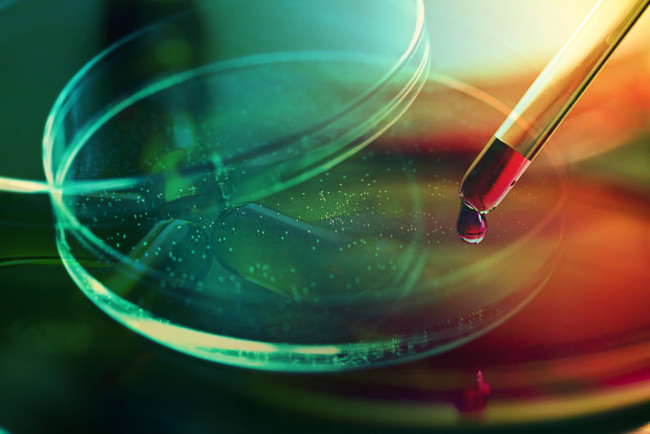 (Credit: isak55/Shutterstock) Instead of looking for Martian-ready microbes that already exist on Earth, scientists could someday build them. A group of scientists funded by DARPA is working on compiling a genetic library that they describe as the "Google Maps of genomes", according to Motherboard

. The database would allow researchers to quickly find genes that encode for useful characteristics from a database of different organisms. In this way, they could pick and choose from multiple genomes to create a microbe that possesses resistance to cold, the ability to thrive in low-pressure environments and the capacity to produce its own food, among other things — all attributes needed to colonize Mars. Having the genetic code for these characteristics at hand would allow researchers to use CRISPR and other gene-editing techniques to create an organism that combines a host of useful characteristics into one microbe. While we don't know if any one microorganism on Earth could survive on another planet, by picking and choosing from multiple genomes, we could, perhaps, engineer one that does.

It's All in the Dome

Instead of changing a whole planet, why not just terraform a few choice locations? This idea, called para-terraforming, would use large domes to enclose a parcel of land that could be engineered for sustainable habitation. Plants grown inside would provide both food and oxygen, supported by bacteria and microbes that would synthesize the chemicals necessary to support life. An Indiana-based company called Space Hardware Optimization Technology (SHOT) has proposed

such a concept, supported by funding from the NASA Institute for Advanced Concepts, and is working to develop technologies needed to bring the idea to fruition. SHOT hopes to one day send a test environment to Mars, filled with all of the organisms and systems needed to sustain life. It would take the form of a small dome, rooted in Martian soil, that would become a life raft of sorts for the microbes inside. It's basically the 100,000-year plan, but on a smaller scale. 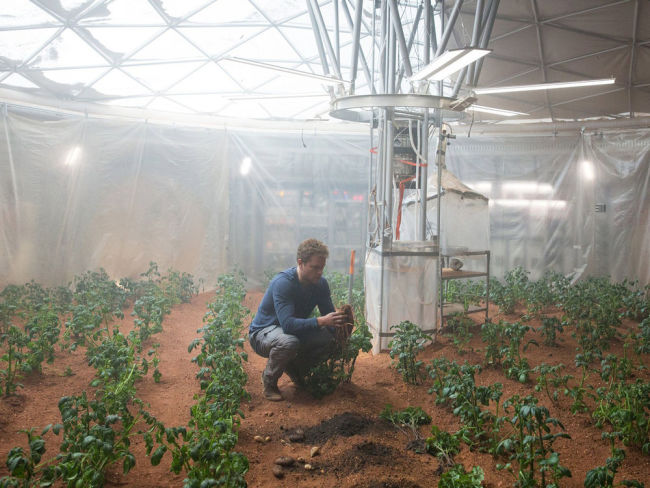 (CIP), the researchers are attempting to grow 100 different varieties of potato in soil that is analogous to that found on Mars. They are hoping to find plant varieties that are well adapted to the Martian climate, and figure out how to cultivate plants in bleak environments. Potatoes were an easy choice because they are both calorie-dense and grow in harsh, dry conditions similar to those on Mars. There are also an apparently unlimited

number of ways to cook them — useful for staving off the monotony of eating the same brown tuber every single day. The Phoenix lander in 2008 found that the dirt on the Red Planet contains magnesium, sodium, potassium and chloride — all nutrients that plants need to grow. Proving that this step is feasible is a major hurdle for potential off-planet inhabitants to clear. Any colonies on other worlds will need to be self-sufficient, so colonists will need to alter the environment significantly enough that large-scale farming is possible. In case Martian soil proves to be barren, researchers are also exploring other methods of growing crops, such as aeroponics

, or growing plants in a moist enclosure without dirt.

NASA is also testing the limits of Earth's foliage in a separate experiment high in the mountains in Mexico. McKay serves as the project's senior advisor, and he says it is an initial exploration of how plants cope with extreme environments. Scientists will place several species of trees and plants in insulated domes above the tree line where they wouldn't otherwise survive. They hope that sheltering the trees will "trigger a sort of a feedback where the organisms get going and they enrich the soil and they create conditions that are more favorable for life, which allows the organisms to continue growing even if we remove the domes," says McKay. Such a process would likely be instrumental to terraforming Mars, where the alterations would have to proceed in a series of small steps, each increasing the capacity of the planet to support life. "As you’re warming up Mars, initially it will all have to be artificial," says McKay. "But, at some point, it gets warm enough that you can put in plants, simple hardy plants, and at some point it gets warm enough that you can put in trees." And the process continues from there, slowly introducing greenhouse gases and breathable elements to the atmosphere, all in the hopes of creating a planet where humans could safely step outside on a Martian evening and look back fondly at our blue-green homeland.