The Toll of Long-Term Spaceflight on Human Health

Ranging from a significant increase in brain volume to pituitary gland deformation, the hazards of long-term spaceflight should not be underestimated. 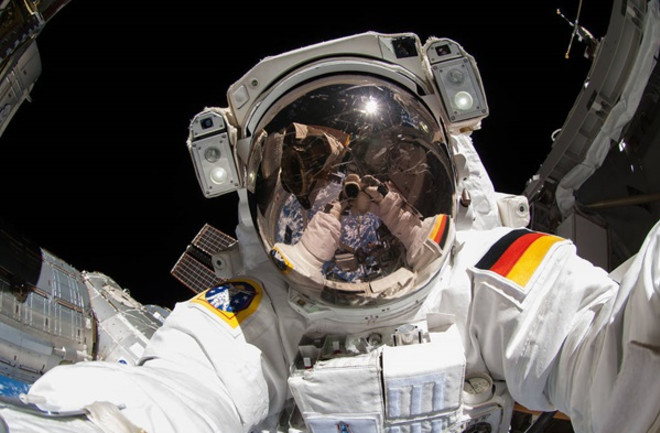 ESA astronaut Alexander Gerst takes a selfie during an EVA outside the International Space Station in 2014. New research shows that when astronauts spend extended periods of time in space, their brains and eyes can suffer. (Credit: NASA/SPL/Barcroft Media)

Researchers have long known that astronauts experience significant physical changes during spaceflight. These changes were first seen in test animals that ventured — or, more accurately, were launched — into space before humans. But similar effects also were noted in Mercury astronauts soon thereafter.

To date, most of the research on how spaceflight affects the human body focuses on the muscles, bones, and hearts of astronauts. But many astronauts also report changes in their visual acuity following spaceflight — a condition known as spaceflight-associated neuro-ocular syndrome, or SANS. Astronauts with SANS can develop impaired short-distance vision, experience headaches, and/or see floating blurry spots known as scotomas.

Now, a new study has evaluated how long-term spaceflight is tied to common changes seen within the skulls of astronauts, which impacts both their brains and eyes. The researchers also investigated how these intracranial changes could be related to SANS, uncovering some surprising results. The new findings were published Tuesday in the journal Radiology.

The Hazards of Long-term Spaceflight

To carry out the study, the researchers collected data for 11 astronauts — 10 men and one woman — who lived aboard the International Space Station (ISS) for extended periods of time. On average, the astronauts stayed on the ISS for 171 days, and five of the subjects also had previous spaceflight experience. Before their missions, the astronauts underwent magnetic resonance imaging (MRI) scans that captured preflight brain images. Then, they had additional MRI scans one, 30, 90, 180, and 360 days after their return to Earth.

“We hypothesized from previous MRI studies of the eyes that elevated intracranial pressure during spaceflight could potentially contribute to the changes in vision for astronauts,” Larry Kramer, a professor at the McGovern Medical School at the University of Texas Health Science Center at Houston and lead author of the study, said in a UT Health News statement. “And we wanted to document if there were any changes in the brain that could support this theory.”

By comparing and contrasting the preflight and postflight scans, the researchers found statistically significant changes in several key organs and structures.

Comparison between preflight and postflight MRI scans revealed small but significant changes occur in the brains of astronauts during long-term spaceflights. (Credit: Radiology 2020)

First, the overall volume of the astronauts’ brains increased (particularly the white matter), as did the volume of their cerebrospinal fluid (CSF), the liquid that bathes our brains and spinal cords. Both increases were on the order of about 2 percent.

The team also noted more CSF flowing through the astronauts’ brains postflight. Likewise, the volume of their ventricles, which are the cavities that carry CSF through the brain, also increased. These increases in both volume and flow might be small, but the researchers think they’re still meaningful. And, what’s more, the changes appeared to last through the entire duration of the postflight study.

Another intriguing finding was that for six of the 11 astronauts, the sizes and shapes of their pituitary glands — which serve as a kind of “master controller” for a variety of hormones used throughout the body — also changed. According to the researchers, the morphed shape of the pituitary glands may indicate an increase in the pressure of fluid within the brain. And that increased fluid pressure, they say, may be part of the root cause of SANS.

However, Kramer admits to Astronomy that the root cause of SANS still may be more complex than just increased intracranial pressure. And that's partly because astronauts do not experience the same range of symptoms as people with increased intracranial pressure on Earth. Furthermore, the pituitary gland also resides next to the optic nerve, which carries inputs from the eyes to the brain. So, it’s possible that the pituitary gland presses on the optic nerve more than usual during spaceflight, partially causing astronauts to experience the visual symptoms of SANS.

The Road to Deep Space

With this work, scientists have taken yet another small step toward understanding how spaceflight impacts the human body. And though the study of humans in space began more than half a century ago, it will surely continue for as long as we strive to reach Mars and beyond. The long-term changes found in this new research may lead to structural changes in the eyes of astronauts, a potential cause of SANS. In other words, when you’re in space long enough, your eyes may suffer as the brain grows larger.

But just how much would such changes impact a long-term mission to another planet?

One challenging hurdle to establishing a human colony on Mars may be that the relatively weak gravity on the martian surface (some 40 percent that of Earth) may not be strong enough to stave off SANS, which is a common condition astronauts often get during long stays on the International Space Station. (Credit: NASA)

A good ballpark figure for the duration of crewed Mars mission is about 200 days each way, plus the time spent on the martian surface. (In total, this would be much longer than astronauts spent on the ISS as part of the new study). Presumably, when a human crew arrives on the Red Planet, they must remain mentally sharp and physically fit for the duration of their stay. And because SANS tends to cause astronaut's short-distance vision to deteriorate, it could impair their ability to perform vitally important tasks — both on the surface and when traveling to and from Mars.

The visual acuity of the astronauts flying such a mission would be critical at many key phases of the flight — including rendezvous, docking, landing, and launch. Plus, while the moon's gravity is a meager 17 percent as strong as Earth's, Mars' gravity is still only about 38 percent as strong as Earth’s. This suggests that spaceflight-induced brain and eye changes could get progressively worse after astronauts land on either the lunar or martian surface, as they would still be far from experiencing full Earth gravity.

Although scientists may not know the long-term effects of living on the surface of the moon or Mars, there are fortunately treatments for SANS that already exist, including special glasses that correct alterations to short-distance vision.

These special glasses, known as space anticipation glasses, or SuperFocus Glasses, have an adjustable focal length that can be individualized to the wearer’s needs. Other potential treatment options include the medication acetazolamide, which is used to treat glaucoma — a condition where the eyes experience an unhealthy increase in internal pressure. And Kramer says other countermeasures are still being developed to combat the physical changes seen in astronauts.

The new study, while not describing novel treatment options for astronauts with SANS, does suggest a possible reason for why it develops. And because the observed changes lasted long after the astronauts returned to Earth, the researchers say, moving forward, it is necessary to keep an eye toward preventive measures and alternative long-term treatments.