The Southern Reaches of Heaven

So you've got the idea by now (if you've been reading about my Walkabout) that Taiwan is wonderful for food. Taipei is said to be the most important city on the world map of Chinese cuisine for the sheer quality, quantity and variety. That may well be true enough.....

But the real Source is Tainan, in the South of the island. Getting -at the last minute- the opportunity to go there, I gave a seminar on the 23rd December to the String Theory group (essentially all of the Taiwan string community came...this was part three of a series of talks), shut down my computer, excused myself as best and genuinely apologetically as I could, and grabbed my bags and headed for the door. A while later, after fortifying myself with a bowl of beef noodles (what else?) at Taipei Main Station, I headed for the bus, and the four and a half hour journey from Taipei to Tainan. There's a bewildering variety of bus stops, and several bus companies to figure out, and getting on little shuttle buses to go to the other place to get the main bus..... and lots of yelling of destinations which I could not understand....I will not claim that I figured this all out myself......the brother of the friend I was going to stay with was also travelling this way, and so he offered to accompany me. I was dreading the bus journey, to be honest. It is not that I can't do long bus journeys - as a student, to save money on home visits, I regularly took the marathon nine hour one leaving from from London Victoria at midnight, headed to every busstop between London and Preston - but that it was a bit cold, I only had my jacket, and I was not as well prepared in my mind for it either... I was not really in the mood for it, but it was the only way to get there and I was certainly going to go and was prepared to put up with whatever hardship it entailed.

When the bus actually showed up, and I boarded it, I felt a bit silly about being apprehensive. It was not so much a bus as actually twelve fat -FAT- soft beds on wheels! With large (ish) TVs with lots of movies. And massagers built into the chairs. And curtains. And blankets. Yes.....there's so much room to recline these guys all the way back and put out the leg rests because there are only. twelve. seats. Fantastic. Did I mention how much I love Taiwan? Four and a half pleasant hours later, having gorged on incomprehensible kung-fu movies (helpfully dubbed and subtitled from Cantonese to Mandarin), and got about half an hour's shut-eye, the bus pulled up at a street corner in the middle of somewhere or other, and we were in Tainan. Not much later - about 1:00am - it was time to begin the real business of why I was there.... to spend time with my friend and eat my way around Tainan. My food guide (this was going to be way deeper culinary exploration than I could do on my own) for the two days I'd be there, the dear friend I came to visit, was reassured a day earlier when I told her that I was not looking for Western food of any sort. I wanted to try what was considered good to eat by the locals, and she should not assume that my palate was unable or unwilling to try things. This cleared the air, and I heard her (over the phone when we had the conversation) breathe a sigh of relief, as this meant that she could really have some fun exploring some of her favourite places and sharing some of the tastes of Tainan with me. (I don't think she was fully convinced until later though.... she seemed to be often surprised when I asked for certain foods, or enjoyed certain flavours that were considered to be only to local tastes.) So stopping only to pick up my friend's husband from home, we went to the restaurant of a friend of theirs to start with. While spending my time untangling myself from the establishment's (shall we say, to avoid blushes) extraordinarily friendly hostess (who was also trying to drink me under the table... goodness knows what lay in wait for me there...), I worked my way through just the first of many excellent meals in Tainan: 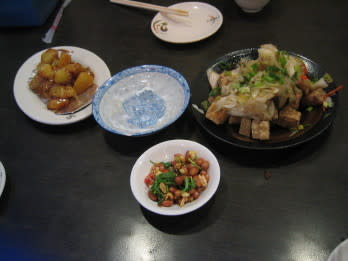 Tainan is known for many excellent variations on classic meals, and originating entire styles of doing things, new dishes, etc..... Food-o-philes dining in Taipei are often heard to (rightly) say that something is really good, but then if you listen carefully you'll hear them whisper ("but there's this place I know in Tainan that does it even better..."). Have a look at the photo above. (I wish I'd taken a better picture, but I was involved in defensive actions with my free hand...see earlier...the hostess was a bit drunk I think; I don't have that effect on women normally, as far as I'm aware.) The simple-looking dishes were marvellous. The foreground is a collection of tasty flavoured nuts as appetisers. To the right is what's called colloquially "stinky" tofu. Yep. It is stinky. But I've discovered (I address this to the Westerners) that stinky tofu is only the slightly unpleasant phenomenon some speak of if you get a whiff of it at the edge of its domain. If you're right in the midst of it, you're fine....after you let the scent sink deep inside you. Then there is no scent. In Tainan, it is a specialty to lightly fry the stinky tofu in flavoured oil of some sort, as done here. Delicious! What's that thing on the left? Ok. I love this: Take the tastiest sweet potatoes that you know and cook them slowly until delicate and soft. Now take them and dip them into (perhaps roll them in) a sweet golden sugary syrup that is superheated to wonderfuly dangerous temperatures. Bring them to the table. Bring also a plate of wet ice (middle). How do you eat these wonderful things? Pick them up with your chopsticks, dip them into the ice for a few moments to bring them down from thermo-nuclear temperatures and pop them into your mouth! Oh wow! (Eat them all up fast now since as the temperature drops, they'll start sticking together as the sugar/syrup starts solidifying.....) Heaven. Again. And I had 48 hours of this to go. -cvj