Well, I spent 24 hours in bed yesterday, very ill, and unable to eat anything. I just drank lots of water. Today, I'm quite a bit better, but while my system is recovering, but I'm staying off food for another day. However, I'm at that stage where I can think about food, and in fact I can dream happily about it. When I dream about food, a likely place to feature is Taiwan, where I was on my walkabout, as described earlier. One of the things I love about the place is the remarkable variety of high quality and delicious food which is available everywhere, and at a wide range of times of the day. I'll focus on smaller places for now.... street food and small places selling noodles and dumplings. A typical street-food scene is something like this:

This is an alleyway maybe one step off the main road, and is in fact part of a long line and network of alleyways which are similarly packed with stalls, stands, and hole-in-the-wall places selling little edible pieces of heaven.

My favourite thing to do in a new location is find a place that I can get good beef noodles. The first day I was there (in Hsinchu) I asked one of the local physicists, John Wang, to point out a few places he liked (as a sort of starter), and from then on I was happy. I like having a place that I like, that does the meal the way I like, and then I just show up there regularly to sit and think by myself for dinner or lunch, over a nice hot bowl of beef noodles ("really good noodles"). It got to the point that the couple who run (own?) the place recognised me with a smile as I came in and started preparing the food before I sat down. I don't know why I like it so much (it started years ago in 1994 with a braised beef soup at a restaurant on Nassau street in Princeton...don't remember what it was called.... opposite a supermarket... is it still there I wonder?) but I really can't get enough of it. The characters describing beef, noodles, and soup, are easy to remember, and so it isn't hard to order what you want. After a while, you learn to recognise other things pretty quickly too. I'm also a fan of noodles with the other commonly featured meats, pork, chicken, etc, (those two are lighter and work very well as a late breakfast), but the beef is my favourite for dinner, with its darker and denser texture. 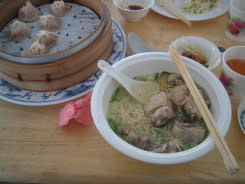 One thing that I like a lot about the whole food culture there is the variety and/or serendipity you can get between different places. The beef noodles you get a couple of doors down might be rather different from the ones you got at that other place. It's definitely the same dish, and no less delicious.....just different. I like that...it's a sort of jazz culture brought to food. You have your standards, and everybody knows and loves them, but everybody plays them differently. Everywhere you go, especially at night, you're likely to pass some sort of food-preparation activity:

I did not stop to see what that was, but they looked like they were having a lot of fun preparing it. 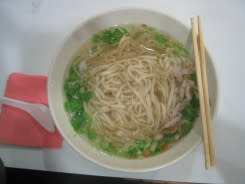 Just in case you're perching there waiting to see if I'm going to commit some new crime of cultural insensitivity (see the comment stream of my post on traffic), I'd like to point out that in taking my photographs I was very careful to (1) not disturb anyone by standing in their way, using flash, or disrupting their business in any way (2) linger only a very short time to snap (I prepare the shot beforehand, camera comes out and snaps and goes back in before anyone notices (3) ask permission -often after buying some food- in the cases where I cannot avoid being spotted. So hopefully I've nipped those complaints in the bud. 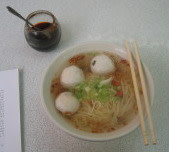 One cold rainy** morning in Taipei I was looking for breakfast and one of my favourite places that sells a particularly delicate pork dumpling noodle dish was not open yet. The place I found at the end of my folding bike hunt. Thrown a bit by this unexpected situation, I wandered some new alleyways and found an interesting sight. There were two women with three wooden drums from 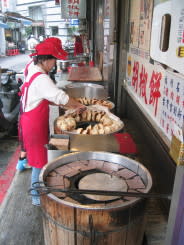 which they were extracting some very tasty -looking buns, no doubt filled (as they almost always are) with some sort of delicious thing. (The drums have hot burning coals in them, which cook and keep the buns warm, and give them a delicious hint of wood-smoke to their flavour.) I bought two one beef, one chicken, and then went to this cafe I love to go to for pearl tea -that's a milky tea with large black tapioca balls living at the bottom - deee-licious!! I took them all back to my room (along with a few other things) and they did not last long as I sat and watched the rain**. 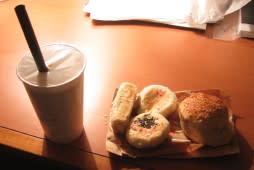 Guess what I did the day after I returned from Taiwan? I went to Chinatown to try to find a supermarket that could sell me ingredients to try to reproduce a good bowl of beef noodles. This being LA, you can find many things quite readily, so my trip was not without success. I'll tell you about the results some other time. -cvj **I do hope that I don't get accused of Western insensitivity for daring to mention the slight negative that it rains there, and can be relatively cold.