The Solar System is a-Changing 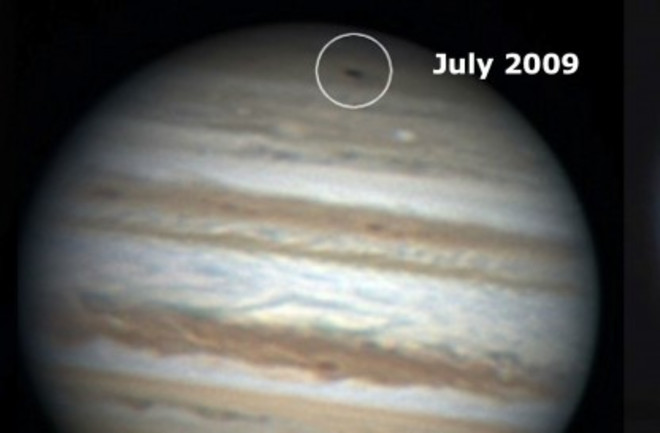 Three of the five impacts observed on Jupiter over the past 22 years: Comet Shoemaker-Levy 9 left a series of huge blemishes (left). The less celebrated 2009 strike created scars of its own (middle). Two weeks ago, Gerrit Kernbauer of Austria caught an impact in the act (right). Credit: ESA/NASA/STScI; Anthony Wesley; Gerrit Kernbauer.

When I was a kid and got hooked on astronomy (sometime around age 7), one of the things I deeply enjoyed about the night sky was its constancy. The human world is full of unwanted variables: Families move, friends get into fights with you, bicycles crash, birthday parties don’t turn out the way you wanted…but all you have to do is look up and you can make contact with another realm that never produces such disappointments. The stars are always in the same places. The planets slide around in the sky, but they don’t really change. Every time you see Jupiter, it is the same old reliable Jupiter.

Except that it isn’t. The closer you look at the solar system, the more you see change happening, and on all time scales. The constancy was an illusion, created by humans (not just my younger self!) watching the sky too erratically and too impatiently to see what is really going on. Jupiter is not always the same old Jupiter, as is abundantly clear from amateur video showing the planet getting whacked by a small asteroid or comet on the night of March 17. Watch other worlds and you’ll see the same thing happening. Wait longer–quite long by human standards, but very short in astronomical terms–and some really weird, extreme events unfold.

But I’m getting ahead of myself here.

The shooting gallery. Even as a child I understood that there were some rule-breakers. Meteors are ephemeral, and comets come and go. Mars has seasons; Jupiter’s stormy red spot moves around and varies in color. As the years went by, astronomers became increasingly aware of the role of comets and asteroids in an ongoing, more intense reshaping of the solar system. Jupiter was once again the great planetary showcase: In 1992, its gravity shattered Comet Shoemaker-Levy 9 and then two years later, in July 1994, the 21 cometary fragments slammed into the giant planet.

The effects were dramatic, as multiple enormous blemishes appeared atop Jupiter’s banded clouds. Worldwide observations of the event provided a bonanza of scientific information about comet impacts; they also delivered an utter affront to the notion of constancy in the solar system.

The collision of Shoemaker-Levy 9 was the first direct observation of a major solar system impact, but hardly the last. Amateur astronomers have since observed five more impacts on Jupiter, though none of these were predicted in advance so they were not studied with anything like the detail of the 1994 fireworks. Flashes of light from these celestial disruptions appeared in 2009, twice in 2010, in 2012, and now in the intriguing observations from two weeks ago.

It’s safe to assume that impacts like these have been occurring all along, just without anyone noticing. It’s also safe to assume that the actual frequency of hits is quite a bit higher than what’s been documented, since nobody would see impacts that occur on the farside of the planet, or ones that simply happen to occur during daylight hours in the locations where most amateur astronomers are looking.

A new 110-foot crater appeared on the moon on September 11, 2013. The Moon Impacts Detection and Analysis System picked up the flash of impact. (Credit: NASA/GSFC/Arizona State University)

Naturally, impacts are happening all the time on other worlds as well. And now we have the tools and techniques to see them. NASA’s Automated Lunar and Meteor Observatory has recorded hundreds of flashes from the impact of large meteoroids on the moon (“large” in this context means a few ounces or more, sometimes much more). These strikes can produce easily visible craters, as shown above. Unlike the scarring on Jupiter’s clouds, such changes are essentially permanent. Even a small lunar crater should remain evident for millions of years, if not billions.

The sizable fleet of spacecraft constantly observing Mars means that scientists now have the tools to notice fresh impact there, too. As a result, we can see the Red Planet transforming right before our eyes. More than 400 new craters have been recorded, mostly over the past decade; a major impact in 2012 produced a 150-foot pit, landslides, and a 5-mile-wide zone of debris.

Bigger bangs. All of the changes I’ve described so far, dramatic as they may be, still don’t fundamentally alter the appearance of the solar system. A more pockmarked Mars still looks like the Mars we know, and on the timescale of a single lifetime my original sense of permanence is still reasonably accurate. But if you keep running the clock, even that kind of reliability vanishes.

What if Mars was surrounded by rings, like the rings of Saturn? That would certainly be a stunning change to the landscape of our planetary neighborhood. And it’s really going to happen, in approximately 20 million years. The planet’s inner moon, Phobos, is on an inward-spiraling trajectory. Eventually it will come so close that Mars’s gravity will shred it into rubble, which will spread out into rings as massive as the ones around Saturn. The rings of Mars might persist for a few hundred million years, and they should make a lovely sight for future generations.

Presenting Mars circa 20 million AD, when its moon Phobos will have broken up into rings. (Credit: Tushar Mittal/Celestia Development Team)

Presenting Mars circa 20 million AD, when its moon Phobos will have broken up into rings. (Credit: Tushar Mittal/Celestia Development Team)

And what if Saturn didn’t have those dramatic rings? That may have been the case not so long ago. According to a provocative new model, the entire ring system, along with the currently existing inner satellites of Saturn, are less than 100 million years old–just 2 percent the age of the solar system. If we had lived at the time of the dinosaurs, we would have peered through our telescopes at a ringless Saturn, a rather drab yellow ball.

My modern self finds the idea of continual celestial evolution exciting to contemplate. But a little part of my 7-year-old self persists, mourning for a constancy that does not really exist anywhere, not even in space.