The Science of Yogurt

Yogurt is an ancient food that has been around for several millennia. One theory of the discovery of yogurt is that during 10,000 – 5,000 BC, when Herdsmen began the practice of milking their animals, they stored their milk in bags made of the intestinal gut of the animals. The intestines contain natural enzymes that cause the milk to curdle and sour. The herdsmen noticed that this method of storing milk extends its shelf life and preserves it. When they consumed the fermented milk, they enjoyed it and so they continued making it. Whether or not this theory is true, the consumption of fermented milk has survived into modern times, and spread throughout the world. The word “yogurt” is believed to have come from the Turkish word “yogurmak,” which means to thicken coagulate, or curdle. Today, the FDA defines yogurt as a milk product fermented by two bacterial strains: a lactic acid producing bacteria: Lactobacillus bulgaricus and Streptococcus thermophiles. 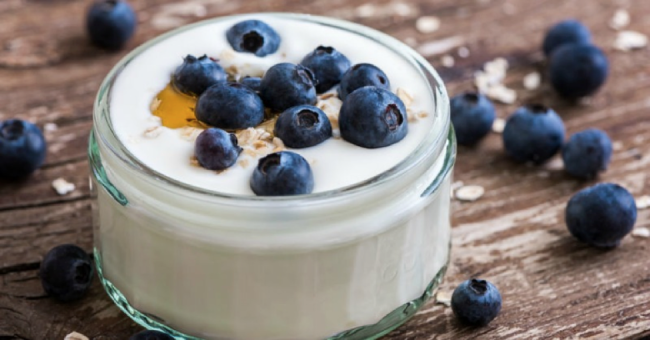 To make yogurt, milk is first heated to 180 degrees Fahrenheit for 30 minutes to denature the whey proteins; this allows the proteins to form a more stable gel. The yogurt is pasteurized before adding the cultures. The pasteurization process kills any pathogens that can spoil milk as well as to eliminate potential competitors of the active cultures. After milk pasteurization, the milk is cooled down to 108 degrees Fahrenheit, the temperature for optimal growth of yogurt starter cultures. Last, the yogurt starter cultures (probiotics) is added into the cooled milk and incubated until a pH of below 5 is obtained. This is called the fermentation process, whereby lactose in the milk is converted to lactic acid, which lowers the pH. When the pH drops below pH 5, micelles of caseins, which are amphiphilic proteins, loses its tertiary structure due to the protonation of its amino acid residues. The denatured casein proteins reassemble by interacting with other casein proteins, and these intermolecular interactions result in a network of molecules that provides the semisolid texture of yogurt (Zourari, Accolas, &amp; Desmazeaud).

The fermentation process is also essential for the tangy flavor of yogurt: the production of lactic acid by Lactobacillus bulgaricus imparts a sour acidic and refreshing taste. A mixture of various carbonyl compounds like acetone, diacetyl and acetaldehyde are also major contributors to the tarty yogurt flavor. Yogurt has a high concentration of acetaldehyde due to the low utilization of this metabolite by yogurt bacteria, which lack alcohol dehydrogenase, the main enzyme needed to convert acetaldehyde into ethanol (Lees, G. J., and G. R. Jago). During fermentation, acetaldehyde is produced directly from lactose metabolism as a result of pyruvate decarboxylation. However, lactic acid bacteria also have alternative metabolic pathways that can produce acetaldehyde (Figure 1):

Yogurt may provide potential health benefits by enhancing nutrient absorption and digestion (Fernandez). However, most commercialized yogurts that are sold in grocery stores contain added sugars, artificial ingredients and fillers, and only a marginal amount of probiotics. (Mercola). Homemade yogurt is an excellent way of getting probiotics into your system without the unnecessary chemicals and flavorings found in commercialized yogurts. All you need is a high quality starter culture and milk! Epicurious‘ step by step on how you can make yogurt at home can help you get started. Or you can check out The White Moustache, the website of Homa Dashtaki, a guest lecturer during the Spring 2017 Science and Food undergraduate course.

Fernandez, M. A., and A. Marette. “Potential Health Benefits of Combining Yogurt and Fruits Based on Their Probiotic and Prebiotic Properties.” Advances in nutrition (Bethesda, Md.). U.S. National Library of Medicine, 17 Jan. 2017. Web. 03 July 2017.