The Science of Why We Deny Science: Motivated Reasoning

Over at Mother Jones, I have a major feature story 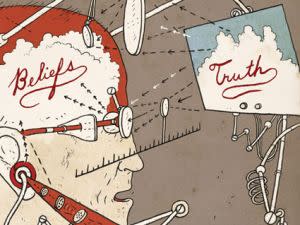 that just went up about the psychology of science denial--and, indeed, denial in general. In it, I unpack a theory called "motivated reasoning," which political psychologists have used to explain all manner of divides over factual, resolvable issues. Motivated reasoning is, in many ways, the updated, neuroscience infused version of "cognitive dissonance":

The theory of motivated reasoning builds on a key insight of modern neuroscience (PDF): Reasoning is actually suffused with emotion (or what researchers often call "affect"). Not only are the two inseparable, but our positive or negative feelings about people, things, and ideas arise much more rapidly than our conscious thoughts, in a matter of milliseconds—fast enough to detect with an EEG device, but long before we're aware of it. That shouldn't be surprising: Evolution required us to react very quickly to stimuli in our environment. It's a "basic human survival skill," explains political scientist Arthur Lupia of the University of Michigan. We push threatening information away; we pull friendly information close. We apply fight-or-flight reflexes not only to predators, but to data itself. We're not driven only by emotions, of course—we also reason, deliberate. But reasoning comes later, works slower—and even then, it doesn't take place in an emotional vacuum. Rather, our quick-fire emotions can set us on a course of thinking that's highly biased, especially on topics we care a great deal about. Consider a person who has heard about a scientific discovery that deeply challenges her belief in divine creation—a new hominid, say, that confirms our evolutionary origins. What happens next, explains political scientist Charles Taber of Stony Brook University, is a subconscious negative response to the new information—and that response, in turn, guides the type of memories and associations formed in the conscious mind. "They retrieve thoughts that are consistent with their previous beliefs," says Taber, "and that will lead them to build an argument and challenge what they're hearing." In other words, when we think we're reasoning, we may instead be rationalizing. Or to use an analogy offered by University of Virginia psychologist Jonathan Haidt: We may think we're being scientists, but we're actually being lawyers (PDF). Our "reasoning" is a means to a predetermined end—winning our "case"—and is shot through with biases. They include "confirmation bias," in which we give greater heed to evidence and arguments that bolster our beliefs, and "disconfirmation bias," in which we expend disproportionate energy trying to debunk or refute views and arguments that we find uncongenial.

I then apply the theory to climate denial, vaccine denial, creationism, and much else--including the persistence of political misinformation, such as the belief that Iraq had weapons of mass destruction. Again, you can read the Mother JOnes piece here. I'll have much more to say about it soon. I also unpack the implications a bit further over at DeSmogBlog.