The Revolutionary Rocket That Could Shuttle Humans to Mars 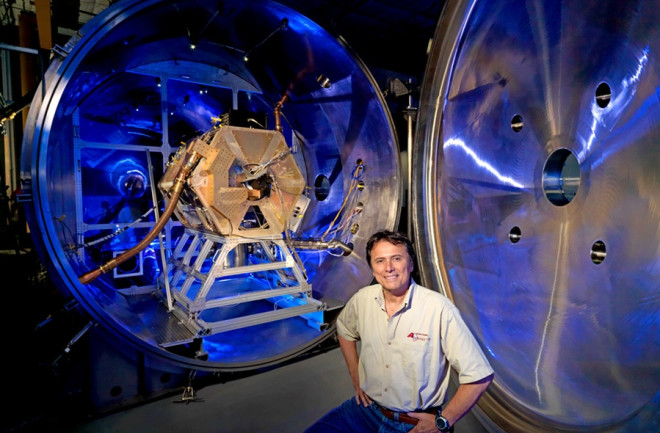 Franklin Chang Díaz with the rocket engine he designed, the VASIMR. Robert Markowitz and Bill Stafford/JSC/NASA

Traveling to Mars is not easy, which may be why no one has ever tried. It would take a good six to nine months to get there with today’s chemical-fueled rockets. Along the way, according to a 2013 study, you’d get dosed with the radiation equivalent of a whole-body CT scan every five to six days, increasing your lifetime cancer risk above the limits set by NASA. Upon reaching the Red Planet, you’d wait up to two years for Earth and Mars to be at their closest before your return trip, which would last another six to nine months. If the cosmic rays didn’t get you, the long layover might.

But what if there were a better way — a new kind of rocket that could transport you to Mars in less than six weeks? It would drastically cut both travel time and radiation exposure, and instead of three years, the entire round-trip flight could theoretically last just three months. This isn’t mere sci-fi speculation: In a nondescript warehouse in Webster, Texas, a forward-thinking scientist is developing a prototype rocket engine that could make space travel faster than ever before.

Franklin Chang Díaz, an MIT-trained physicist and former NASA astronaut, has spent more than 30 years tinkering with the rocket engine he invented, which he believes can transform interplanetary flight. In 2005, he founded a company, Ad Astra (Latin for “to the stars”), to pursue that goal, and he remains an unabashed advocate of space exploration. “The first person that is going to walk on Mars has already been born,” he says. And he hopes they’ll use his rocket to get there.

Chang Díaz during his astronaut days in 1998. NASA

Birth of a Revolution

Growing up in Costa Rica, Chang Díaz became fascinated with all things space in 1957, when the Soviets successfully launched Sputnik, the first artificial satellite. He was 7 years old. Eleven years later, he secured a one-way plane ticket to the United States and arrived in Hartford, Conn., with just $50 in his pocket. He barely knew a word of English. He stayed there with distant relatives to attend high school. After earning an undergraduate degree from the University of Connecticut, Chang Díaz enrolled as a graduate student in applied plasma physics at MIT, where he began research in nuclear fusion. The goal of this program was to develop a new energy source, but he had a different application in mind. “I always thought that nuclear power was going to be critical in exploring space,” he says.

The approach he pursued used powerful magnets to pack a superheated gas, or plasma, into a volume so tiny that some of the gas atoms’ nuclei would fuse together, resulting in a dramatic energy release. One of his main achievements was inventing a “magnetic nozzle” that could spray the plasma particles in a high-speed jet. It worked like the nozzle on a garden hose, except his version was invisible, regulating the flow of ions with magnetic fields.

While he was doing this work, Chang Díaz’s thoughts again returned to space, and he realized the same general idea could work in a rocket engine. Whereas rockets usually burn fuel to achieve propulsion, his approach wouldn’t involve burning anything. Instead, electricity would heat a gas such as argon to temperatures close to that of the sun’s surface until the gas turned into plasma. The plasma would be confined by a strong magnetic field (no materials could withstand these temperatures) and blasted out of the engine at high speed. Even though you’d still need a conventional chemical rocket to reach space from the ground, once there this engine could generate enough thrust to get people to Mars three to four times as fast as a traditional spacecraft — within 39 days, under the most favorable conditions. The idea of the Variable Specific Impulse Magnetoplasma Rocket — or VASIMR — was thus born.

To Texas, and Beyond

After receiving his doctorate degree in 1977, Chang Díaz continued to investigate his rocket concept, while maintaining his interest in space itself. He was accepted as a NASA astronaut, on his second try, in 1980. When his training at the Johnson Space Center in Houston got serious, he found it difficult to keep up the monthly commute to MIT, so he moved his rocket laboratory to Johnson. He went on to fly seven shuttle missions, logging more than 1,600 hours in space over the next few decades, all while maintaining an active research schedule, devoting time almost every day to work on his rocket engine.

Chang Díaz retired from NASA in 2005 to form Ad Astra, his rocket company. By then, the space shuttle program had only a few years left, and Chang Díaz figured it was time to move on to something new. He believed the next chapter of exploration, involving deep space travel, would require “a quantum leap in technology.”

That’s what he’s doing at his company’s unassuming headquarters in the Houston suburb of Webster, just a few miles from Johnson. He’s engaged in a friendly competition with his former employer, trying to create the rocket of the future.

Ad Astra’s 20-foot-high structure is tucked behind a Japanese restaurant and flanked by a Brazilian steakhouse and a tattoo parlor. Its drab, gray facade blends in with the parking lot around it. The building’s interior looks like typical open-plan office space — until you pass through a set of double doors and enter the laboratory. That’s where you might notice something out of the ordinary: a metal cylinder, 15 feet in diameter and 35 feet long, big enough to drive a school bus into. The cylinder is a vacuum chamber that simulates conditions in space. Inside lies a smaller vacuum chamber — about the size of an MRI machine — that contains the rocket’s magnets.

Runs of this novel engine happen several hundred times a day during testing. Argon gas is blown into the vacuum chamber, where radio waves heat the gas to 1 million or 2 million kelvins — an advantage since higher temperatures lead to greater efficiency. (By contrast, conventional rockets run at temperatures of a few thousand kelvins.) Magnets inside the inner chamber then funnel that hot gas into a focused beam, shooting outward at speeds exceeding 100,000 mph — a forceful discharge that would send a spacecraft speeding in the opposite direction.

The progress has been incremental, though steady. The engine recently produced an output of more than 200 kilowatts, an order of magnitude above previous technology, making it “by far the world’s most powerful plasma rocket,” Chang Díaz says.

Plasma is the less familiar fourth phase of matter, in addition to solid, liquid and gas. This superheated material, made of charged particles called ions, behaves like a gas but also responds to electromagnetism. It often produces a distinctive glow, as seen in lightning bolts, neon lights and plasma globes (above).

Webster, We Have a Problem

The biggest stumbling block VASIMR faces, as Chang Díaz readily acknowledges, is that even once it is scaled up to operate in the tens-of-megawatts range, which would be required to overtake traditional rockets in long-distance travel, it’s still just an engine that doesn’t run on fuel. That means it has to be hooked up to an electrical generator of some sort. And the only thing that’s compact and concentrated enough to supply a spacecraft with tens of megawatts of electricity (enough to power about 10,000 homes) is a lightweight nuclear fission reactor — something that does not yet exist.

Chang Díaz sees this as a temporary hurdle, not a showstopper. Patrick McDaniel, a nuclear engineer and space expert based at the University of New Mexico, agrees, saying engineers have the technological capacity to build a 10-megawatt nuclear reactor for space that’s “reasonably light,” though the will to do so may be lacking. That’s why the idea of a junket to the Red Planet is so appealing, he says. “We need a space mission to drive the development of a nuclear rocket, and a manned mission to Mars would be the perfect one.”

Chang Díaz is likewise confident the necessary advances in nuclear reactor design will happen. “Humans won’t go anywhere in deep space without this,” he says. “The only way to generate enough power is through these kinds of nuclear reactors.”

Ad Astra is developing the Aurora platform, a vehicle that makes use of a VASIMR engine, for the International Space Station. Used under license with Ad Astra Rocket Co.

In the meantime, Chang Díaz doesn’t need nuclear power to continue the development of his singular engine. “We will deploy VASIMR as a solar-powered rocket that can engage in a number of important near-Earth activities,” he says.

VASIMR’s first test in space is tentatively set for 2016 aboard the International Space Station. Instead of nuclear power, the engine will rely on bursts of power from large battery packs charged by the station’s solar panels. Assuming all goes well, Chang Díaz says, Ad Astra will then pursue multiple near-term applications of VASIMR, such as periodically nudging the space station and other large satellites into stable orbits.

Chang Díaz also wants VASIMR, in its interim role, to become a “space tug” that could power the rockets that haul provisions to space stations and carry satellites to their designated orbits. In other words, he says, “we want to get into the trucking business.” His rocket could also serve as a garbage truck, getting dead satellites and discarded upper-rocket stages out of their dangerous orbits around our planet (a job the larger chemical-fueled rockets can’t perform efficiently because they use too much fuel).

Such intricate tasks, requiring about 200 kilowatts of power, are anything but make-work. “They will tell us what we need to know to build rocket engines that can handle megawatts of power,” says applied physicist Tim Glover, a board member and co-founder of Ad Astra. “It’s a step we can’t skip.”

When VASIMR’s engine technology matures and lighter nuclear reactors are ready for spaceflight, the time will come for people to move beyond Earth’s orbit, with Mars being the logical next stop. Chang Díaz regards a trip of this sort as more than just another adventure. The exploration of space, he says, is essential for the survival of humanity — the latest step in a process that’s been underway since early humans first began to search the world around them.

Eventually, humans will almost certainly venture deeper into the solar system, moving farther away from the pale blue dot we call home. As Chang Díaz sees it, “Mars is just the beginning.”

[This article originally appeared in print as "Rocketman."]