The Race to Proxima Centauri (Part 1) 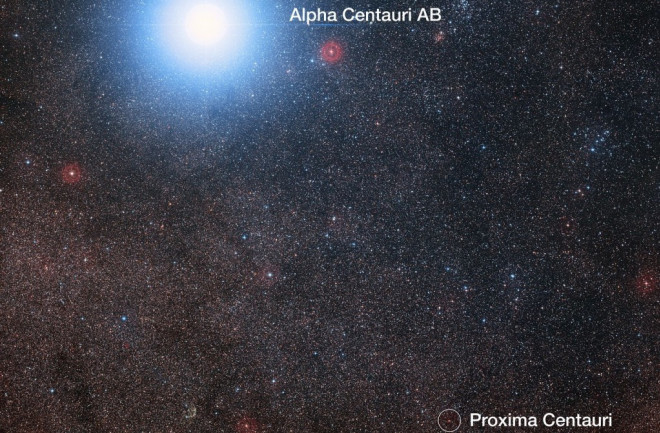 An invisible planet orbiting the pale red dot of Proxima Centauri (seen here alongside its much brighter neighbors, Alpha Centauri A & B) may be the key to understanding Earthlike planets across our galaxy. (Credit: Digitized Sky Survey 2)

Sometimes it takes a while for the meaning of a new scientific discovery to really sink in. In the case of the planet Proxima Centauri b, announced last week, it may take decades or even centuries to fully grasp the importance of what we have found. You see, this is not just any planet: It is similar to Earth in mass, and it orbits its star in the "habitable zone," where temperatures could potentially allow the existence of Earthlike bodies of liquid water. Proxima Centauri is not just any star, either: It is the very nearest one after the Sun, and it is a small red orb whose feeble light makes it relatively easy to study the planet close beside it.

The science at stake here is enormous. Proxima Centauri b will surely become the archetype for understanding more distant Earth-size, and possibly Earth-like, planets all across our galaxy. The effort needed to study it will be enormous, too, however. At present the planet cannot even be glimpsed directly through the mightiest telescopes on Earth. Nevertheless, the race is on--a thrilling but maddeningly slow-motion race to bring Proxima Centauri into view, to figure out if it could (or does!) support life, even to visit it with an interstellar probe.

That last goal is the most ambitious; some might call it the most absurd. But the discovery of Proxima Centauri b comes at a propitious time, just as a group of physicists and engineers have been thinking very realistically about how to send a space probe to another star, and to do it within a single human lifetime. The resulting Breakthrough Starshot concept would use an array of extremely high-power lasers to shoot a beam at a huge, extremely thin reflective sail. Energy from the beam would accelerate the sail (and a miniature probe attached to it) to 1/5 the speed of light, more than 1,000 times faster than anything humans have yet achieved.

Breakthrough Starshot concept would use a giant Earth-based laser array to accelerate a space sail to a significant fraction of the speed of light. Destination: Proxima Centauri b? (Credit: Breakthrough Initiatives)

I worked with Philip Lubin of the University of California at Santa Barbara to develop a popular-level summary of how the Starshot would work. You can read about it here. If you want to dig into the more technical details of the project, Lubin also has a much longer paper posted online. This proposal envisions technology beyond what is available today, but there are no science-fiction elements in it. No warp drive, no wormholes. It is a straight extrapolation from things we know and do right now, just executed on a vastly greater scale—which is broadly similar to where the idea of going to the moon was around 1950.

In other words, we don't know how to build a Starshot yet, but at least we know where to start. If we invested seriously in the project—on the order of $20 billion total, more than the Large Hadron Collider but far less than the International Space Station—and got started right away, Lubin and other researchers guesstimate that we could have the technology ready in three decades. I'll be more conservative and add another two decades to allow for all the full suite of components: In addition to the phased laser array you need the the energy-collecting sails, the probes themselves, and a "mothership" to carry them into orbit before interstellar launch. Just this week, a group of Starshot planners met at Moffett Field in California to hash out some of the details.

Lubin suggests that the a laser-accelerated lightsail could reach 0.25c (that is, 25 percent the speed of light). The Breakthrough Starshot announcement similarly suggests a target velocity of 0.2c. I'll again be conservative--within this frame of crazy optimism, that is--and say that what is really possible is closer to 0.05c, or 5 percent the speed of light. That is still roughly 10,000 miles per second, a hugely ambitious goal. At that speed, sending probes to Proxima Centauri b would take approximately 85 years.

Notice, by the way, that I said probes. To make the Starshot work, you want to start with very small payloads, no larger than an iPhone and possibly a good deal smaller; the lighter the payload, the easier it is to accelerate to ultra-high velocity. A low-mass payload will necessarily have limited capabilities, probably a camera, a couple types of spectrometers, particle & magnetism detectors, and a laser communication system. When that probe reaches its destination, it will still be moving at 10,000 miles per second and will have no way to slow down. Your trip through the most interesting part of the Proxima Centauri system will happen very quickly, in a matter of hours, and you will have no way to steer toward planet b or any other specific targets.

Artist's impression of what Proxima Centauri b might look like. Nobody alive today will ever know if this scene is accurate, but a fast flyby view of the planet just might be possible within a human lifetime. (Credit: ESO/M. Kornmesser)

But there is a huge upside to the Starshot concept. Almost all of the cost goes into the laser system that launches your probe. The probe itself would be a tiny, solid-state device attached to a thin sail. If the probes were mass produced, the cost per launch might be just a few hundred thousand dollars. The Breakthrough Starshot team therefore envisions launching not one, but a swarm of thousands. Some of those probes would fail at launch; some would fail along the way; some would miss Proxima Centauri, or not pass close enough to interesting targets to get a good look. But it doesn’t matter; a 99 percent failure rate would still be a tremendous success. If you launch 1,000 probes, you need only a dozen to survive in order to achieve one of the most amazing missions of exploration in human history.

If you tally my numbers, you'll see that I envision the first probes reaching Proxima Centauri in about 135 years (and then you have to allow another 4.3 years for their signal to get back home). Using much more aggressive assumptions, Lubin suggests that we could get start receiving our first up-close reports on Proxima Centauri b around 2070. Either way it is a very long wait time to make sense of a new discovery, and that assumes both a sustained, focused effort and the successful resolution of a vast number of technical challenges. Fortunately, this race passes a lot of milestones that are much closer and easier to reach. Even in its early stages, laser-sail technology would be useful for high-speed exploration through the solar system, or for deflecting and maneuvering asteroids. More to the point, there is a whole other race to Proxima Centauri--one that does not require high-power lasers and interstellar travel, one that is underway right now. I'll talk more about that in my next post. For the latest science and technology news, follow me on Twitter: @coreyspowell