The Politics Behind Choosing a Mars 2020 Landing Site 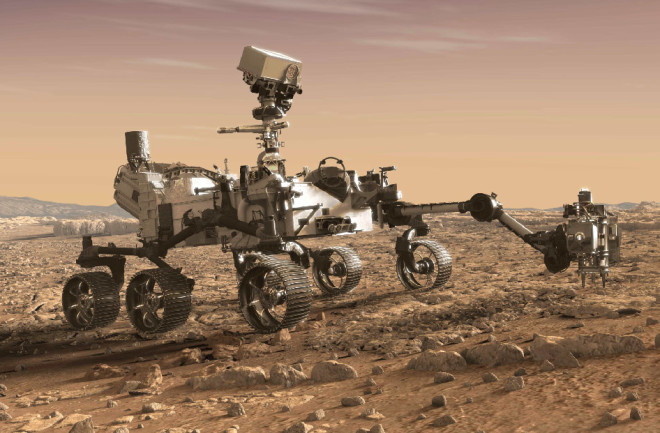 Scientists are debating landing sites for NASA's Mars 2020 rover, which will look for signs of life on the Red Planet. (Credit: NASA/JPL-Caltech)

Battle lines are being drawn on the Red Planet. Last week, more than 200 scientists from around the globe gathered in Los Angeles to debate the best place to send NASA’s Mars 2020 rover. The choice of landing site will steer the direction of Mars research for the next several decades.

Similar in design to Curiosity, the as-yet-unnamed rover is being outfitted with state-of-the-art instrumentation and the ability to drill rock samples.

The rover will stash these samples in a safe place on Mars until they can be retrieved by a future mission. When the samples return to Earth — years or maybe decades in the future — scientists hope to find biosignatures, or signs of ancient life. All told, NASA hopes to bring back a set of rocks the size of a few boxes of chalk. Since the second mission is not guaranteed, each scientist at the meeting was forced to weigh the odds of return when casting their vote.

“Make no mistake, the reason we are going to Mars in 2020 is because we want samples back,” said Thomas Zurbuchen, NASA’s associate administrator, who was a surprise guest on the final day of the workshop. “I think that those samples have answers to those questions that keep us up at night.”

The four landing sites debated at the Mars 2020 meeting were the culmination of years of scientific study and arguments. The advocates for each potential site are sure that theirs is the best option for revealing biosignatures. Columbia Hills — previously known as Gusev Crater, the landing site for the Spirit rover — holds signs of hydrothermal vents similar to those on Earth, which are havens for microbial activity. Jezero Crater bears signatures of an ancient lake and river delta. Northeast Syrtis comprises some of the oldest rocks on Mars — those formed when the planet may have had a more hospitable climate. The final site, Midway, is located between Jezero and Syrtis and could offer the best of both worlds.

Although Columbia Hills scored poorly at the previous landing site workshop, NASA’s sample return steering committee thought the potential of finding biosignatures there merited its inclusion in the final process. “We are told over and over again, the vote is not binding,” said Steve Ruff, a professor at Arizona State University. “It’s simply input into the process.”

Ruff was on that steering committee, and he started the conversation about Columbia Hills that got it included in the final set of landing sites. He was seen sporting an “I (heart) Columbia Hills” button throughout the week.

The region used to be referred to as Gusev Crater – and the crater’s name hasn’t changed. But Ruff says changing the landing site’s name to Columbia Hills was a strategic rebrand. Since Spirit already traversed Gusev Crater, scientists thought spending an estimated $2 billion to return — when so much of the planet is still unexplored — might not sit well with a public hungry for new discovery. So last year, the site’s most ardent supporters — Ruff included — decided to call the Gusev landing site by another name — Columbia Hills, for the nearby mountains.

The new name hasn’t entirely caught on, though, with most at the meeting still using the two terms interchangeably. Many of those present believed this renaming to be politically motivated — a ploy to curry favor for one’s preferred site. For a scientist who has built their career studying a particular spot, the desire to gather more data and delve further into the mysteries of that site is strong.

Despite the skepticism from many at the meeting, Ruff remains optimistic about the site’s chances in the final selection, and thought his team’s presentations had swayed some undecided voters. “We came in with a solid scientific case,” he said.

Ray Arvidsen, a professor of planetary geology at Washington University in St. Louis, was one of the deputy principal investigators on the Spirit mission, but is hesitant to return. “Gusev seems to be incremental progress,” said Arvidsen. “The broader issue of learning more about Mars is best served by another site.”

One solution could be to have the Mars 2020 rover drive from one potential landing site toward another favorite. (Credit: NASA/JPL-Caltech)

One solution could be to have the Mars 2020 rover drive from one potential landing site toward another favorite. (Credit: NASA/JPL-Caltech)

To the outsider, the whole workshop may have seemed antagonistic at times, but the participants didn’t see it that way. “The intense-seeming discussion comes from a place of excitement,” said Tim Goudge, a postdoctoral fellow at the University of Texas-Austin. “It’s a sign of a healthy scientific community.”

All of the scientists interviewed for this story agreed that the process — regardless of outcome — was important. After two and a half days of arguments, workshop attendees cast their votes. The highest-ranked option was a hybrid mission that will traverse the 28 kilometers between Jezero and Midway and collect samples in both places. While Spirit only traveled 7.73 km, Opportunity made it over 45 km before NASA lost contact earlier this year. While both of those rovers were solar-powered, Mars 2020, like Curiosity, will be carrying its own fuel in the form of radioactive plutonium, elongating its potential lifetime.

The recommendations of the community and the scientific committee will go up the chain to NASA, which is expected to make a final announcement on the landing site by the end of the year. The new mission couldn’t come at a better time for Mars scientists, with Opportunity incommunicado since planetwide dust storms struck Mars in June. Curiosity is still going strong, but is already more than 1,500 days beyond its 668-day lifespan.

“It’s a huge service to the community to hold these workshops,” said Goudge. “But I’m not jealous of the ones making that decision.”

By the time the rover lands on Mars in February 2021, all differences will be cast aside and the community will rally around the selected site. “Almost everyone here believes all of them are great,” said J.R. Skok, a research scientist at the SETI Institute. “Wherever NASA picks, everyone will fall in line because they want to be a part of it.”