The Physics of . . . Skipping Stones

The gravity-conquering grace of a well-thrown rock has inspired bomb makers, aircraft designers, and physicists—not to mention countless idle hands 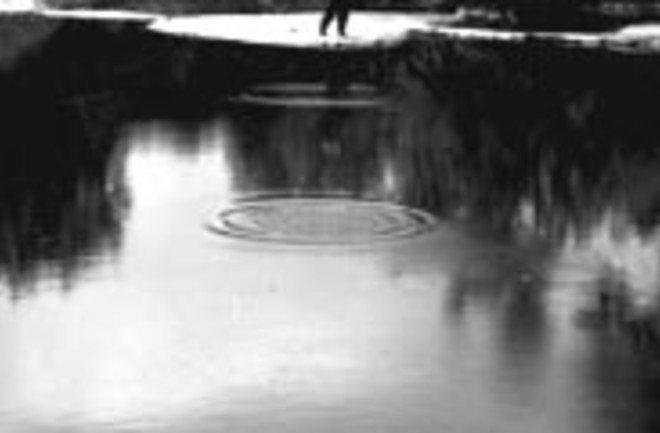 Champion stone skipper Jerdone Coleman McGhee has been stopped going through customs with bags full of rocks and always carries a five-sided stone in his pocket.

The night that Jerdone Coleman McGhee's life changed, he was standing on the shore of the Mediterranean Sea with a handful of rocks. For months he'd been strolling the slate beaches near Cadaqués, a Spanish town along the Costa Brava, hurling stones into the water in frustration over a failing relationship. As time went on, he started walking less and throwing more, the stones skipping farther and farther across the water. One evening, when the water was calm, one of his stones sailed out so far toward the setting sun that it seemed to go on forever. There was silence, then applause. When McGhee turned around, he saw that a crowd had gathered behind him.  McGhee has since earned the Guinness World Record for stone skipping: 38 bounces, filmed on the Blanco River in Texas in 1992. And although he makes his living traveling from oil field to oil field as a field engineer for Scientific Drilling International, he would rather be at home in Wimberley, Texas, looking for stones. In the nearly three decades since his epiphany in Spain, McGhee has conducted a systematic study of his peculiar skill, compiling the results in a book, The Secrets of Stone Skipping. He has tested stones of all shapes and sizes under different conditions, bounced stones in buckets of water, and advised students at MIT's Edgerton Center Strobe Project Lab about how to film them as they skip along.  The essential motion of a skipping stone was first described in 1968 by Kirston Koths, a student of chemistry at Amherst College. Koths photographed stones skipping across a sandbox, a tabletop covered in a blanket, and water. On the sand and the tabletop, he found, the stones struck with their trailing edge, then flipped forward to hit their leading edge, then took to the air again. On the water, the stones skidded along on their trailing edge, at a 75-degree angle to the surface, until a crest of water formed in front of them. Then they slid up and into the air to begin the process over again.  For more than 30 years, Koths's analysis was the last word in stone skipping. Then, in February, the American Journal of Physics published "a simplified description of the collisional process of the stone with water" by Lydéric Bocquet. Bocquet is a physicist at Claude Bernard Lyon University in Villeurbanne, France. He describes his work as "an entertaining exercise for undergraduate students," but his equations hardly make for light reading (see Figure 1). In layman's terms, Bocquet says, the effect "is really similar to waterskiing." With each skip, gravity pulls the stone deeper under the surface, and the water exerts more drag on the stone. Eventually, the drag becomes so great that the stone can't break free. A skipping stone spends 100 times longer in the air than it does on water, but air is 1,000 times less dense than water, so its effect on the flight is relatively minimal.

The key to a good skip, Bocquet says, lies in spinning the stone. On the water, a stone's spin keeps it poised on its trailing edge, rather than somersaulting. In the air, spin provides stability, as with a Frisbee. If the thrower gets the stone off to a bad start, spin can bring it into better position before it hits the water.  Bocquet has developed a formula for estimating how many times a stone will skip based on spin and speed. He calculates, for instance, that for a stone to skip five times it has to spin five times per second; to skip 15 times (Bocquet's personal record), it has to spin almost nine times per second. According to this formula, McGhee's world record-setting throw was spinning nearly 14 times a second and moving at nearly 40 feet per second.  To achieve such results, McGhee starts by picking through piles of stones, turning each one over and feeling its weight. He sets the flattest-looking candidate in the crook of his pointer finger, curling his other fingers beneath it. Then he stands up straight, wrist cocked high above his head like a flamenco dancer with castanets. This stance used to be an oddity—most stone skippers crouched low to the water—but it's now widely imitated. Although McGhee starts with the stone held high, he releases it at his side, as parallel to the water as possible. "The more parallel you throw it, the less energy it uses to try to fly right," he says.  Stones that aren't perfectly shaped, and ones that have a little heft, seem to work best. Waves and gusts of air can send a light, nicely rounded stone off course. "You'd have a hard time skipping a cracker," McGhee says.  To those not gunning for a world record, stone skipping may seem like child's play, but the principles behind it have been put to serious use. During World War II, British engineer Sir Barnes Wallis, who often skipped rocks with his grandchildren, created "bouncing bombs" for the Royal Air Force. German dams were a vital military target, but they were protected from direct attack by anti-aircraft guns and from torpedoes by underwater nets. After experimenting with marbles, catapults, and tubs of water, Wallis developed cylindrical bombs that could be spun while airborne, then released to skip across the water. In May 1943, British bombers attacked the Möhne dam in Germany's Ruhr region. The first bomb detonated before reaching its target; the second hopped over the dam and destroyed the power station below it; the third veered to the left; and the fourth struck home, reaching the dam after three bounces.

According to physicist Lydéric Bocquet, the conditions for skipping depend on a stone's diameter (), velocity (), mass (), tilt (), angle of attack (), and the density of water ().

More recently, engineers at Lawrence Livermore National Laboratory have proposed the HyperSoar airplane, which would skip along Earth's upper atmosphere at five to 12 times the speed of sound. The plane would take off like a regular passenger plane, soar 25 miles above Earth, then kill its engines and drift up into space and slowly back down again. When it hit the denser air of the upper atmosphere, it would bounce back up like a stone hitting water. The pilot would then fire the engines again and send the plane back into space. Eighteen skips would be enough to get HyperSoar from Chicago to Rome in 72 minutes.  McGhee isn't surprised by that, but he doubts that mathematics will ever grasp what's involved in a truly great throw. When all goes just right, a stone seems to dance across the water forever, its skips almost too quick to count. "It's the most beautiful thing you've ever seen."  Stone Skipping 101  The secret to skipping is spin and speed, the world-record holder says, and careful attention to form

1.     Pick a smooth stone that fits in your palm, has a uniform thickness, and is neither too heavy nor too light. McGhee likes ones that are about as heavy as tennis balls. Rectangular stones will veer off at an angle; triangular stones are the most stable on choppy water. Irregular stones are McGhee's favorites.  2.     Stand at an angle to the water, your feet apart at shoulder width. Take a few warm-up throws with increasingly heavy stones. When you're ready, gather some stones and hold them in your non-throwing hand as a counterbalance. Then place one in the crook of your index finger and cock your wrist. 3.     Breathe in slowly through your nose, extending your arm high above your head. When your lungs are full, whip your non-throwing arm across your body, then bring your throwing arm down and forward, rotating your shoulders 180 degrees. Exhale forcefully as you throw, shifting your weight onto your lead foot.  4.     Snap your wrist at the end of its arc, releasing the stone parallel to the water with as much spin and speed as possible. If you are standing at the water's edge, your stone should first splash down no more than 15 feet away. Follow through with your throwing arm's motion after the stone is released.  Read a description of Roman shell skipping: www.earlychristianwritings.com/text/octavius.html. A short essay on the HyperSoar, "Bringing Hypersonic Flight Down to Earth," on the Lawrence Livermore Web site gives details of the plane's potential and the technical challenges of building it: www.llnl.gov/str/Carter.html. The North American Stone Skipping Association's Web site has links to relevant sites and a collection of stone-skipping trivia: www.yeeha.net/nassa/a1.html.