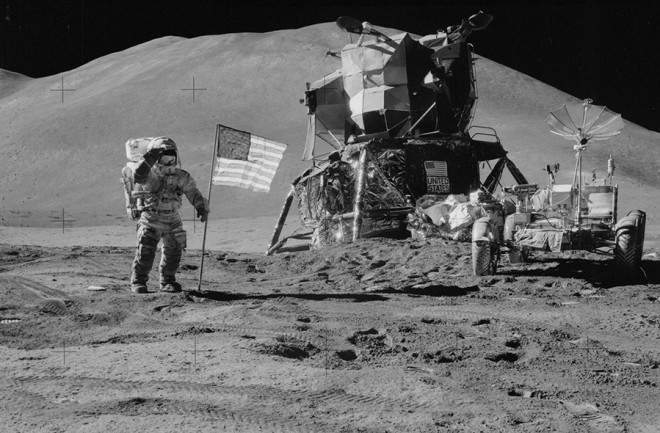 Seiichi Nagihara began to sweat as he dug through long-forgotten boxes in a cluttered basement storeroom at a Columbia University outpost in Palisades, N.Y. But the trim 54-year-old kept working. It was June 2013, and he had come all the way from Texas to search for decades-old clues about the moon.

Nagihara pawed through the yellowing files of Marcus Langseth, a Columbia geologist who died in 1997. Between the late 1960s and mid ’70s, Langseth was in charge of a project to study how heat escaped from the moon’s interior, using sensors deployed by astronauts during the Apollo missions. This experiment was just one part of the Apollo Lunar Surface Experiments Package (ALSEP), the only comprehensive set of moon-based studies humans have ever conducted.

Nagihara, a geophysicist at Texas Tech University, hoped to reanalyze Langseth’s heat data with modern analytical techniques on computers that scientists back then could only dream of. But as much as half of the ALSEP data had gone missing since Congress pulled the plug on the project’s funding in 1977.

Now, Nagihara and a band of researchers-turned-detectives are racing to recover the lost data before it’s too late. The last scientists who worked on the Apollo missions are aging fast, as are the fragile magnetic tapes on which the data were recorded and the machines that can read them.

Nagihara’s motivation to find the information is simple: We’re not going back to the moon anytime soon. “Until then,” he says, “that’s the only dataset we’ve got.”

Apollo 12 astronauts Charles “Pete” Conrad and Alan Bean installed the first set of ALSEP instruments on the moon in 1969. More followed on every mission (except Apollo 13), until the final moon landing in 1972. This equipment monitored the moon’s meager atmosphere, listened for the faint rumbles of moonquakes and asteroid impacts and measured lunar heat flow. All together, the 14 experiments operating across five landing sites threw open a window into the workings of our lonely natural satellite.

As the years wore on, some of the instruments winked out, but most outlasted their budget, and eventually the program lost support from Congress. In 1974, NASA began to dismantle ALSEP’s network of scientists and engineers, and in 1977, the agency shut down the range stations that received radio data from the lunar instruments.

After the project ended, much of the data got lost despite preservation efforts. For every experiment, NASA made copies of the data: The agency kept one version and sent the other to project scientists like Langseth. Most of the surviving ALSEP data comes from researchers, who processed the raw data and archived the results with NASA. However, many of these records end in 1974 and are often incomplete. Langseth’s contribution, for example, contained only what he needed for his work — one out of every seven measurements collected by the heat flow sensors, and no raw data.

That was fine, in principle, because NASA had backup copies of everything. However, scientists now cannot find most of these archival tapes. NASA records show they were sent to the National Archives, but the space agency withdrew most of them again in 1980. That’s where the paper trail ends. Yosio Nakamura, a retired geophysicist at the University of Texas at Austin who worked on ALSEP’s seismic experiments, suspects NASA recalled them for possible reuse during a tape shortage, then lost track of them.

Fortunately, data from the final years of the project survived intact, thanks largely to Nakamura. In 1976, as NASA was running out of money, researchers at the University of Texas at Galveston — where Nakamura worked at the time — took over the task of producing archival tapes. These remained at the university after ALSEP ended, although some thought they didn’t hold much value, Nakamura says. “Some people were saying, ‘Those are old data, they are of no use.’ ”

A seismic plot from an ALSEP experiment on the moon. NASA

Nakamura disagreed; he foresaw a day when future researchers could unlock new insights in the old data. So, in the early 1990s, he sought support from NASA to preserve the tapes he saved from Galveston. NASA, again citing a tight budget, turned him down, but the Japanese Aerospace Exploration Agency eventually gave Nakamura a grant to condense about 9,000 tapes into just 80 cassettes. These data, which include a full record of the passive seismic experiments as well as everything from the last 19 months of the project, remain the most complete record of raw ALSEP data in existence.

Without seeing the missing data, it’s impossible to say how valuable they might be. But the ALSEP data we do have offer some hints.

When lunar seismic data were first collected and analyzed in the 1970s, researchers like Nakamura interpreted them by eye, holding the jagged lines of seismograms over a light table. “During the mission, all we had was a big computer with 24 kilobytes of memory — a very small fraction of what you have on your cell phone,” Nakamura says.

Recently, he and other researchers have reanalyzed the data with great success. One of those researchers, Renee Weber, a lunar and planetary scientist at NASA’s Marshall Space Flight Center, detected hundreds of new moonquakes in the old data. She and her colleagues then studied how these quakes reverberated through the moon’s interior to probe its structure. In 2011, they published a paper in Science presenting a new look at the moon’s core.

Because no one has returned to the moon since the Apollo program, many young researchers like Weber began to seek out data for the other ALSEP experiments, only to realize how much was missing. But nobody made a serious effort to figure out what happened, or find the tapes, until Nagihara stumbled onto the mystery while searching for Langseth’s raw heat-flow data.

Fueled by curiosity and concern, he and two dozen other scientists officially formed the ALSEP Data Recovery Focus Group in 2010. NASA gave the group, chaired by Nagihara, its blessing and provided funds to help the team hunt down and archive the lost tapes, as well as make the existing ALSEP data more accessible to today’s researchers.

The recovery effort got off to a promising start. Just months after the group formed, Pamela Baker at the Johnson Space Center Records Office found paperwork that led to the discovery of 450 tapes at a national records center in Maryland. When Nagihara went to collect them, he was delighted to find that they were archival tapes containing a full record of ALSEP data for a three-month period in the spring of 1975.

But then the trail went cold. With no leads on the remaining 4,550 archival tapes, Nagihara tried to find some of the tapes NASA had sent to the project scientists for analysis — like the ones containing Langseth’s heat data — in hopes that they hadn’t been thrown out.

In addition to that dusty Columbia basement, he also visited the University of Maryland to scour the records of the late physicist Joseph Weber, who oversaw ALSEP’s gravimetry experiments.

Although he found some useful documentation, neither of those visits yielded any tapes. A recent tip from NASA’s Astromaterials Acquisition and Curation Office also proved to be a false alarm.

Now, Nagihara fears that time is running out. The tapes themselves are quickly degrading, as is the archaic equipment needed to extract the data.

“If we find more tapes 10 years from now,” he says, “we may not be able to read them. The clock is ticking.”