In my Top 14 Astronomy Pictures of 2010, I started off with a galaxy I called the Milky Way's fraternal twin; it looks a lot like ours, but has some differences that were worth pointing out. In one of those coincidences that makes me smile, only a few days later the folks at Hubble Space Telescope released another spiral galaxy image, and this one... well, it's a beauty: 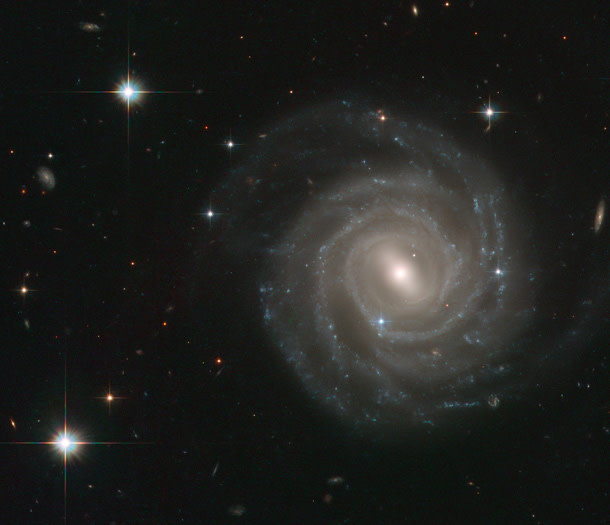 That's really something! It's so pretty I made it my desktop image. Click it to see it in all its 2800 x 2400 pixel galactaliciousness. 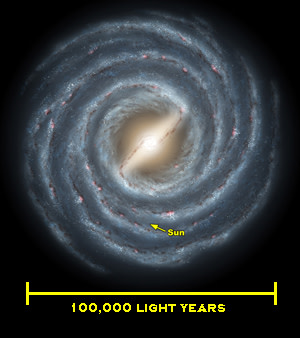 The name of this galaxy is UGC 12158. It's a face-on barred spiral; the bar refers to that rectangular block of stars in the center. Some spirals have a spheroidal central bulge, like Andromeda does, but quite a few have a bar-shaped hub. The Milky Way does, in fact, and observations using radio and infrared telescopes (able to pierce the dust obscuring our view) show that our bar is actually pretty hefty. The small picture here shows an illustration of the Milky Way based on these observations, and we think it's a pretty accurate representation. The resemblance to UGC 12158 is obvious. When I first saw this Hubble picture, I was impressed with the beauty of this galaxy I had never seen before. But then I realized something... Y'know, I have a lot of experience looking at Hubble images. I spent years working on them, and after a while you get a feel for them. It's just practice, and you get what almost feels like instinct about some things. So when I saw this picture and I got that odd (but familiar) feeling in my head, I knew to pursue it. It didn't take me more than a few seconds to nail it down: this galaxy is big. The size of the star images, the smoothness of the galaxy itself, the way the image feels... I just knew that this was no tiny galaxy. So I went to the release page for it, and when I saw the distance, I was shocked: that galaxy's not big, it's freaking huge. I figured it was part of the Virgo cluster, maybe, 60 million light years away or so. Nope: it's a whopping 400 million light years distant, which is a long, long haul. That was stunning to me; if it's that far away the galaxy really has to be a bruiser. So I grabbed a raw image from the Hubble archive and measured its size in pixels, which I could then convert to a spatial size given its distance. And I can still hardly accept this, but UGC 12158 is 140,000 light years across. I measured it twice, two different ways, to be sure. That's the biggest spiral I've ever heard of! Mind you, the Milky Way is in the top tier of galaxies in the entire Universe when it comes to size, but UGC 12158 whips us by a clean 40%! When I first saw the galaxy, I figured we might have the Milky Way's identical twin. Little did I know that it was actually our much, much bigger brother. The reason this image was taken was as part of a sequence of images of a supernova, a star that exploded in the galaxy. Called SN2004ef, you can see it as the bright blue star just below and to the left of the galaxy's center. Several images of the supernova and galaxy were taken by Hubble to monitor how the star faded with time; that tells astronomers quite a bit about the physics going on in the churning maelstrom of the explosion. One of the things I dearly love about astronomy: we get truly important and interesting science at the same time we get outstanding artistry and beauty. That's true in most fields of science, of course! And sure, maybe I'm biased... but it's really hard to beat a big, magnificent spiral galaxy.