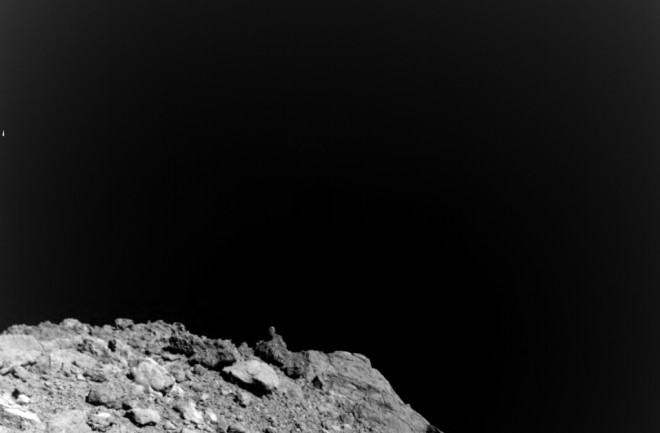 The image shows the first image acquired by the DLR-developed MASCAM camera system during Hayabusa2’s descent, shortly after separation from the landing module at a height of 41 meters. (Credit: Jaumann et al. 2019, Science)

The solar system is a crowded place. Earth may be the only planet with humans on it, but many worlds are home to robots — rovers and landers and orbiters, gathering data for astronomers. Asteroid (162173) Ryugu joined them last summer, and has been playing host to the Japanese spacecraft Hayabusa2. The mission has already collected lots of great data.

Now, according to a report Thursday in Science, we have some more information on the diamond-shaped Ryugu. Hayabusa2’s Mobile Asteroid Surface Scout (MASCOT) lander, which touched down last October, snapped several pics along the way. An international team of scientists analyzed them to gain new insights into the ancient world, helping them understand its violent past and even learning a little about the ancient solar system.

MASCOT’s descent onto Ryugu was surprisingly low tech: Hayabusa2, already in orbit, simply “let go” of the lander and let it fall to the surface. The hardy device, packed with a camera (named MASCam) and other instruments, tumbled down slowly, freefalling about 134 feet for roughly 6 minutes before landing with a thud. It bounced another 56 feet before finally coming to a rest.

This was all on purpose. The German Aerospace Center designed MASCOT for the rough journey, and it snapped photos the whole way. The lander also carried a spinning weight which could re-orient and even move the tiny craft, allowing it to gather data from various locations. And thanks to the tried and true methods of flash photography, the machine could even snap pics in the dark. After more than 17 hours, and a few more hops, MASCOT’s batteries died out and this part of the mission was complete.

This image shows that MASCOT moved turbulently towards Ryugu, as expected, performing turns and rollovers. The images show a huge boulder, which occupies the eastern (right) edge of the image and is several tens of meters in length. (Credit: Jaumann et al. 2019, Science)

Now, researchers have combined and analyzed the photos — along with data from Hayabusa2 — to carefully reconstruct MASCOT’s journey above and along the surface of Ryugu, allowing them to put close-up photos of the asteroid’s surface in context.

“The MASCam images acquired during descent and bouncing reveal a surface covered with rocks and boulders of different lithologies” or characteristics, the authors write. “Rocks appear either bright, with smooth faces and sharp edges, or dark, with a cauliflower-like, crumbly surface.” The distribution of both was pretty much even over all the areas MASCam captured.

The images also showed a marked lack of finer rocks, like dust or sand. Ryugu is pretty much just a collection of rocks and boulders, with nothing smaller currently on the surface.

These findings are telling. The dichotomy of rocks backs up previous ideas that Ryugu had a violent birth. Maybe, the authors suggest, the asteroid is the result of two parent bodies crashing into each other, explaining the two types of rocky materials strewn everywhere. Or, perhaps it formed from one body with drastically different internal temperature and pressure conditions, leading to a “catastrophic disruption and redistribution, also resulting in two types of material.”

This image was taken shortly after the first contact with the ground, just a few meters above the surface of Ryugu. Just as in the images from higher altitudes, no fine material, known as regolith, can be seen, even in the immediate vicinity of the surface. (Credit: Jaumann et al. 2019, Science)

Studying the compositions of these rocks also revealed small bright “inclusions,” common in meteorites believed to come from asteroids. Because watery environments tend to destroy inclusions, their presence on Ryugu suggest that this asteroid’s past was likely a drier one.

Finally, there’s that lack of finer materials. Simple friction and other forces in space should result in such smaller particles, so their absence suggests some process is removing them — but the authors aren’t sure what that could be. “The absence of dust is not easily explained,” they write.

Ryugu is a near-Earth asteroid, meaning its orbit takes it near our planet’s vicinity. The better we understand its makeup and what’s happening to its surface, the better prepared we ever are in case one of the thousands of other NEAs ever wander dangerously close. Asteroids are also remarkably well preserved, since there’s not much to erode them out in space. So by studying them, astronomers are also studying what conditions were like in the solar system’s earliest days, when most asteroids formed.