For centuries, almanacs have served as valuable scientific documents that helped track heavenly bodies, the tides, planting seasons and more. But how good are they at predicting the weather? 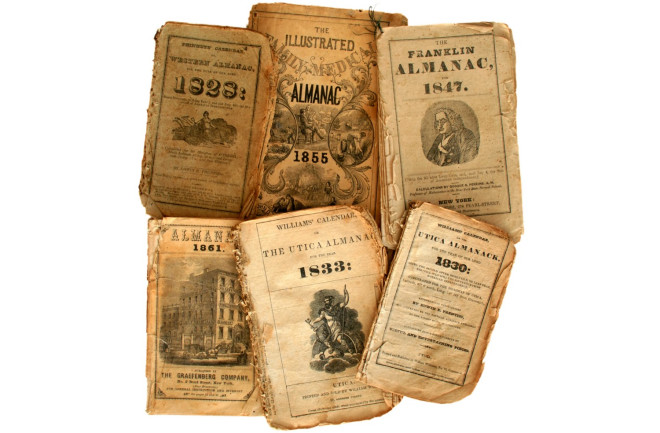 The American folk singer Lee Hays used to say that in the farm country where he grew up, a family might have only two books in the house: The Bible, to prepare them for the next world, and an almanac, to help them through this one. Even today, almanacs — though less authoritative than they once were — retain a place in American life, especially rural life. Published annually, they typically offer a wide array of information about the coming year: timetables for the rising and setting of the sun and moon, for the tides and the constellations, and for eclipses and meteor showers, along with dates of moveable holidays and feast days. But an almanac is more than a calendar. It’s a book for predicting the future — certain aspects of it, anyway.

Since ancient times, astronomers have tracked heavenly bodies and compiled charts to forecast their future movements. Cuneiform tablets dating to the fourth century BCE show that the Babylonians devised complex geometrical formulas to predict the position of Jupiter in the night sky. The earliest almanacs were collections of tables predicting the movements of the sun, moon and observable planets among the fixed stars. The first to appear in Europe was compiled in 1088 CE at Toledo, Spain, under the supervision of the great Islamic astronomer Abu al-Zarqali. (The lunar crater Arzachel is named for him.) The word “almanac” first appeared some two centuries later, in a treatise by the English philosopher Roger Bacon; despite its sound, it has no identifiable Arabic root, and is likely a pseudo-Arabic nonsense word.

With the advent of the printing press, almanacs became highly popular across Europe. By the late 16th century, almanacs were outselling every English-language book but the Bible. Along with astronomical tables, they now offered a calendar of saints’ days, practical advice on farming and household management — such as favorable dates for planting certain crops or for breeding livestock — and prognosticated the weather, just as today’s almanacs do.

Almanackers of old, though, made prophetic claims far more grandiose than a rainy April. Astronomy and astrology were not yet considered distinct disciplines, and many almanacs claimed to read the future in the stars. (Nostradamus began his career as a prophet with a series of almanacs published in the 1550s.) By the 17th century, English almanacs in particular were predicting plagues, earthquakes and other calamities with such profligacy that an industry of satirical almanacs sprang up to mock the earnest soothsaying of the others.

Life in the New World

Almanacs appeared in America within a single generation of the first English settlements, with An Almanac Calculated for New England appearing in 1639. Publishers in Philadelphia later produced almanacs that were read all over the colonies. The most popular of these was Poor Richard’s Almanack, edited and written by Benjamin Franklin. Over its 25-year run, from 1732 to 1757, Poor Richard was a sensation, reinventing the almanac for American sensibilities. Franklin wrote to entertain as well as to instruct; along with calendars, tables, and weather forecasts, each edition of Poor Richard contained mathematical puzzles, poetry, aphorisms and news items that formed a running story, encouraging readers to buy the next year’s edition.

The familiar Franklin persona — the pithy sayings, the thrift and enterprise, the boundless curiosity — has its origins in Poor Richard. Its cultural impact was massive. Collections of witticisms drawn from its pages became bestsellers in their own right, and many of its proverbs are still familiar to every American: Fish and visitors stink in three days. Make haste slowly. Three may keep a secret, if two of them are dead. Even “No pain, no gain” is a variation on one of Franklin’s sayings.

Today’s almanacs no longer indulge in prophecy, as a rule, with the exception of one topic: the weather. Both the Old Farmer’s Almanac and the competing adjectiveless Farmer’s Almanac give a long-range forecast for conditions throughout the coming sixteen months.

Many meteorologists are skeptical of these forecasts. Penn State climatologist Paul Knight noted that the publications’ use of vague language results in “predictions” so broad as to be effectively meaningless. Further, their reliance on precedent — using weather patterns from past years to extrapolate the future — requires no real scientific skill.

Though both publications make extravagant claims for their correctness — each declaring that its forecasts have, by its own metrics, an average accuracy of eighty percent or more year-over-year — objective examination casts doubt upon their assertions. A 1981 study compared five years’ worth of Old Farmer’s Almanac predictions to the recorded conditions in cities across the almanac’s sixteen regions, and found that the forecast was about fifty percent accurate — no better than random chance.

Even if the almanac-makers know something that the meteorological establishment doesn’t, though, their refusal to reveal their predictive methodology remains irksome to critics like Knight. Along with accepted meteorological tools like computer-aided climate models, almanac prognosticators claim to factor in phenomena such as sunspots, which are not proven to affect terrestrial weather. Their exact methods, however, are closely guarded trade secrets.

If the editors of an almanac truly have an advanced formula for making long-range weather forecasts, Knight argues, subjecting it to peer review — exposing its weaknesses, building on its strengths — will result in further improvement of the formula, as well as advancing meteorology overall. Their decision to keep secrets in pursuit of a commercial monopoly impedes the progress of science.

Benjamin Franklin would agree. In addition to his career as a maker of almanacs, Franklin was a prolific inventor; but he never sought to patent any of his creations. “That as we enjoy great advantages from the Inventions of others, we should be glad of an opportunity to serve others by any invention of ours,” he wrote. “And this we should do freely and generously.” Heaven knows, Franklin had nothing against making an honest dollar. But scientific knowledge must be shared if this world is to have a future worth predicting.